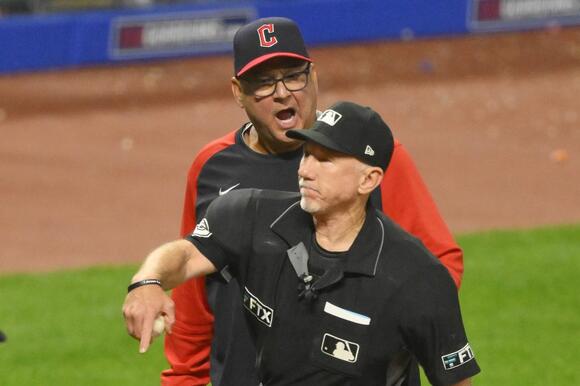 CLEVELAND, Ohio (92.3 The Fan) - It was in the top half of the opening frame of a Tuesday night matchup between the Cleveland Guardians and the Detroit Tigers. With two outs and a runner on second, shortstop Mike Freeman fielded a wayward ground ball and threw home to seemingly nail baserunner Javier Baez for the third and final out of the inning.

Only, the Tigers challenged that Guardians catcher Austin Hedges had blocked the plate.

The call was replayed and reversed, leading to a Kerry Carpenter 2-run home run, a 3-run inning for Detroit, and an eventual 4-3 Tigers victory over the Guardians at Progressive Field.

Zach Plesac dropped to 2-11 in another frustrating outing, in which the right-hander allowed nine hits and four earned runs while striking out three and walking three over 5.1 innings. Plesac spoke after the game about the reversed call at home, which would have gotten the Guardians out of the inning with no runs allowed.

"We got the third out. It was clear...I don't understand how it was interference if he touched the plate. Usually interference means he blocked him from touching the plate."

MLB rules that a catcher " is not permitted to block the runner's path to the plate unless he is in possession of the ball, though blocking the path of the runner in a legitimate attempt to receive a throw is not considered a violation. The runner can be ruled safe if the umpire determines the catcher violated this rule. " Per a September 2014 referendum, "the runner may still be called out if he was clearly beaten by the throw." 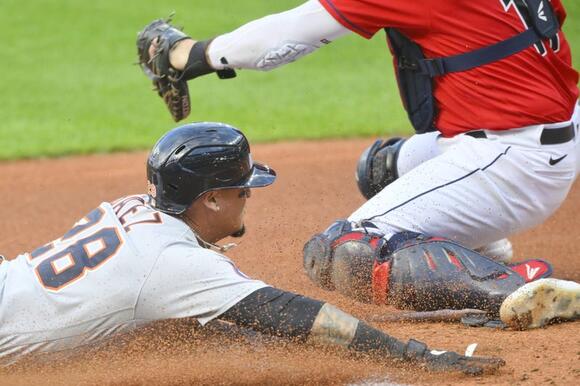 Plesac's batterymate Hedges had strong words for the call and ruling after the contest:

"First of all, it cost the game. The play has been called a few times now recently that really has never been called before. For some reason, [the league offices in] New York feels like they need to take over the game and change the way the game is played. Guys are just out. There are plays at home that are beating the runners and for 150 years, you're out. And now, we're calling some type of rule that is really tricky to define. And to be able to take the game into their own hands that way and to - first of all, that cost one run automatically and then what ended up (transpiring). Honestly, it's a disgrace. It's embarrassing. I think New York owes Zach Plesac, specifically, an apology, because they took the game out of his hands.

Hedges would later add: "It's too bad when we play a sport where we get held accountable. When we say something, we get held accountable. We get mocked. We get shamed. There's no accountability on their part right now. And that's really, really sad. I don't know why. But there needs to be a little bit of - we talk about equality in this world right now. There ain't no equality with that. These guys are going out there with no responsibilities. They say, 'Okay, here's a play where I can show my power. Here's a play where I can take over the game.' And that's not the game that we play. That's not the game that we've played forever. They're trying to take over the game and they're trying to change the game and it's disappointing. For a team that goes out there and fights every single night to win every game, for it to cost us a game when we're trying to win a division, we're trying to make the playoffs, we're trying to do something special, and for it to be taken out of our hands like that is a disgrace and it's extremely disappointing."

After the call overturn, Plesac would allow a 2-run home run to Kerry Carpenter to make it 3-0 Tigers after the opening frame, but the Guardians would scratch one back on a fielder's choice.

In the top of the 3rd, Hector Castro roped an RBI double to make it 4-1 Tigers, and the score would remain that way until the 7th inning, when Freeman scored on a Myles Straw grounder to make it 4-2.

Cleveland would close the gap to 4-3 on an 8th inning Jose Ramirez RBI single - his 95th run batted in on the season - but the Guardians, who were 2-for-9 with runners in scoring position on Tuesday, could not tie the game in the frame.

In the bottom of the 9th, more chaos ensued.

With one out and a runner on third, Straw swung at a low 2-strike pitch that initially looked to have been called foul - at least, according to Cleveland manager Terry Francona.

"I thought he called 'foul ball', and that's what I was arguing because I can't imagine they could overturn it from where they were. But I guess what they overturned was that he caught the ball."

Francona would protest the ruling and be ejected by home plate umpire Lance Barksdale, as the Tigers would close the game one batter later.

Joe Posnanski: The Guardians will be dangerous in the post season because they're scrappy and put the ball in play

Are the Guardians prepared for a post season run? Joe Posnanski says they’ll be underestimated and dangerous. Hear why when he joined Baskin and Phelps!
CLEVELAND, OH・2 DAYS AGO
92.3 The Fan

Al Pawlowski talks with Spencer German filling in on Chico After Dark about the Guardians season, how young the roster is, Terry Francona’s role as a manager, and the Guardians moving forward into the post-season.
CLEVELAND, OH・2 DAYS AGO
92.3 The Fan

Jason Lloyd on Guardians: They can get swept in the first round or they could go to the World Series

Jason Lloyd shared his thoughts on the Guardians’ playoff chances and what they did to win the AL Central. Thoughts on whether or not Jacoby Brissett’s play can hold up during the season. Expectations for the Cavs this season with Donovan Mitchell.
CLEVELAND, OH・2 DAYS AGO
92.3 The Fan

Ellis Burks: The Guardians' hitting style won't hurt them in the post season

Will the Guardians’ lack of home run power hurt them in the post season? Ellis Burks says no, because they know how to get guys on base and put the ball in play. Hear the full conversation with Baskin and Phelps!
CLEVELAND, OH・2 DAYS AGO

Cleveland Guardians pitcher Aaron Civale will start this Friday for Cleveland against the Royals, while Zach Plesac’s start has been pushed back a day to Saturday.
CLEVELAND, OH・13 HOURS AGO
92.3 The Fan

Daryl Ruiter: There is a chance the Browns make a few more roster moves this week

What are the Browns’ options at defense? Daryl Ruiter says they have a few on the depth chart but could make some roster moves this week. Hear the full conversation with Baskin and Phelps!
CLEVELAND, OH・1 DAY AGO
92.3 The Fan

Daryl Ruiter: This might be a defense optional kind of game in Atlanta

Daryl Ruiter talks with Spencer German filling in on Chico After Dark to talk about the Cleveland Browns match-up with Atlanta, how he believes the defense may not be a huge factor in the game, and more about what the Browns can expect in Week 4.
CLEVELAND, OH・2 DAYS AGO
CNN

The Miami Dolphins quarterback Tua Tagovailoa was taken off the field on a stretcher on Thursday during a game against the Cincinnati Bengals, after suffering apparent head and neck injuries -- less than a week after being injured in another game.
CINCINNATI, OH・31 MINUTES AGO

Matt Underwood: Guardians have been riding this crest of momentum, a lot of good things happening at the right time

Matt Underwood talks about this team’s growth this season, the formula for success for this lineup, what he feels the turning point for this team was during the season and whether Terry Francona should be the manager of the year.
CLEVELAND, OH・2 DAYS AGO
92.3 The Fan

Catcher Bo Naylor was promoted to the Cleveland Guardians’ taxi squad prior to Thursday’s game against the Tampa Bay Rays. Naylor, whose brother Josh also plays for Cleveland, hit 21 home runs and stole 20 bases in the minor leagues this season.
CLEVELAND, OH・15 HOURS AGO
92.3 The Fan

How well are the Guardians prepared to enter the post season? Guardians hitting coach Chris Valaika says their prep starts in the minor leagues. Hear the full conversation with Baskin and Phelps!
BASEBALL・2 DAYS AGO

Cleveland Guardians starting pitcher Zach Plesac is expected to make his first start off the injured list on Friday against the Kansas City Royals at Progressive Field. Plesac is 3-11 with a 4.39 earned run average in 23 starts this season.
CLEVELAND, OH・2 DAYS AGO
92.3 The Fan

Nick Kostos: It's well within the range of outcomes for the Cavaliers to win 50 games this year

What are the latest betting lines for the weekend and the weeks ahead? Nick Kostos joined Baskin and Phelps to share the latest lines and possible outcomes.
CLEVELAND, OH・1 DAY AGO
92.3 The Fan

Wes Durham talks about the Browns’ matchup with the Falcons, Atlanta’s identity under head coach Arthur Smith, what the Browns’ defensive focus will be against the Falcons offense, how Cleveland can attack this Atlanta defense and more.
ATLANTA, GA・14 HOURS AGO