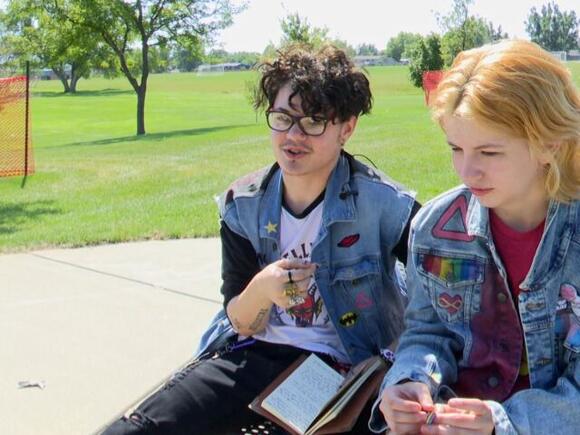 It was a frightening Monday night for hundreds of families when shots rang out on the Midway of the Montana Fair at MetraPark . A flood of people poured out of the gates while others hid on the fairgrounds.

Palmieri, 18, was waiting in line for a carnival ride when she says a confrontation began just a few feet away. She watched as a man said something to a group of guys. When that man walked away, she said the group of men followed.

“When they were about to jump them, the guy quickly pulled out a gun and shot them,” Palmieri said.

What ensued after was chaos.

“And then everybody started screaming, 'Gun!' and running,” said Roman Lestrange, another witness. He said he heard several shots before hysteria hit the crowds.

“We would have been trampled if a carnie hadn’t pulled us away,” Lestrange said.

He said carnival workers rushed into action, pulling kids and elderly folks out of the way so they wouldn’t get hurt.

A couple of his friends were waiting by the bumper cars when they saw a stampede of kids running toward them.

“As they’re running past us, they’re yelling, ‘you guys got to get the eff out of here, there were gunshots,” said another witness, Ewen Barker.

Logan Brost and Baker said several fair goers passed out before their eyes, overcome by shock. They feel lucky they weren’t in the cross hairs.

“We were at that area a few minutes before that happened, 10, maybe 20. If we hadn’t left when we did, that could have been us,” Brost said.

While many fled the fair, others hid for safety. Haley Delaware was bartending at the Super Joe’s Dome when shots were fired.

“I just remember seeing tons of people running out. I was like ‘oh my god’. People were just shouting,” Delaware said.

She and her coworkers hid in a liquor shed behind the dome, trying to stay quiet.

“We were all kind of just praying that what was happening wasn’t as terrible as we were kind of picturing it was,” Delaware said.

As fair-goers raced toward the exits, Yellowstone County sheriff’s deputies rushed toward the gunfire, eventually chasing a man into a pond where he was apprehended. That man was later released without any charges.

“The MontanaFair should be somewhere you can go and have fun and ride rides and not be in fear of getting a loose bullet into you,” Palmieri said.

Yellowstone County Sheriff Mike Linder said one person suffered a leg injury from the shooting. Authorities believe the people involved in the shooting all knew each other, and it was not a random event

montana is going full woke huh? the parents allowed the extremist to quietly slide into their school system and indoctrinate they're children.. kids are very impressionable, hence why they think being different by following the trend of being woke and rebellious is "cool" .. none of this happened yesterday, this has been a long, slow, quite and slick approach with a long game agenda. if it happened in ND,MT and WY, it can happen anywhere

All of the drama, none of the facts. That passes for news in 2022. Five minutes I'll never get back...

What a bunch of drama kings & queens. Good grief! It was 1 shot fired. ONE! And Sheriff’s Deputies were all over it.

Friday did not get off to a good start for Nadia Stryker. Someone had broken into her brand new Jeep overnight.
BILLINGS, MT・1 DAY AGO
Q2 News

A house in the hills south of the Yellowstone River in Billings was completely destroyed by a fire early Saturday morning. Multiple reports said flames could be seen from miles.
BILLINGS, MT・1 DAY AGO
Q2 News

Most health and law enforcement organizations in Billings agree that substance abuse is the No. 1 problem in the city. It's why Substance Abuse Collect was founded in 2017.
YELLOWSTONE COUNTY, MT・2 DAYS AGO
Q2 News

She booked the trip six months ago, never imagining she would end up vacationing in a really bad hurricane.
MONTANA STATE・2 DAYS AGO

Montana avenue and 24th street in Billings is tough place to cross the street for pedestrians. A brand new cross walk that was unveiled today aims to change that.
BILLINGS, MT・2 DAYS AGO
Q2 News

Knudsen said he is meeting with law enforcement and visiting schools across the state trying to educate people about what he described as the "staggering" increase of the lethal drug.
BILLINGS, MT・3 DAYS AGO
Q2 News

Police received a report of three men involved in an altercation around 5:30 p.m. on the 1900 block of Burnstead Drive, according to a tweet from Billings police.
BILLINGS, MT・8 DAYS AGO
Q2 News

On Thursday nights in a back hallway of the First Congregational church in downtown Billings, you can find three Apsáalooke Nation members sharing their stories of addiction to try and help others.
BILLINGS, MT・3 HOURS AGO

“I’ve never seen another albino of anything in the wild, so it’s pretty rare to see. It’s pretty exciting to see one in such closer proximity.”
BILLINGS, MT・4 DAYS AGO
Q2 News

One of the items recovered was reported stolen in 2017, according to the Yellowstone County Sheriff's Office.
BILLINGS, MT・9 DAYS AGO
Q2 News

The incident happened around 11:30 p.m. Friday and forced the closure of East Bridger Road at the railroad crossing and South River Road at the Rushwater Road intersection.
BRIDGER, MT・1 DAY AGO
Q2 News

Elijah Tidswell is one of the candidates for the Montana Senate in District 24. Tidswell turned 18 in June, which means that if he wins he'll be the youngest person ever elected in Montana.
BILLINGS, MT・2 DAYS AGO

Two men accused of being involved in a large theft ring based on the Billings South Side were charged Friday in Yellowstone County District Court.
9 DAYS AGO
Q2 News

Since December 2021, the Billings Holiday stores have been robbed 8 times--more than any other store in the city
BILLINGS, MT・10 DAYS AGO
Q2 News

Bond was set at $100,000 Thursday for a woman accused of setting fire to a downtown Billings church and a state correctional facility.
BILLINGS, MT・10 DAYS AGO
Q2 News

Bond was set at $50,000 Tuesday for an 18-year-old man accused of shooting two other teenagers during a violent late-night encounter on the Billings Rims.
BILLINGS, MT・12 DAYS AGO
Q2 News

Dog Tag Buddies has connected over 100 vets with shelter dogs, giving them the resources they need to train them to become service animals, and it’s at no cost to the veteran.
BILLINGS, MT・4 DAYS AGO
Q2 News

Fraser is a case study in tenacity and hard work. He lost nearly a dozen elections in his lifetime, but persisted, eventually winning the top city administrator spot in a divided race.
BILLINGS, MT・5 DAYS AGO
Q2 News

An 18-year-old woman accused of shooting a man who reported her to police for stealing his car was charged Tuesday.
BILLINGS, MT・12 DAYS AGO
Q2 News

Billings violent crime on trend with previous years, but teen crime stands out

Fresh statistics from the Billings Police Department show reports of shootings and stabbings are on par with numbers the department has seen over the last couple years.
BILLINGS, MT・12 DAYS AGO