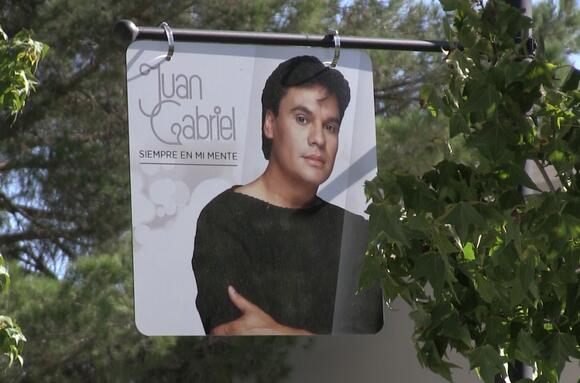 The “Juangabrielisimo” festival celebrating the late singer Juan Gabriel kicks off with a parade at 10 a.m. Sunday along Avenida Heroico Colegio Militar in Juarez. It includes concerts the following week at Plaza de la Mexicanidad – the big red “X” – the Old Customs building Downtown and Juarez Avenue south of the Paso del Norte U.S. port of entry. Charter buses on South Santa Fe Street will take El Pasoans to Thursday night’s Aida Cuevas concert and bring them back for $15.

At a news conference Tuesday at the Mexican consulate in El Paso, Juarez officials emphasized how people on both sides of the border love Juan Gabriel’s music, and how they’re going out of their way to ensure visitors are safe during events coinciding with the sixth anniversary of the singer’s death.

“I want to reassure our brothers in El Paso, Las Cruces and New Mexico that they should not worry about attending these events because your safety is completely guaranteed,” said Ivan Perez Ruiz, Juarez’s director of economic development. “Unfortunately, because of some situations, Juarez has again found itself in a very complicated situation. But these are isolated events.”

The ”isolated events” of last Thursday began with a fight between two gangs inside a Juarez prison and spread to the streets of Juarez. Patrons were shot dead at convenience stores and on city streets; four members of a radio crew broadcasting from a pizza shop were slain as well.

Police arrested nearly a dozen people, including some at a home with a shrine to “La Santa Muerte,” the personification of death often worshiped by drug traffickers.

The violence extracted a heavy toll on the city’s economy. A survey by the Juarez Chamber of Industry found that nine out of 10 businesses in the city either shut down for at least one day after Thursday’s attacks or lost revenue. Some businesses remained closed the entire weekend out of fear.

Pressed by Border Report about how they intend to keep visitors safe at the festival from further drug violence, visiting Mexican officials said they will keep a heavy uniformed police presence at the events, monitor nearby streets through closed circuit cameras and park squad cars on nearby access roads.

Felipe Rojas, the curator of the Juan Gabriel House where the singer used to live and where his cremated ashes are kept, said border residents are ready to move on and enjoy the weeklong musical tribute in Juarez.

“Juan Gabriel left a great legacy and he lives on in every song he left. His songs make us feel proud of our city, of our people,” Rojas said. “ He distinguished himself by being a different kind of artist, and our people, our border are also different.”

“We are working very hard to promote Juarez as a safe destination. We want to bring back the days when many visitors could be seen walking our streets, shopping at the market, having a good time,” Armendariz said. “But with these types of events, it seems we take three steps back after taking two steps forward. Still, we’re not giving up. We’re inviting people to come and the (Juan Gabriel festival) is the perfect opportunity to do so.”

Jesus Mendez is one of the dozens of paroled migrants the U.S. Border Patrol started releasing Wednesday due to severe overcrowding at its processing centers, local officials say.
EL PASO, TX・24 DAYS AGO
Border Report

Pugs reunited with migrant owners at end of 3,000-mile trek from Venezuela

"You never know what the Border Patrol is going to encounter at the border. We’re trying to be humane, not only with the people, but also with the animals we encounter.” El Paso Border Patrol Sector Chief Agent Gloria I. Chavez
EL PASO, TX・10 DAYS AGO
Border Report

Hundreds of people in Juarez, Mexico, on Monday crossed the Rio Grande into El Paso on foot, in hopes of requesting political asylum.
EL PASO, TX・21 DAYS AGO
Border Report

A civils rights organization on Monday launched a binational campaign to document abuses against migrants and minority communities in the Southwestern United States and in Mexico.
EL PASO, TX・59 MINUTES AGO

Mexican cops arrest pair wanted in U.S.; one has murder warrant out of Dallas

Haitian migrants who are frustrated after months, and sometimes years, of trying to cross into South Texas from Reynosa, Mexico, are acting out at area shelters and protesting, Border Report has learned.
IMMIGRATION・20 DAYS AGO
Border Report

"Our southern part of the beach has been closed 100 percent of the time this year, the main part of our beach 135 days, and Coronado has been closed up to 60 days most of the summer."
CALIFORNIA STATE・3 DAYS AGO

Locals have built a wall that blocks access to a migrant shelter in Mexico.
IMMIGRATION・26 DAYS AGO
Border Report

Mexican authorities say they are sending soldiers and additional police officers to a town in the state of Zacatecas where six municipal policemen were shot dead Wednesday in broad daylight.
EL PASO, TX・4 DAYS AGO
Border Report

Texas state officials say they have arrested a man in connection with a Wednesday morning shooting in Hudspeth County that left a man with a gunshot wound to the face.
HUDSPETH COUNTY, TX・4 DAYS AGO

According to sources, Border Patrol stations in the San Diego Sector have become saturated with migrants and don't the room for others who are being apprehended.
SAN DIEGO, CA・26 DAYS AGO
Border Report

Mexico calls on U.S. for help in stopping delivery of guns to cartels

"Mexico in its territory is seizing five times more weapons headed to Mexico on its side. You have no reason on (your) territory to let someone with weapons cross into Mexico when you know it is illegal to have those weapons in our country. [….] We are asking, at the very least, for a similar effort." Marcelo Ebrard, Mexico's foreign minister
POLITICS・25 DAYS AGO
Border Report

For the second time in a month, Republican lawmakers and candidates this week have been espousing the notion that "rape trees" exist on the South Texas border, which they say are areas where migrants are sexually assaulted and the trees are marked with their hanging undergarments. But extensive interviews with several border sheriffs and federal officials by Border Report has found no evidence that these trees actually exist. And some question whether this is misinformation being spread by the GOP just weeks before elections.
TEXAS STATE・5 DAYS AGO

Former Mexican President Benito Juarez, whose city across the border from El Paso, Texas, bears his name since 1888, is one of the iconic characters honored by the 12 Travelers Memorial of the Southwest with a bronze statue.
EL PASO, TX・13 DAYS AGO
Border Report

El Paso County Commissioners as early as Monday could begin moving toward signing a lease and awarding a bid for a Migrant Support Services Center to help with releases of paroled migrants onto the streets of El Paso.
EL PASO COUNTY, TX・17 DAYS AGO
Border Report

Watching a crane place the larger-than-life bronze statue of former Mexican President Benito Juarez on a stone slab at the Chamizal National Memorial on Wednesday was a big relief for Ethan Houser.
EL PASO, TX・12 DAYS AGO