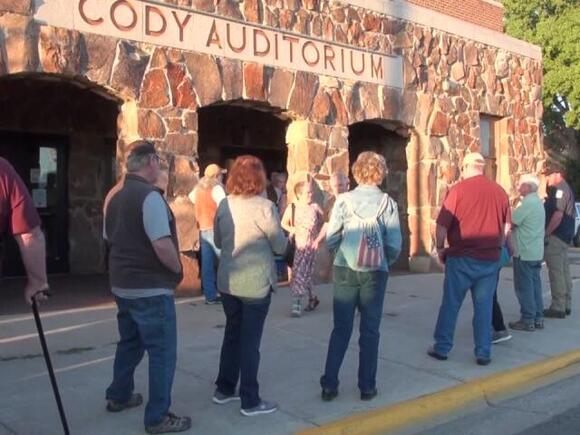 Polls show one of her challengers, Trump-backed Harriet Hageman, at 30 points ahead of Cheney.

Wyoming has the smallest population of any state in the nation, and yet, all eyes were on the vote here. And, voting was strong. People lined up outside the door in Cody since 7 a.m.

“I was born and raised in Cody, I voted for 50 years in this exact location. Cody auditorium, central Cody and this is the first time I’ve ever seen a line outside Cody, and it’s even more unusual that it’s a primary election," said Cody voter Dewey Vanderhoff.

Park County Clerk Colleen Renner reported absentee and early voting set a record, too. She said almost 4,600 people had their votes in by Monday. It was the most in a primary since 2020.

MTN News asked people after they voted to tell us who they chose for Wyoming’s one Congressional seat.

“I don’t like the one that’s in there now because she doesn’t represent Wyoming," he said.

Cheney has taken heat in deep-red Wyoming largely as her work with the January 6 Committee and her efforts to tie former President Donald Trump to the violence at the U.S. Capitol on Jan. 6, 2021. Trump won Wyoming in 2020 by more than 40 points.

Cheney, who's seeking her fourth term as Wyoming's lone member of Congress, had support from some voters in Cody.

“I voted for Liz Cheney, because I respect her integrity. I feel she truly represents leadership," said Cody voter Paula Dimler.

Another Cody Voter, Anissa Bree, said, “I voted for Harriet Hageman because I feel she has the best interests of Wyoming at heart.”

Most of the voters MTN News interviewed had given the nod to the Hageman, and even Vanderhoff, the Cheney supporter, felt the turnout was not a good sign.

“Turnout looks like an avalanche. That’s bad news for Liz Cheney," he said.

Wyoming allows people to change parties on election day, and some Democrats are crossing over to vote for Cheney.

Knudsen said he is meeting with law enforcement and visiting schools across the state trying to educate people about what he described as the "staggering" increase of the lethal drug.
BILLINGS, MT・5 HOURS AGO
Q2 News

Natural disasters often times help bring teams together that may not work with each other on a normal basis.
MONTANA STATE・16 HOURS AGO
Q2 News

What started as a fun way to connect with people around the country during the start of the COVID-19 pandemic has now turned into a full-time gig for this Huntley resident.
MONTANA STATE・2 DAYS AGO

D.C Alhert lived in Florida for most of her life before relocating to Ennis, Montana a little over three years ago and knows hurricanes are part of deal when you live in the south.
FLORIDA STATE・21 HOURS AGO
Q2 News

A western Montana woman’s post is going viral on Facebook after she claims she shot, killed, and skinned a wolf pup in Flathead County. But the animal she hunted wasn’t a wolf, but a dog.
FLATHEAD COUNTY, MT・2 DAYS AGO
Q2 News

Teske moved to Billings when she was 12-years-old, but still spent summers on the farm while growing up and feels a deep connection to those roots.
BILLINGS, MT・22 HOURS AGO
Q2 News

As the storm surges on, it has now hit western Cuba and is moving into Florida. Katy Crews and her family made the quick decision to leave their house and flee.
MONTANA STATE・1 DAY AGO

The youth suicide rate in Montana between 2011 and 2020 was more than double the national rate for the same age group.
MONTANA STATE・9 DAYS AGO
Q2 News

Warmer and dry through Thursday afternoon, Rain with a cool down to end the week

Another warm and dry day on tap. Tomorrow (Wednesday) will be our warmest day before cool down comes heading into the weekend.
MONTANA STATE・2 DAYS AGO
Q2 News

A new study conducted by the U.S geological survey, Montana Fish Wildlife and parks and the University of Montana suggests a third of the state’s waters may be unsuitable for trout by the year 2080.
MONTANA STATE・11 DAYS AGO

Yellowstone National Park has fewer than 20 days to meet its own deadline. The park set October 15th as the goal for reopening flood-ravaged northern roads.
COOKE CITY-SILVER GATE, MT・3 DAYS AGO
Q2 News

11 recruits come from Billings and one from Lockwood, taking part in a 14-week long training program
BILLINGS, MT・8 DAYS AGO
Q2 News

Out and About: Red Lodge candy store offers unique candy with slice of history

There’s candy as far as the eye can see at the Montana Candy Emporium in Red Lodge. However, you’ll find something else that you won’t find at any other candy shop.
RED LODGE, MT・7 DAYS AGO
Q2 News

#JusticeforMarshall is circulating online in one family's efforts to find answers to their loved one's mysterious death
LOCKWOOD, MT・9 DAYS AGO