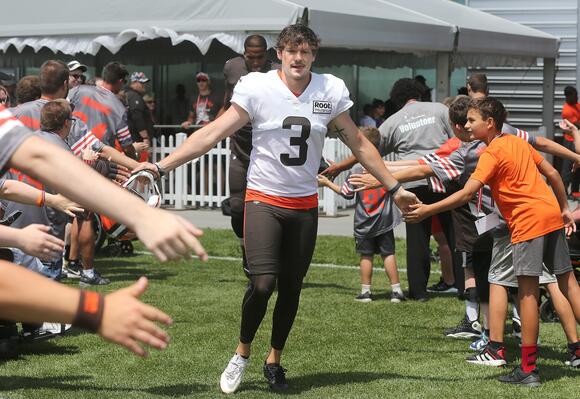 BEREA, Ohio (92.3 The Fan) – Kicker Cade York was voted as this year’s winner of the Maurice Bassett award, which goes to the most outstanding rookie in camp.

York had another perfect 6-6 afternoon Tuesday, including a 54 yarder that sailed through the top of the uprights and would have been good from 60-plus.

“I go back to the spring. He came in and kicked really well in the spring,” head coach Kevin Stefanski said. “I think he works hard at his craft. That is really the big part for me with all these rookies, but Cade in particular was working hard every single day. There are days he does not kick where he is working on his body or he is watching the tape and those type of things.

“Just understand that all of these rookies while they may flash here and earn that distinction, they have to continue to work.”

Nick Harris and Dawson Deaton were placed on injured reserve. Harris suffered a knee injury on the second play of the preseason opener Friday night at Jacksonville and Deaton went down with a knee injury during Monday’s practice.

Stefanski would not disclose the specifics of either injury.

The team terminated the contract of defensive tackle Sheldon Day, who was on the non-football injury list since camp began and tackle Elijah Nkansah was waived with an injury designation.

Linebacker Silas Kelly was also waived from injured reserve and receiver Easop Winston was claimed off waivers. Winston spent time with he Rams and Saints. Last year for New Orleans, he appeared in three games where he had one catch for 5 yards and 10 punt returns for 119 yards.

Finish strong – Both the first- and second-team offenses were successful in their late-game situations to end practice Tuesday.

With less than a minute on the clock and the Browns ‘trailing’ on the scoreboard 24-21, Jacoby Brissett found Anthony Schwartz, who made a beautiful over-the-shoulder catch, for a 36-yard touchdown.

Deshaun Watson capped his possession by hitting Miller Forrestall, who strolled into the end zone, for 24-yard TD while Richard LeCounte III expressed his frustration at getting beat. On the previous play Watson floated a beautiful ball to Mike Harley Jr., who appeared to make the catch against tight coverage from Parnell Motley but was ruled out of bounds.

Back in there – Right tackle Jack Conklin took reps with the first team offense Tuesday – his first 11-on-11 work since suffering a torn patellar tendon last November 28 in Baltimore that ended his season.

Conklin had previously been limited to individual and positional work.

That’s a wrap – The Browns closed out the open portion of training camp for fans Tuesday. Practice ended a little early so players could head to the stands surrounding the field to sign autographs and take pictures.

“The support has been unbelievable, which we really should not be surprised from our fans,” Stefanski said. “Every single day just having so many families out here and so may kids out here, it has been outstanding. Northeast Ohio, they love their Brownies, and we feel it when we are out here. I want to say a special thank you to all of the fans who came out today, the last couple of weeks or whatever it has been. Definitely appreciate their support.”

Final Puppy Pound count – Eight puppies were adopted Tuesday bringing this year’s camp total to 69. Since the program’s launch in 2015, 694 puppies from the Northeast Ohio Society for the Prevention of Cruelty to Animals (SPCA) have been adopted by Browns fans at training camp practices.

DE Myles Garrett remains excused due to a personal matter.

DE Jadeveon Clowney and receiver Amari Cooper worked on the side.

Up next – Players off Wednesday. Joint practices with the Eagles, which are closed to the public, begin Thursday.

Daryl Ruiter: Quite frankly they have two losses because of bad coaching

Daryl Ruiter on what went wrong with Kevin Stefanski’s decision making against the Falcons. Why did Stefanski go away from his game plan with Jacoby Brissett? Thoughts on not kicking the field goal early in the game.
NFL・18 HOURS AGO
92.3 The Fan

Ken and Lima shared their initial thoughts on the Falcons win over the Browns 23-20. Does this game fall on anybody else other than coaching. Did Stefanski outsmart himself? Ken and Lima addressed whether their mad or disappointed in this result?
CLEVELAND, OH・20 HOURS AGO
92.3 The Fan

Defensive ends Myles Garrett and Jadeveon Clowney are continuing to make progress but it’s too early for head coach Kevin Stefanski to project their availability this week plus other notes from Monday.
CLEVELAND, OH・12 HOURS AGO
92.3 The Fan

Jeff Lloyd: The Browns are in a spot where they're comfortable giving (Nick Chubb) the ball

Jeff Lloyd stops by The Barbershop with Garrett Bush to talk about the Browns, the run game, and what to expect in the game vs. the Atlanta Falcons.
CLEVELAND, OH・2 DAYS AGO

The Browns could easily be 4-0, or at least 3-1, but blown opportunities Sunday in Atlanta and then in Week 2 to the Jets are haunting as the schedule is about to get much tougher.
CLEVELAND, OH・10 HOURS AGO
92.3 The Fan

As expected, Browns defensive end Jadeveon Clowney is inactive for Sunday’s game at Atlanta and Myles Garrett could be sidelined a few weeks according to ESPN.
CLEVELAND, OH・1 DAY AGO
92.3 The Fan

Nathan Zegura: Details haunting Browns; 2-2 is certainly not where anybody wanted to be, have to find way to be resilient

Nathan Zegura talks about the Browns’ loss to the Falcons, Kevin Stefanski’s explanation for going for it early in the game, the use of Nick Chubb and Kareem Hunt, the defense’s inability to make a play when they needed to late in the game and more.
CLEVELAND, OH・11 HOURS AGO
92.3 The Fan

Guardians outfielder Steven Kwan was named AL Rookie of the Month for MLB in September, while pitcher Emmanuel Clase took Reliever of the Month honors.
CLEVELAND, OH・10 HOURS AGO

The Browns seek their third consecutive 3-1 start under head coach Kevin Stefanski Sunday in Atlanta but they will be without star defensive end Myles Garrett and could be without three of their four starting defensive linemen.
CLEVELAND, OH・2 DAYS AGO
92.3 The Fan

The Browns fly home from Atlanta wondering what could’ve been following a 23-20 loss to the Falcons that dropped them to 2-2 on the season.
CLEVELAND, OH・1 DAY AGO
92.3 The Fan

Scott Petrak: I do think play calling had a lot to do with the outcome

Should Kevin Stefanski give up the play calling on game day? Scott Petrak says his plays did have a lot to do with the loss. Hear why with Baskin and Phelps!
CLEVELAND, OH・15 HOURS AGO
92.3 The Fan

The Browns downgraded defensive ed Myles Garrett to out Saturday and he will not play against the Falcons following his car accident Monday.
CLEVELAND, OH・2 DAYS AGO

Rams linebacker Bobby Wagner leveled a protester who ran onto the field as his team player the 49ers in Santa Clara.
NFL・22 MINUTES AGO
92.3 The Fan

Steve Helwagen: Everything points to an Ohio State Blowout (vs. Rutgers)

Steve Helwagen talks to Garrett Bush on The Barbershop about the Ohio State Buckeyes-Rutgers Scarlet Knights match-up, the Big 10 as a whole, and more insight on the future of potential super conferences.
COLUMBUS, OH・2 DAYS AGO
92.3 The Fan

Nayl'd it: Bo Naylor throws out baserunner in MLB debut

Bo Naylor got his first taste of the Major Leagues just hours after the Guardians selected his contract from Triple-A Columbus and added to the 28-man roster. Naylor replaced Luke Maile in the 6th inning of Saturday night’s 7-1 loss to the Royals.
CLEVELAND, OH・2 DAYS AGO
92.3 The Fan

Cavaliers forward Evan Mobley will not play Wednesday in Cleveland’s preseason opener against the Philadelphia 76ers. Mobley is projected to be out 1-2 weeks with a right ankle sprain.
CLEVELAND, OH・8 HOURS AGO
92.3 The Fan

The Will to win: Will Brennan belts first-career homer in Guardians 7-5 win

Will Brennan smacked a triple to lead off the game, scoring on a SAC fly by Amed Rosario and followed up with a three-run home run an inning later to spark a 7-5 win over the Kansas City Royals at Progressive field.
CLEVELAND, OH・1 DAY AGO