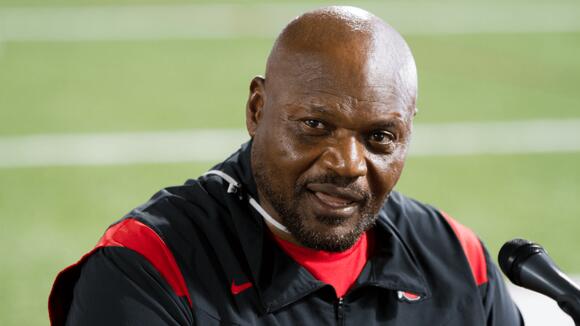 "The day that I stop enjoying coaching and having a passion for what I do, then I’ll do that."

For the last five or so years, Ohio State defensive line coach Larry Johnson has heard rumors of his impending retirement. Yet, as the now 70-year-old heads into his 49th season of coaching at either the high school or college level, he has no plans of stopping anytime soon.

“People ask that question all the time,” Johnson said during his media availability on Tuesday morning. “My retirement plan is way away from here. I enjoy coaching, and the day that I stop enjoying coaching and having a passion for what I do, then I’ll do that.

“I don’t get up in the morning and say, ‘Well, this is it.’ I don’t do that. That’s not the way I function. I get up every morning dying to get into this building and coach those guys. Now, when I can’t do that anymore, it’ll tell me. But right now, I’m not telling myself anything (other than) I’ve got to get going and it’s time to go play a game.”

Johnson likened it to 2019 – Day’s first season at the helm – when he wiped the defensive slate clean (with the exception of Johnson) by hiring co-coordinators Jeff Hafley and Greg Mattison , linebackers coach Al Washington and assistant secondary coach Matt Barnes .

“It’s different terminology, it’s a new language, but football is football and teaching is teaching when it comes down to it,” said Johnson, who has been with the Buckeyes since 2014. “The fact is, I’m a coach, and that’s the most important thing. I was hired to coach football.

“When the day comes that I can’t coach, I won’t coach. But right now, I’m hired to be a coach, so (the turnover) hasn’t bothered me. I know I have a job to do as a coach to make my unit the best unit, and that’s what motivates me every day, trying to find a way to make those guys better.”

Lewis was the second USC transfer in as many years to have an eligibility issue upon his arrival.
COLUMBUS, OH・1 DAY AGO
BuckeyesNow

Day said this year's defense is "by far" the best the Scarlet Knights have had under head coach Greg Schiano.
COLUMBUS, OH・3 HOURS AGO
BuckeyesNow

"I know he’s frustrated, but we’re not as far away as we think."
COLUMBUS, OH・2 DAYS AGO
BuckeyesNow

The Buckeyes wrap up a five-game homestand to open the season against the Scarlet Knights.
COLUMBUS, OH・19 HOURS AGO

Half of the Big Ten's punters are a product of Prokick Australia, a program that helps develop college football players.
COLUMBUS, OH・16 HOURS AGO
All Cardinals

Kyler Murray believes the Cardinals should use James Conner more on offense.
NFL・21 MINUTES AGO
BuckeyesNow

Here's the latest from the Woody Hayes Athletic Center in Columbus.
COLUMBUS, OH・2 DAYS AGO
BuckeyesNow

Olave leads all rookies in receiving yards and is second among rookies in receptions, trailing only former teammate Garrett Wilson.
COLUMBUS, OH・6 HOURS AGO

"I didn’t really have any expectations but to just fly around and do my job."
COLUMBUS, OH・18 HOURS AGO
BuckeyesNow

The Buckeyes unofficially tipped off the 2022-23 season with interviews on Monday afternoon.
COLUMBUS, OH・2 DAYS AGO
BuckeyesNow

Buckeye Breakdown Podcast: What We Learned From Ohio State's Dominant Win Over Wisconsin

Here are our biggest takeaways from the Buckeyes huge win against the Badgers from Saturday night's big football game.
COLUMBUS, OH・2 DAYS AGO
BuckeyesNow

"That’s a great job on his part on being mentally tough to handle that situation.”
COLUMBUS, OH・1 DAY AGO

"We just try to help each other the best we can and help the team win."
COLUMBUS, OH・1 DAY AGO