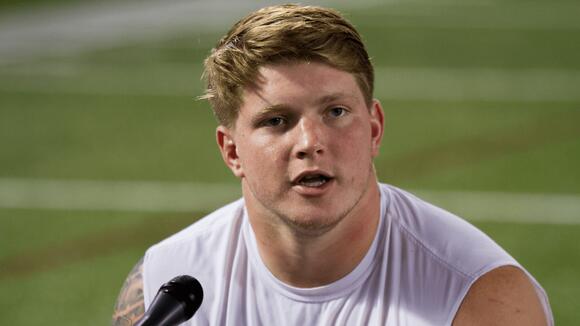 The defensive line is perhaps the deepest unit on the roster this season, with as many as 14 players expected to contribute.

Another day, another step closer to the Sept. 3 season opener against Notre Dame, as Ohio State wrapped up its 11th practice of fall camp on Tuesday morning.

That includes Johnson's plans for the future, Friday's return from injury, Harrison's heightened expectations for himself, Sawyer's growth heading into his sophomore year, Tuimoloau's recruitment, Cage's decision to return for his extra year of eligibility, Vincent's role as a fifth-year senior, Hamilton's familiar path, Williams' offseason weight loss and much more.

You can check out those interviews below, while other position units will continue to be added to our YouTube page throughout the fall. Quarterbacks coach Corey Dennis and select signal-callers will be made available to the media following Thursday's practice, meanwhile.

Big Ten football is back in Columbus. Could this be a potential Big Ten Championship preview on Saturday night?
COLUMBUS, OH・2 DAYS AGO
BuckeyesNow

With Cameron Brown and Jordan Hancock also sidelined, but Buckeyes are down to just three scholarship corners against the Badgers.
COLUMBUS, OH・12 HOURS AGO
BuckeyesNow

Nearly 100 of our favorite shots from Saturday's matchup between the Buckeyes and Badgers.
COLUMBUS, OH・2 HOURS AGO

The redshirt junior has embraced being a tight end and placed emphasis on his route-running this summer.
COLUMBUS, OH・2 DAYS AGO
BuckeyesNow

How did the Buckeyes defense look against the Badgers in the opening 30 minutes
COLUMBUS, OH・10 HOURS AGO
BuckeyesNow

Brown and Johnson got their first career starts in place of Cameron Brown and Denzel Burke, who missed the win over the Badgers due to injury.
COLUMBUS, OH・4 HOURS AGO
BuckeyesNow

There are three games between ranked opponents this weekend, while five others hit the road.
COLLEGE SPORTS・1 DAY AGO

"Let’s go make this the loudest it’s ever been.”
COLUMBUS, OH・19 HOURS AGO
BuckeyesNow

Smith-Njigba missed his second game in three weeks, but the Buckeyes still rolled over Wisconsin on Saturday night.
COLUMBUS, OH・5 HOURS AGO
BuckeyesNow

Who Steps Up For Ohio State Against Wisconsin In Jaxon Smith-Njigba's Absence?

The Buckeyes' top wide receiver ruled out for Saturday's Big Ten opener against the Badgers.
COLUMBUS, OH・14 HOURS AGO

Eichenberg and the Buckeyes' linebackers will be challenged by Badgers running back Braelon Allen.
COLUMBUS, OH・2 DAYS AGO
BuckeyesNow

Here's what we are expecting Saturday up in the Big House when Michigan and Maryland meet on the football field.
ANN ARBOR, MI・2 DAYS AGO
BuckeyesNow

Day said the Badgers "epitomize the Big Ten" because they're physical, well-coached and want to establish the run.
COLUMBUS, OH・2 DAYS AGO
BuckeyesNow

Game Preview: Ohio State’s Toughness To Be Tested Against Wisconsin

The Buckeyes have won eight straight against the Badgers, including three victories in the Big Ten Championship Game.
COLUMBUS, OH・2 DAYS AGO
CBS Baltimore

BALTIMORE -- The Baltimore Ravens have promoted wide receiver Raleigh Webb and linebacker Brandon Copeland from the team's practice squad.The Ravens made the announcement Saturday evening on the team's Twitter account.Copeland, 31, is a Carroll County native. He signed with the Raven's practice squad a few days ago.Head coach John Harbaugh said during a press conference on Sept. 21 that Copeland was "one who kind of sort of got away."Copeland spent last season with the Atlanta Falcons, playing 16 games, three of them starts, and recording 39 combined tackles, two quarterback hits and four tackles for loss.In his six-year career, Copeland played for the Detroit Lions, New York Jets and New England Patriots before joining Atlanta in 2021.A native of Sykesville, Copeland starred at the Gilman School before going on to play with the Penn Quakers at the college level.The Ravens signed Copeland as an undrafted free agent in 2013 and placed him on the practice squad coming out of training camp, but he was released in September and caught on with the Tennessee Titans.
BALTIMORE, MD・6 MINUTES AGO
BuckeyesNow

Game Prediction: No. 11 Tennessee Volunteers vs. No. 20 Florida Gators

Florida has had a brutal schedule so far, while Tennessee has looked as good as it has in a long time. But can they finally get over the pan-handle-sized hump against the Gators?
KNOXVILLE, TN・2 DAYS AGO