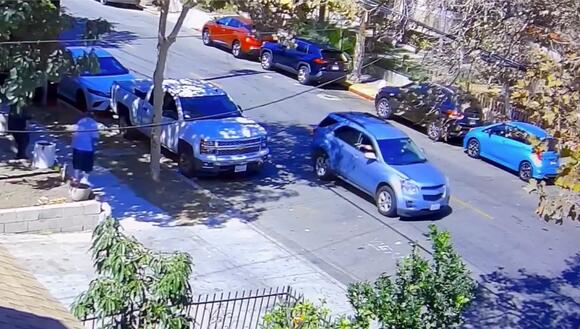 A man was killed in a drive-by shooting in Santa Ana Monday afternoon, police said.

The incident was reported about 3:20 p.m. in the 1700 block of North Spurgeon Street, according to the Santa Ana Police Department.

Responding officers found the victim suffering from a gunshot wound to his upper torso. He was taken to a hospital in critical condition but died.

He was identified as 20-year-old Alex Ruiz.

The shooting is believed to be gang related, and investigators are hoping to speak to any witnesses.

Surveillance video shared with KTLA shows a vehicle pulling up to two men on a sidewalk in a residential neighborhood as someone inside shoots at the victim and the driver takes off.

Police did not give any information about the second person with the victim, or the people in the vehicle that got away. No arrests have been made.

Anyone with additional information about the shooting is asked to call homicide detectives at 714-245-8390 or Orange County Crime Stoppers at 1-855-TIP-OCCS.

California....where only criminals have guns lol Those criminals really follow those laws huh.

A man died Saturday afternoon after he was stabbed multiple times in downtown Los Angeles, according to the Los Angeles Police Department. The stabbing happened around 1:15 p.m. at the intersection of Olympic Boulevard and Wall Street near the Fashion District. Police originally responded to the area for a report of shots fired. Instead they […]
LOS ANGELES, CA・4 HOURS AGO
KTLA

An alleged arsonist and homeless man was arrested in Santa Monica on Sunday after a string of incidents in the area. The Los Angeles District Attorney’s Office says the suspect, John Dean Thomason, 51, is responsible for igniting fires in seven different incidents throughout late August and early September. Santa Monica Police tracked down Thomason […]
SANTA MONICA, CA・1 DAY AGO
KTLA

One wounded in shooting at San Bernardino shopping mall

A shooting at the Inland Center Mall in San Bernardino forced part of the shopping center to be evacuated Friday afternoon. The shooting occurred around 1 p.m. just outside the food court, San Bernardino police told KTLA. Sky5 video showed officers cordoning off the sidewalk next to a mall entrance. Police say the shooting was […]
SAN BERNARDINO, CA・1 DAY AGO
KTLA

Two suspects have been arrested in connection with the killing a 12-year-old boy who was traveling in an SUV in Wilmington late last year, police announced Friday. The two Wilmington residents, identified as 21-year-old Damian Ulysses Martinez, and 19-year-old Gabriel Martinez, were arrested on Tuesday, the Los Angeles Police Department stated in a news release. […]
LOS ANGELES, CA・1 DAY AGO

Police are searching for a driver who struck and killed a bicyclist riding in the Florence neighborhood of Los Angeles Thursday night. The crash occurred around 11 p.m. as the bicyclist was traveling northbound on Wall Street, the Los Angeles Police Department stated in a news release. The vehicle was headed westbound on 61st Street […]
LOS ANGELES, CA・1 DAY AGO
KTLA

One person was shot and several people are being detained for questioning following a road-rage incident in Fontana Thursday morning, police said. The incident unfolded on the westbound 210 Freeway near the interchange with the 215 Freeway in San Bernardino between a black truck and an Audi sedan, authorities told KTLA. One of the drivers […]
FONTANA, CA・2 DAYS AGO
KTLA

Authorities say a man and his three dogs were struck by a vehicle and killed early Thursday morning while walking in downtown Los Angeles. The collision occurred near the intersection of West 5th Street and South Hill Street just before 12:30 a.m. The unidentified victim and his dogs were pronounced dead at the scene. Police […]
LOS ANGELES, CA・2 DAYS AGO
KTLA

A suspect was taken into custody after a shootout with police and a chase that ended with a crash in South Los Angeles Thursday night. The drama unfolded around 9:30 p.m. when police received a “shots fired” call near West 110th Street and South Broadway in the Broadway-Manchester neighborhood. “Community members saw this individual actually […]
LOS ANGELES, CA・2 DAYS AGO

Police on Thursday asked the public for help in their search for a hit-and-run driver who left a woman severely injured in the Westlake neighborhood of Los Angeles over the weekend. The incident occurred Saturday around 8:25 p.m. as the 44-year-old victim was crossing in an unmarked crosswalk at the intersection of North Dillon Street […]
LOS ANGELES, CA・2 DAYS AGO
KTLA

A man believed to be responsible for 68 armed robberies in Los Angeles County dating back to October of last year has been arrested, police announced Wednesday. The robber was dubbed the “Blue Cloth Bandit” because he would use a blue cloth to cover the gun brandished in robberies at gas stations, 7-Elevens and Walmarts, […]
LOS ANGELES COUNTY, CA・3 DAYS AGO
KTLA

A memorial service was held in Montebello on Saturday to remember a man who died after overdosing on fentanyl-laced drugs at a San Bernardino music festival. Eli Rodriguez, 27, was one of two deaths reported during the Nocturnal Wonderland Music Festival. The four-day electronic dance event ran from Sept. 16 to Sept.19 at the Glen […]
SAN BERNARDINO, CA・7 HOURS AGO
KTLA

Three people, including a father and son, have been charged in connection with the fatal shooting of rapper PnB Rock, officials announced Thursday. Freddie Lee Trone, 40, was charged with one count of murder and conspiracy to commit robbery, along with two counts of second-degree robbery, according to the Los Angeles County District Attorney’s Office. […]
LAS VEGAS, NV・2 DAYS AGO

Large plumes of dark smoke billowed from two separate incidents on the same street in Wilmington and Long Beach Saturday afternoon. The first fire was reported around 3:40 p.m. at 1149 East Anaheim Street in Long Beach. The Long Beach Fire Department said the smoke was coming from a 2nd-alarm structure fire. Massive plumes of […]
LONG BEACH, CA・6 HOURS AGO
KTLA

The Los Angeles Police Department is hoping to attract recruits with its new Housing for Hires program. The program will offer police recruits a $24,000 housing subsidy for 24 months, the LAPD posted in a video on its Facebook page. As of now, the program can support up to 200 new recruits but is hoping […]
LOS ANGELES, CA・2 DAYS AGO
KTLA

Coolio dead at 59: What we know

Rapper Coolio passed away on Sept. 28, shocking fans and loved ones across the globe with his sudden death. There are various reports as to what led up to his death, as he appeared to be in good health just days ago. What we know: The Grammy-award winning artist had been living in Las Vegas, […]
LOS ANGELES, CA・2 DAYS AGO
KTLA

KTLA 5’s Kaj Goldberg’s L.A. story begins in the San Fernando Valley. He lived in Tarzana when he was just a tiny tot, then he and his family moved to Encino, where he spent most of his childhood. Kaj has three sisters. They’re very close and talk quite frequently, but growing up, there were some […]
LOS ANGELES, CA・2 DAYS AGO
KTLA

The criminal organization behind a ransomware attack targeting the Los Angeles Unified School District has threatened to release illegally obtained data online, the district announced Friday. The hackers set a Monday deadline for officials to pay a ransom, the Los Angeles Times reported. The organization claims to have taken 500 gigabytes of data, but that […]
LOS ANGELES, CA・1 DAY AGO
KTLA

How rare are mountain lion attacks in California?

The search is on for a mountain lion believed to have attacked a child at Pico Canyon Park near Santa Clarita. The attack happened Monday when a 7-year-old boy was apparently bit on the rear by a mountain lion while the child was climbing some steps. The boy’s father was not far behind and was […]
CALIFORNIA STATE・3 DAYS AGO
KTLA

A 99-year-old woman fulfilled a lifelong dream by taking her first-ever flight lesson in Torrance on Wednesday. Despite her age, Irene Hasserjian still feels young and full of life. On a sunny Southern California day, Hasserjian arrived at the Torrance Municipal Airport, also known as Zamperini Field, ecstatic to earn her wings. “I’m very excited,” […]
TORRANCE, CA・3 DAYS AGO
KTLA

These are the scariest Halloween mazes in SoCal

Now that it’s officially October, it’s time to throw on your favorite cable knit sweater, grab a pumpkin spice latte and get ready to scream the night away. If you’re looking for ghostly haunts to scare the daylights out of you, Los Angeles has a scary amount of options to choose from. These events aren’t […]
LOS ANGELES, CA・1 DAY AGO