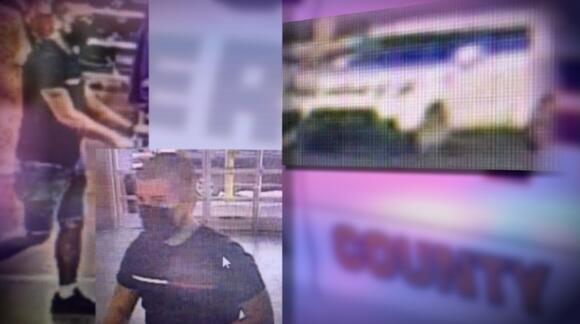 FREDERICKSBURG, Va. (WRIC) — A suspect is wanted by the Spotsylvania County Sheriff’s Office for fraudulent use of a credit card at a Walmart store. The card was reportedly stolen from a local Costco.

The incident occurred in Fredericksburg City on Friday, Aug. 12, at the local Walmart.

Police said the victim’s credit cards were stolen while in the Costco at 3102 Plank Road in Spotsylvania County that same day.

The suspect was pictured driving a white vehicle, according the the Spotsylvania County Sheriff’s Office.

Man killed in shooting in Fairfax

According to the Fairfax County Police Department, a man was dropped off at Inova Mount Vernon Hospital with a life-threatening gunshot wound to the upper body. The man was taken to Inova Fairfax Hospital in the Annandale area where he died from his injuries.
FAIRFAX COUNTY, VA・5 HOURS AGO
WRIC - ABC 8News

A Maryland man who works for the Fairfax County Department of Information and Technology has been placed on administrative leave after he turned himself in to police for allegedly embezzling more than 150 of the county's Wi-Fi routers.
FAIRFAX COUNTY, VA・18 HOURS AGO
WRIC - ABC 8News

Fredericksburg Police have arrested a man after he allegedly attempted to steal a car in a Five Guys parking lot.
FREDERICKSBURG, VA・2 DAYS AGO

The Henrico County Police Division is asking for the public's help in finding an elderly man with dementia who has been reported missing.
HENRICO COUNTY, VA・23 HOURS AGO
WRIC - ABC 8News

Police in Fairfax are looking for a group of men they believe are breaking into businesses across northern Virginia and stealing ATMs.
FAIRFAX COUNTY, VA・2 DAYS AGO
WRIC - ABC 8News

Police said the body was found lying on the road in the 5000 block of Vayo Avenue around 5 a.m.
CHESTERFIELD COUNTY, VA・2 DAYS AGO
WRIC - ABC 8News

A Chase ATM building on West Broad Street in Richmond was destroyed after a pickup truck crashed into it on Saturday afternoon.
RICHMOND, VA・17 HOURS AGO

Old Gun Road in Chesterfield County currently is shut down due to a fallen tree.
CHESTERFIELD COUNTY, VA・1 DAY AGO
WRIC - ABC 8News

The victim in an early morning shooting in Chesterfield on Friday has been identified, and an official cause of death has been determined.
CHESTERFIELD COUNTY, VA・1 DAY AGO
WRIC - ABC 8News

According to police, officers responded to the corner of Willomett Avenue and Crenshaw Avenue in central Henrico County at around 5 p.m. on Aug. 2 for a report of several gunshots heard in the area.
HENRICO COUNTY, VA・3 DAYS AGO
WRIC - ABC 8News

Chesterfield Police and fire crews are on scene of a fire on Midlothian turnpike, which began Saturday morning.
CHESTERFIELD COUNTY, VA・1 DAY AGO

According to the Richmond Department of Emergency Communications, the call for an apartment fire on the 600 block of Westover Hills Boulevard came in just after 3:30 a.m. on Sunday, Oct. 2.
RICHMOND, VA・8 HOURS AGO
WRIC - ABC 8News

Police tape was used to block off the corner of McDowell Road and Worthington Road. Several police vehicles were seen responding to the 900 block of McDowell Road.
RICHMOND, VA・2 DAYS AGO
WRIC - ABC 8News

Police said the teen was shot along McDowell Road. Officers got the call for a shooting at around 8:19 a.m. Friday.
RICHMOND, VA・1 DAY AGO
WRIC - ABC 8News

Lanes clear after crash on I-95 South in Richmond

According to 511Virginia, the crash took place at mile marker 75.9, between the Belvedere Street exit and I-95/I-64 interchange. The southbound left and center lanes are closed, as well as the left shoulder.
RICHMOND, VA・2 HOURS AGO
WRIC - ABC 8News

A Richmond man has been arrested for a deadly double stabbing that occurred Wednesday morning.
RICHMOND, VA・3 DAYS AGO
WRIC - ABC 8News

Virginia State Police is continuing to investigate an incident on Wednesday in which the operator of a motorcycle crashed in Henrico County as he was allegedly trying to get away from police.
HENRICO COUNTY, VA・3 DAYS AGO
WRIC - ABC 8News

The results of a new housing study are clear, and they paint a grim picture not only for aspiring homeowners. Richmond, Henrico and Chesterfield are increasingly split between wealthy enclaves and private investors, with little room left for working-class homeowners.
RICHMOND, VA・8 HOURS AGO
WRIC - ABC 8News

Henrico Police is currently looking for a man with Alzheimer's disease who was reported missing on Friday.
HENRICO COUNTY, VA・1 DAY AGO