Elgin prepares to make jump to Class 5A with experienced roster 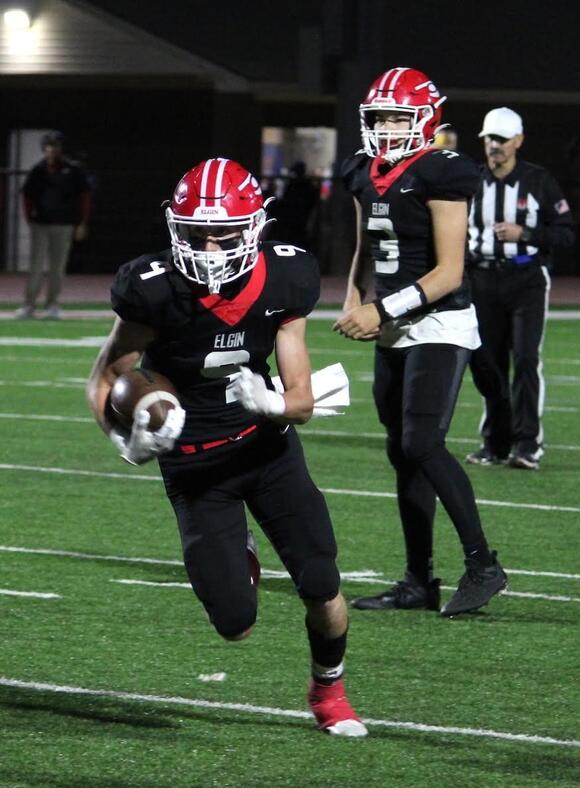 Over the next few weeks, SBLive Oklahoma will break down high school football teams from the four largest classifications in the state in anticipation of the upcoming 2022 season. Here's our look at the Elgin Owls.

Playoffs: Did not qualify

Big in both stature and personality, Ferguson is the emotional leader of the team after just two years of high school football experience. A punishing blocker who has only gotten stronger, he has been drawing the attention of college scouts and various media outlets alike, earning some All-State considerations as a sophomore.

Two seasons ago, he ran for 600-plus yards as a freshman, but because he played for a winless team, it largely went unnoticed. But when he ran for well over double that as a sophomore (despite missing time with injury), eyes were opened. Coach Wyatt says the speedy back has only gotten stronger in the offseason, which spells danger for opposing defenses.

A jack-of-all-trades who can catch, run and cover. He will get the ball on end-arounds, pop passes and out of the backfield as a traditional running back. His speed and shiftiness make him extremely dangerous.

He saw plenty of playing time as a freshman, and showed a combination of skill set and mindset that have set him up for a successful career. Son of former Owls coach Curtis Lorah, he’s been around the game of football (and the Elgin program) since he was a kid. Throws a pretty deep ball. The ability to read defenses is already sharp for someone his age, and the arm strength will only get better.

The top deep threat in the Owls’ arsenal, Adesola combines excellent speed with great route-running and terrific hands to make him one of the more underrated receivers in the state.

As a freshman, he made a huge impact, establishing himself as the next in a long line of outstanding linemen at Elgin. Can seal off the edge for big gains in the run game and will only grow into his frame.

Has great ball skills, especially for someone his size. Led the team in interceptions last season.

The Owls make the jump from 4A to 5A with a group of players who are young, but who have already played a ton of varsity snaps. With just 10 seniors gone from last year’s team, most of the squad returns. This is a program just two years removed from a winless season and who ended the 2021 season on a two-game win streak.

It’s a program and fan base that knows how it feels to get kicked around and can smell success around the corner. But that success won’t come easy, as Elgin joins a tough District 5A-1, featuring 2021 state semifinalist Lawton MacArthur, dangerous Noble and Ardmore squads and a Midwest City program that drops down from 6A-II.

Making the playoffs will not be easy. That being said, the offense appears built to make life difficult for just about any team on the Owls’ schedule. The big question is how will the defense hold up against some potent offenses?

"We have been young for the last two years and we are finally getting to be mostly juniors now. We are excited about the challenge." - Chalmer Wyatt

Weatherford, Clinton square off in renewal of the 'Custer County Conflict'

By Collin Wieder  Weatherford team photo courtesy of Steve Wheeler It’s Red River Rivalry week in Oklahoma, but along the I-40 corridor, this week features another big-time rivalry matchup - the Custer County Conflict between Clinton and Weatherford. The two nearby rivals will meet ...
WEATHERFORD, OK・10 HOURS AGO
Scorebook Live

Willis High School (Texas) junior D.J. Lagway is rated the nation's No. 1 dual-threat quarterback by ESPN and a five-star prospect on 247Sports.  The 6-foot-3, 225-pound signal-caller has already trimmed his list to a top 10 of Alabama, Arkansas, Baylor, Clemson, Florida, Georgia, LSU, ...
NORMAN, OK・10 HOURS AGO