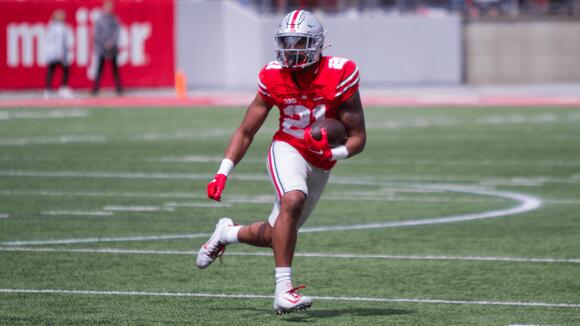 The second-year running back was set to have a role in the offense following a breakout spring game.

As first reported by Rivals ' Austin Ward and subsequently confirmed by BuckeyesNow , Ohio State redshirt freshman running back Evan Pryor is expected to miss the season with a "significant" knee injury suffered in Monday's practice.

The former four-star prospect from Cornelius (N.C.) William Amos Hough was third on the depth chart behind record-breaking starter TreVeyon Henderson and backup Miyan Williams , but was still set to have a role in the offense following a breakout spring game, when he rushed for 62 yards and one touchdown and caught four passes for 44 yards.

"Those guys all deserve to play," Ohio State running backs coach Tony Alford said on Aug. 5. "I've got to make sure they’re all ready to play because they all have shown the capacity and the ability to play winning football.

"If you show you can play winning ball, then we're going to find ways to put you on the field to help the football team to win ... You’d like to have an opportunity to have three or four guys that you can throw in and feel comfortable throwing them in the fire."

Pryor's injury leaves the Buckeyes with just three scholarship running backs in Henderson, Williams and freshman Dallan Hayden , as they also lost redshirt junior Marcus Crowley to a medical retirement back in May.

Ohio State could potentially turn to fifth-year senior walk-on wide receiver Xavier Johnson , who previously played running back, in hopes of adding some much-needed depth to the room. After all, he recently received praise from Alford for his willingness to do whatever is best for the team.

"'How fast can I get there, and tell me what you need me to do?'" Alford said of Williams' hypothetical response to another position change . "Then, he would come in extra and say, 'What have you put in that I don’t know?' … Let’s meet afterward, let’s meet early. It’s not even a question that he would do that. It’s a foregone conclusion."

The Buckeyes have three other wall-on running backs in sophomore Cayden Saunders and freshmen T.C. Caffey and Chase Brecht , but none have in-game experience at this point in their careers like Johnson.

Brown and Johnson got their first career starts in place of Cameron Brown and Denzel Burke, who missed the win over the Badgers due to injury.
COLUMBUS, OH・58 MINUTES AGO
AllSooners

Benson earned the honor after running through the Eagles all night.
TALLAHASSEE, FL・21 MINUTES AGO

Smith-Njigba missed his second game in three weeks, but the Buckeyes still rolled over Wisconsin on Saturday night.
COLUMBUS, OH・2 HOURS AGO
BuckeyesNow

There are three games between ranked opponents this weekend, while five others hit the road.
COLLEGE SPORTS・1 DAY AGO
BuckeyesNow

The redshirt junior has embraced being a tight end and placed emphasis on his route-running this summer.
COLUMBUS, OH・2 DAYS AGO
BuckeyesNow

"Let’s go make this the loudest it’s ever been.”
COLUMBUS, OH・15 HOURS AGO

The Cougars cruised in the second half on their way to a 38-24 victory
PROVO, UT・22 MINUTES AGO
BuckeyesNow

Who Steps Up For Ohio State Against Wisconsin In Jaxon Smith-Njigba's Absence?

The Buckeyes' top wide receiver ruled out for Saturday's Big Ten opener against the Badgers.
COLUMBUS, OH・10 HOURS AGO

Eichenberg and the Buckeyes' linebackers will be challenged by Badgers running back Braelon Allen.
COLUMBUS, OH・2 DAYS AGO
BuckeyesNow

The Buckeyes and Badgers will meet under the lights where Ohio State has completely dominated Wisconsin the last decade.
COLUMBUS, OH・1 DAY AGO
BuckeyesNow

Here's what we are expecting Saturday up in the Big House when Michigan and Maryland meet on the football field.
ANN ARBOR, MI・1 DAY AGO
BuckeyesNow

Day said the Badgers "epitomize the Big Ten" because they're physical, well-coached and want to establish the run.
COLUMBUS, OH・2 DAYS AGO
BuckeyesNow

Game Preview: Ohio State’s Toughness To Be Tested Against Wisconsin

The Buckeyes have won eight straight against the Badgers, including three victories in the Big Ten Championship Game.
COLUMBUS, OH・1 DAY AGO
CBS Baltimore

BALTIMORE -- The Baltimore Ravens have promoted wide receiver Raleigh Webb and linebacker Brandon Copeland from the team's practice squad.The Ravens made the announcement Saturday evening on the team's Twitter account.Copeland, 31, is a Carroll County native. He signed with the Raven's practice squad a few days ago.Head coach John Harbaugh said during a press conference on Sept. 21 that Copeland was "one who kind of sort of got away."Copeland spent last season with the Atlanta Falcons, playing 16 games, three of them starts, and recording 39 combined tackles, two quarterback hits and four tackles for loss.In his six-year career, Copeland played for the Detroit Lions, New York Jets and New England Patriots before joining Atlanta in 2021.A native of Sykesville, Copeland starred at the Gilman School before going on to play with the Penn Quakers at the college level.The Ravens signed Copeland as an undrafted free agent in 2013 and placed him on the practice squad coming out of training camp, but he was released in September and caught on with the Tennessee Titans.
BALTIMORE, MD・13 MINUTES AGO
BuckeyesNow

Game Prediction: No. 11 Tennessee Volunteers vs. No. 20 Florida Gators

Florida has had a brutal schedule so far, while Tennessee has looked as good as it has in a long time. But can they finally get over the pan-handle-sized hump against the Gators?
KNOXVILLE, TN・1 DAY AGO