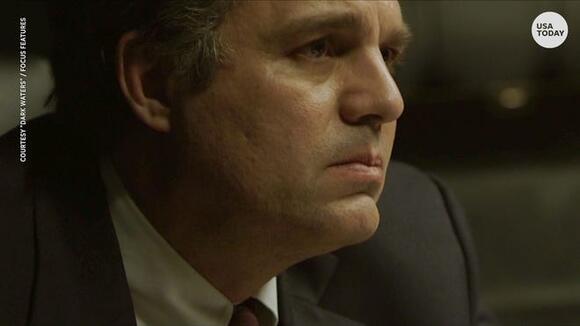 I love popcorn. I don’t love breathing dangerous chemicals that my body will never be able to break down.

The first time I met Rob Bilott, he told me that’s what I’m doing every time I eat my favorite buttery snack. Bilott is an environmental lawyer who was the subject of a Hollywood movie starring Mark Ruffalo.

The trailer for the film, which documented Bilott’s fight against chemical giant DuPont, looked like a horror movie. I met with him to talk about chemicals in our drinking water that can cause liver damage, thyroid disease, decreased fertility, high cholesterol, obesity, hormone suppression and cancer.

All these products use human-made chemicals that our bodies can’t break down. And that means nearly all Americans, including newborn babies, have some level of these so-called forever chemicals in our blood.

In the past, I’ve walked through smelly brown water in hip-high waders to do this. Last month, I stood on top of millions of tons of trash at Rumpke’s landfill in Colerain Township.

What should I do next? Help me, so I can help you. While I’ve written about some of these topics before, I know I have a lot to learn. Send me an email if you have a story idea, or if you’d like to get coffee sometime: kbierygolick@enquirer.com. I like coffee almost as much as I like popcorn.

And while you’re here, below are four environmental stories I’ll be paying attention to. Please let me know what else I should look into.

There’s more trash in Greater Cincinnati than ever before. A Rumpke spokeswoman says trash in the region’s landfills continues to increase. In 2014, Rumpke collected about 2.1 million tons of trash. Last year, the company collected almost 3.5 million tons.

(The company is trying to expand its operation in Whitewater Township, which has drawn criticism from residents and an Ohio EPA review.)

At its recycling center in St. Bernard, Rumpke spokeswoman Molly Yeager Broadwater says about 13-15% of the materials they receive cannot be recycled and end up in landfills. The recycling facility processes more than 60 tons of materials every hour.

At a May meeting in Bond Hill to discuss climate change, Cincinnati City Councilman Mark Jeffreys said city officials spend $2.5 million a year cleaning up illegal dumping and littering. It’s a problem that affects the city’s most underserved communities.

"Typically, people are not from the neighborhood where they dump," Jonathan Addee, director of Keep Cincinnati Beautiful, told The Enquirer last year. "It happens in lower-income neighborhoods. No one is illegally dumping in Hyde Park."

'A dumping ground.' Why is it so hard to clean up Cincinnati?

Adee said the punishment for these acts hasn’t worked. At the meeting, he said officials have discussed incentivizing lawful behavior instead of just punishing illegal dumping.

The death of coal

The William H. Zimmer Power Station has closed. The coal-burning plant in Clermont County is at least the sixth such facility to close since 2013. For years, these plants along the Ohio River were a defining characteristic of the region.

Now, they sit mostly unused in various stages of cleanup.

Zimmer generating station: Tragedy on the Ohio River, and the power plant next door

More plant closures are planned, and they seem to be happening sooner than expected. Zimmer closed five years earlier than initially announced. Why? Lower natural gas prices have made coal less appealing. In addition, the cost of upgrading these plants to comply with pollution laws has led companies to move on.

Will these closures leave the region more vulnerable to blackouts and power issues? Will the closures help the environment? Will local communities and schools be able to handle the lost tax revenue?

The answers are complicated. New Richmond Schools have lost millions of dollars in tax revenue since the Beckjord Power Plant closed in 2014. WCPO-T reported the district closed an elementary school, cut staff and sold buildings to dig out of a $4 million hole after Duke Energy closed the plant.

The district will lose more with Zimmer’s closure.

Residents near Beckjord, a few miles from Zimmer, are suing the company responsible for the maintenance of the site. Duke Energy sold it in 2018. But even as the plant ceased operations, residents say the cleanup has caused public health issues with dust and debris. The lawsuit alleges coal ash, which contains contaminants such as mercury and arsenic, is being moved to unlined ponds which can pollute air and drinking water.

As for big-picture questions about power generation in the region, this is from Inside Climate News:

The national average electricity price for households is on track to rise 4 percent this year compared to 2021, which would be the largest percentage increase since 2008, the Energy Information Administration said. This follows recent warnings from grid operators serving California and the Midwest that they may not have enough power plants available this summer to meet customer needs at times of high demand.

The headline for that story says, “Coming this Summer: Spiking Electricity Bills Plus Blackouts.”

This term is used a lot in discussions about climate change, but you might not know it. Essentially, environmental justice means people most affected by pollution and changes in our environment often live in minority communities and have lower incomes.

Segregated Cincinnati: Why 1 in 3 people live in predominantly Black or white neighborhoods

Groundwork Ohio River Valley and other local officials have been studying environmental disparities in Cincinnati neighborhoods and released findings earlier this year. They discovered Lower Price Hill barely has any trees, making it hotter than much of the city. When measuring surface temperatures, there’s a 10-degree difference in some neighborhoods across the city.

That can affect health and quality of life.

Cincinnati may be split pretty evenly between white and minority residents, but almost 1 in 3 city residents live predominantly Black or white neighborhoods. The segregated nature of Cincinnati leads to differences in the environmental dangers residents face.

Lower Price Hill has 6% tree coverage, one of the lowest in the city. The neighborhood also is among the highest for cancer risk in Cincinnati. Almost 72% of Lower Price Hill residents live in poverty.

Researchers also found Roselawn and Bond Hill, two of the city neighborhoods with the highest percentage of Black residents, face extreme exposure to environmental hazards. After storms, both are predicted to have above-average levels of stormwater runoff in sewer systems.

These are issues leaders want to address in the city’s Green Cincinnati Plan, which is in the process of being developed and updated.

How do I protect my air?

In 2020, the Environmental Protection Agency removed an air pollution nuisance rule from Ohio law. The rule allowed ordinary citizens to challenge polluters and other large companies in federal court.

EPA officials made the decision to remove it after a lawyer representing a company that had been sued using the rule complained. Ohio officials backed the move in court filings supporting the EPA.

Environmental activists are challenging the removal because they say it strips residents of power and will lead to more public health threats from pollution. The rule had been part of Ohio’s plan for complying with air quality standards since 1974.

EPA officials said in court filings the rule should never have been implemented, and state officials don't rely on it to maintain healthy air quality. Officials also said citizen lawsuits could still be brought to state court.

“People think if something is really wrong, the EPA will protect them,” said Justin Newman, an attorney involved in a lawsuit about the rule. “That’s just not the case.”

The case challenging the decision is still being litigated.