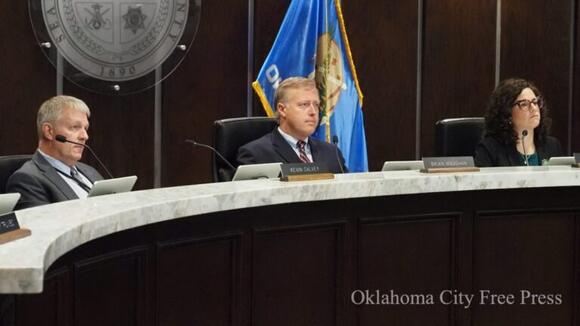 OKLAHOMA CITY ( Free Press ) — During the regular meeting of the Oklahoma County Board of County Commissioners (BoCC) a slate of projects was approved to receive American Rescue Plan Act (ARPA) funds for a total of over $23 million of the County’s projected $154 million allotment from the Federal Government.

The Commissioners also moved the new jail facility project forward ever so slightly by hiring consultants and counsel for issuance of the bonds approved by voters on June 28 of this year.

Also, some residents in Eastern Oklahoma County might be in for some frustration as several speed limits are reduced for safety due to road conditions.

A slate of 16 projects determined to be appropriate spending for ARPA funds were approved unanimously by the Board.

The projects, totalling over $23,615,912, have been discussed extensively in private and in public meetings of the Policy and Governance Committee of the BoCC. The committee is composed of the Chief Deputies of each of the three County Commissioners.

The allocations included no real surprises, though some were not well explained or, indeed, explained at all.

During discussion of the various projects, District 1 Commissioner Carrie Blumert explained that when beginning the process for allocating ARPA money, the County decided to first look inward at what infrastructural needs were highest priority. That is where many of the projects approved came from.

Capital improvements to the Courthouse Annex, the Juvenile Justice Center, and the Detention Center have all been discussed in various venues for the last many months.

Less transparent is the allocation of $11,758,776 to the Sheriff’s office under three listed projects.

The first two allocations, totaling $3,150,458 are listed as reimbursement for the Sheriff’s special revenue funds for two distinct periods of time since the onset of COVID-19, a pandemic disease still killing people in Oklahoma and abroad on a daily basis.

An additional $8,608,318 was allocated for the Sheriff’s office for the nondescript purpose of “Comprehensive Community Violence Intervention.”

During Sheriff Tommie Johnson, III’s remarks to the Board, the Sheriff made the outlandish claim that this money will help the department do as President Biden suggested, which is to reinvest in Law Enforcement after the “damage done by the defund law enforcement movement.”

No law enforcement agencies in Oklahoma County, nor indeed the nation, has been defunded.

In fact, budgets for law enforcement in central Oklahoma have seen significant increases each year for the past many years, including all budgets since the murder of George Floyd at the hand of the Minneapolis Police Department in 2020.

Floyd’s murder sparked a movement to “defund the police,” a phrase used by activists and advocates to encourage municipalities to divest from punishment and invest in community solutions to poverty and other interventions to prevent crime at the root causes.

Since the murder of Floyd, law enforcement across the land have made claims that crime is on the rise. This statistic seems an indictment of the efficacy of law enforcement, agencies that, again, have seen budgetary increases each year.

Johnson claimed that this money would help invest in “mental health.” Activists contend that mental health care and mental health crisis response should not be the purview of law enforcement, but should be handled by professionals with training specific to people experiencing mental illness or health crises.

The Sheriff did not divulge any specific plans for the large amount of money.

On Monday the Council urged forward the slow progress of building a new detention facility by hiring consultants and legal counsel for advising on the process of issuing the new bonds that Oklahoma County approved by vote on June 28th of this year.

Many of the usual firms were approved for professional service agreements on Monday. Those firms were:

Now that those firms and consultants have been hired, the county may move forward on the issuance of the recently approved bonds.

The County will also invite Oklahoma Municipal Staff to participate in conversations aimed at partnering with the City as a project manager on the construction of the facility, which will be mostly used to house prisoners supplied by the Oklahoma City Police Department.

The Commissioners agreed unanimously to lower speed limits in the Harrah area of rural Oklahoma County.

Harrah Road from Memorial Road to Britton Road will see a reduction in speed limits from 55 to 45 miles per hour.

The speed reductions all apply to roads inherited by District 1 after the redistricting of Oklahoma County following the 2020 census.

D1 Commissioner Carrie Blumert pointed to road conditions and safety as the reason for the reductions. The 55mph speed limits were requested by frequent users of the roads, but a fatal accident last year suggested to engineers that the speed limits should be reconsidered.

These roads include Harrah Public Schools bus routes. The school district has embraced the proposed changes.

The Board voted unanimously to reduce each of those speed zones.

Who will be on the November 8 ballot in Cleveland County?

There has been a surge in the number of homes used exclusively for short-term rentals, or “homeshares,” affecting housing availability. The post OKC housing availability affected by Airbnb, other homeshares biz appeared first on Oklahoma City Free Press.
OKLAHOMA CITY, OK・12 DAYS AGO