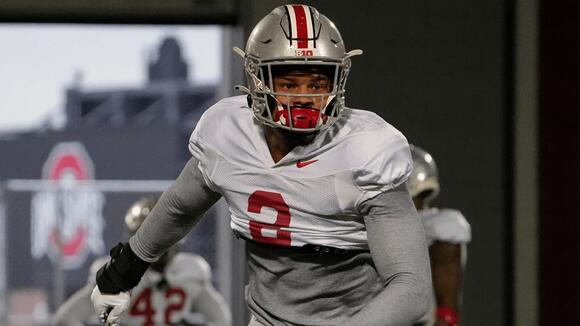 The Buckeyes appear in the preseason AP poll for a record-breaking 34th straight year.

Just like the USA Today Sports AFCA Coaches Poll released last week , Ohio State will begin the 2022 season as the second-ranked team in the Associated Press top 25 poll, which was unveiled on Monday afternoon.

Ohio State’s 69 total appearances are also the most of any team in the country, having been unranked just four times since the AP poll was introduced ahead of the 1950 season (1966-67, 1979 and 1988). The Buckeyes have notably been ranked in the top five on 13 occasions, including nine of the last 10 years.

As for this year’s poll, Ohio State received six first-place votes, trailing only No. 1 Alabama with 54. Third-ranked Georgia received three, while Clemson and Notre Dame round out the top five.

In addition to the Fighting Irish, other ranked teams on the Buckeyes’ schedule include No. 8 Michigan, No. 15 Michigan State and No. 18 Wisconsin. Iowa and Penn State are unranked, also received votes in the poll.

That said, the full Associated Press Top 25 poll can be found below, with first-place votes in parenthesis:

Ohio State Stays At No. 3 In AP Top 25 Poll Following Win Over Rutgers

The Buckeyes are one of just three Big Ten teams ranked in this week's poll, joining Michigan and Penn State.
COLUMBUS, OH・1 DAY AGO
BuckeyesNow

Ohio State Names Four Players Of The Game Vs. Rutgers

Miyan Williams, Zach Harrison, Steele Chambers and Jesse Mirco were honored for their individual performances in the victory over the Scarlet Knights.
COLUMBUS, OH・19 HOURS AGO
BuckeyesNow

Williams is the fourth Buckeye in as many weeks to earn either the offensive or defensive honor.
COLUMBUS, OH・3 HOURS AGO
BuckeyesNow

The Buckeyes blew out Rutgers in impressive fashion, thanks largely to the way they ran the football without their top tailback.
COLUMBUS, OH・1 DAY AGO
BuckeyesNow

Here's what we expect when the Buckeyes and Scarlet Knights meet on Saturday afternoon in Columbus.
COLUMBUS, OH・2 DAYS AGO

"We were both protecting our players. That’s what good coaches do."
COLUMBUS, OH・1 DAY AGO
BuckeyesNow

No TreVeyon Henderson, No Problem For Buckeyes

Ohio State's top running back hasn't played against Rutgers, but the Buckeyes have stampeded the Scarlet Knights anyways.
COLUMBUS, OH・1 DAY AGO
BuckeyesNow

Watch Schiano run all the way across the field and get in Ryan Day's face.
COLUMBUS, OH・1 DAY AGO

The Buckeyes will be without a total of 14 players against the Scarlet Knights, including two starters.
COLUMBUS, OH・2 DAYS AGO