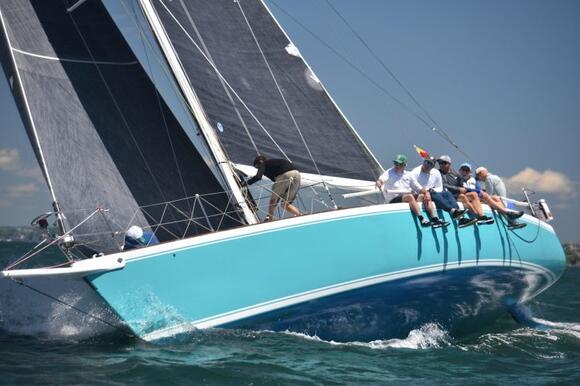 When the Ida Lewis Distance Race starts this Friday (August 19) at 11 a.m., spectators on land and water will bear witness to one of New England’s most unique sailing adventures, observing its 17th edition. Forty-one teams, split into classes for ORC, PHRF, PHRF Double Handed, and PHRF Cruising Spinnaker, will head out to sea, past Fort Adams and Castle Hill to take on one of four overnight round-trip courses (“The Montauk”, “The Block Island”, “The Point Judith”, “The Buzzards Bay Tower”) that range in length from 112 to 169 nautical miles. The course will have been chosen in advance by the Ida Lewis Yacht Club Race Committee when it is clear what the wind and weather will be doing over the coming 18 -24 hours.

“The Ida Lewis Distance Race is a fun overnight sprint where strategy and tactics are important,” said Sheila McCurdy (Middletown, R.I.), skipper of the McCurdy & Rhodes 38 Selkie, which will sail in PHRF and was designed and built by her father. “Our crew is a combination of three very good offshore sailors and three sailors who want more experience on big boats. I love that offshore sailing is an opportunity to mix generations; our crew has an age range from one in her teens to one in her 60s.”

Selkie was signed up last year for this race, which had to be cancelled due to the approach of Hurricane Henri, and more recently, the team had to retire from the Newport to Bermuda Race because of an injury. “Maybe by sailing in the Ida Lewis Distance Race we can get a fleeting sense of about one-fifth of a Bermuda Race,” said McCurdy.

For Ida Lewis Yacht Club veteran James Phyfe (Cranston, R.I.), who has entered his J/44 Digger, this is the first year that he is participating in the race with this boat. “We were registered last year with many of the same crew and were headed down the Bay when it was cancelled,” said Phyfe, explaining that his crew is comprised mostly of family and juniors. His niece, Brooke (15), is bringing five friends from her junior racing program at New Bedford Yacht Club.

“With his group we did the Whalers Race (in New Bedford, Mass.) this spring, and we have our eye on the 2024 Newport to Bermuda Race,” said Phyfe. “I really enjoy sailing with these kids because they are very enthusiastic, and I’m hoping this is a steppingstone for some other future offshore sailing for them.”

Another team with youth on its side is Mudratz Racing’s Spitfire, a Corel 45 out of Stonington, Conn. which has officially registered as a Collegiate Challenge entry. “We have the same crew lined up that recently completed the Bermuda Race,” said Mudratz Offshore Coordinator Julia Cronin, explaining that two of the crew are 15-year-old high school students and two have just graduated from college where they were on the sailing team. Three more are current college students (UC Davis, St. Mary’s College, University of Rhode Island) and sail for their respective college teams as well.

“In our program, we don’t have a designated skipper; all the kids do all the jobs on board,” said Cronin. “We believe this is the best way for everyone to become well-rounded sailors.”

Considered to have “something for everyone,” the Ida Lewis Distance Race has attracted a large group of double handed sailors, including Ken Read (Portsmouth, R.I.) and new sailing partner Sara Stone, who will sail the Jeanneau Sunfast 3300 Alchemist. With Read at the helm, Alchemist won this race in 2020 when there were three entries in the PHRF Double Handed class. For 2022, there are 11 entries to date.

“It looks like the Ida Lewis Distance Race won’t disappoint this year,” said Read. “Keep the tropical storms away, of course, but it looks like a great class of double handed racers. I’m really looking forward to getting out there to enjoy a form of racing that I have become really fond of.”

Another doublehanded entrant, Steve Clarke (Tiverton, R.I.), will sail his J/99 New Wave, which he has owned for a little over a year now. “She’s designed for short-handed distance racing and I’m excited to try her out in the Ida Lewis Distance Race,” said Clarke, who will sail with friend Chris Bowley, an accomplished bow man and all-around sailor. “I’ve sailed the Ida Lewis Distance Race twice before on my previous boat with full crew. It’s a great race format that really challenges your skills.”

The Ida Lewis Distance Race is enjoyed by veteran offshore sailors as well as those trying overnight sailing for the first time. It begins off Fort Adams and ends just inside Newport Harbor where Ida Lewis volunteers can sight the finish line from their clubhouse on Lime Rock and greet each team on the water with a congratulatory bottle of Prosecco.

Catching the fleet’s return to Newport may be somewhat more difficult to witness firsthand, since larger boats typically finish early Saturday morning, sometimes in the dark, and the smaller boats finish at random intervals throughout the morning and afternoon. Fans may, however, follow their favorite teams on the YB tracker, which will be linked and activated on the Ida Lewis Distance Race website once the race has started.

The Biden administration has awarded Rhode Island $82.5 million to to upgrade the iconic Pell Bridge that connects Newport and Jamestown. Planned improvements to the deck, suspension system, and towers will extend the life of New England’s longest suspension bridge by an additional 50 to 75 years. The project...
NEWPORT, RI・10 DAYS AGO