Even by the serene standards of Los Cerritos, the home at 4255 Chestnut Ave. is extraordinarily peaceful. Bracketed by a brace of massive sycamores and fronted by a comparatively diminutive magnolia tree, the home is on a huge lot of a bit more than a half-acre, and its sprawling verdant backyard is as close to Elysian as I’ve seen in my years nosing around Long Beach properties.

A large statue of the Virgin Mary stands in one corner of the yard that’s dotted with dozens of flowering bushes, roses, a crape myrtle, a rosemary bush beneath an arbor, a small orchard of citrus trees, all shaded at least partially by a towering century-old pine.

Along a narrow outdoor walkway with bench seating is a long, maybe 30-foot stacked-stone wall with water gently trickling down its face. Overall, you can pick a place to relax or meditate nearly anywhere on the property and perhaps attempt to read a book before dozing off. 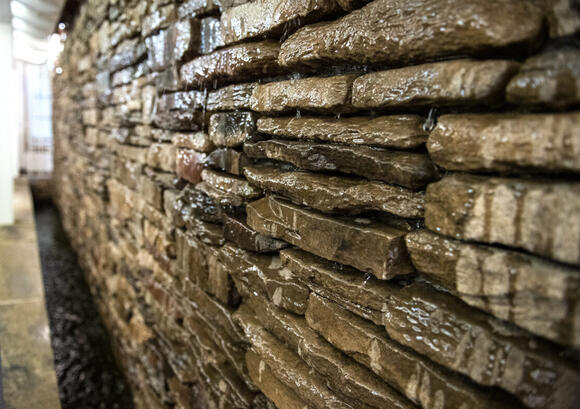 It wasn’t always this quiet in the 4,800-square-foot house. It was built in 1949 for Dr. Carlyle Ahrens and his wife. Its architect, Hollywood art director Henry Larrecq, designed it to be built around an electric organ. That sounds (and is) weird, but an article about the house in the Press-Telegram’s Southland section explained, after a fashion, that year:

“The tone cabinet was built into a hollow partition between the entry and sunroom and the organ was in the corner of the sunroom, some distance away from the tone cabinet. The sound is enhanced by reflections against the walls before it reaches the listener.”

You’re curious to hear it, but, alas, every trace of the organ and its connection to the walls of the house have long since disappeared.

But it’s fair to say that, aesthetically, the home has not suffered for its absence.

In the years since it was built, other owners have added bedrooms and other rooms to the house as well as upgrading the original parts.

The floors throughout most of the house are lustrous three-quarter-inch cherrywood. If the generous use of windows in the house don’t introduce enough of the outdoors to the home’s interior, there’s a lot more to pull some of the gathering rooms into the backyard, most notably an expansive “flex room,” meaning use your imagination, that runs for a long way along the back of the house with floor-to-ceiling, wall-to-wall windows that fold back and recede to allow complete access to the yard. The previous owners used it as a game room, with both table tennis and a pool table. While the house already has an inviting sunroom, one would still be tempted to use the flex room as another space to bring in comfortable chairs and sofas to just sit and enjoy the view, or perhaps turn it into an entertainment space. It’s flex; do what you want. 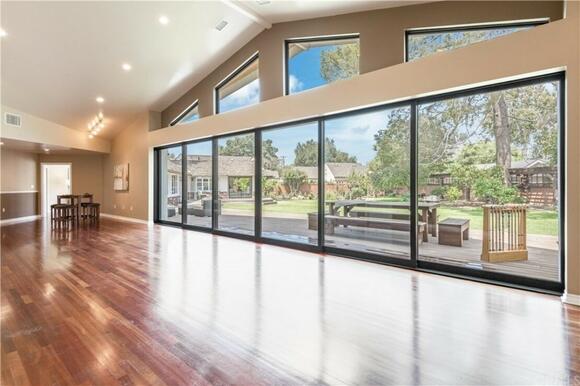 The home’s “flex room” features windows that open up to the backyard. Photo courtesy of Carolyn Faber and Kristi Vento.

Listed by the premier mother-daughter team of Carolyn Faber and Kristi Vento at $3.388 million, it enters the list of the top 10 most expensive homes listed in Long Beach, just behind the Alison White restoration home at 4131 Cedar Ave., as Los Cerritos tries to keep pace with the more expensive homes in and around Naples. The two neighborhoods have both been leaders in expensive home sales, and there’s much to recommend the quiet and stately Virginia Country Club neighborhoods over the more vibrant and active waterfront areas, with one of the key advantages being the much greater sized lots in Los Cerritos.

This home on Chestnut typifies the best of Los Cerritos, and while it owes much of its charm to its grounds and the house’s accessibility to those grounds, the house itself has plenty of outstanding features, from its kitchen with a center prep island and extra sink and a beautiful Lacanche range and Viking oven, to its two en-suite bathrooms and walk-in closets, to its glass-enclosed office and formal dining and living rooms. 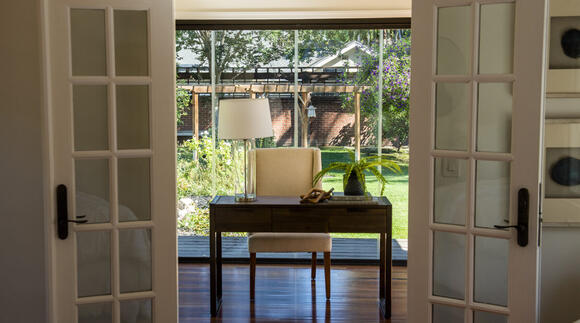 The office where three sides of the room have open doors or windows. Photo by Thomas R. Cordova.

Both Faber and Vento, who have sold other prestigious properties in the area, agree that more people are beginning to prefer the peace of Los Cerritos over the more active and vibrant Naples area for a variety of reasons, including the golf and gatherings at the nearby country club, but the main draw of the area, which is apparent even as you drive or walk through the neighborhoods, is the space and the silence. 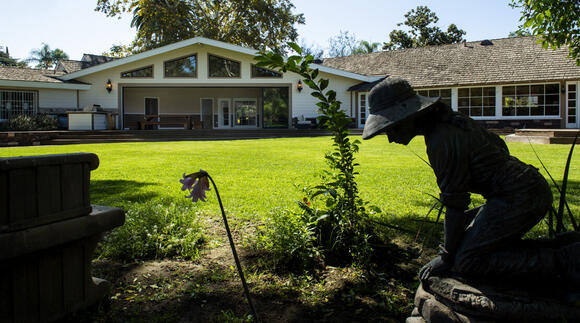 A big backyard at the home on Chestnut Avenue in Los Cerritos. Photo by Thomas R. Cordova.

Plus: movies, pumpkins and fall shopping. The post Things to do in Long Beach this weekend including… art and architecture appeared first on Long Beach Post.
LONG BEACH, CA・10 HOURS AGO
Long Beach Post

Downtown transformation is underway as residents, businesses rebound from pandemic

Downtown Long Beach has undergone major changes recently, mostly due to the lack of tourists and office workers in the area during the worst of the pandemic. But local officials are hopeful that a renaissance is around the corner. The post Downtown transformation is underway as residents, businesses rebound from pandemic appeared first on Long Beach Post.
LONG BEACH, CA・1 DAY AGO
Long Beach Post

A local urban design studio is working with a pair of nonprofits to keep the park active and full of welcoming events for everyone. The post These groups are turning Lincoln Park into a hub for Downtown entertainment appeared first on Long Beach Post.
LONG BEACH, CA・10 HOURS AGO

Prosecutors said a cellphone dropped at the scene of the crime in Beverly Hills and one robber's brag posts on Instagram helped them track down the suspects. The post 3 Long Beach men charged with stealing $2.6 million in jewelry during smash-and-grab robbery appeared first on Long Beach Post.
BEVERLY HILLS, CA・6 HOURS AGO
Long Beach Post

Extra Frames: The photos we didn’t publish in September

Extra Frames is a monthly compilation of images captured by Long Beach Post photographers that didn't make it into a story but are too good to languish unpublished. The post Extra Frames: The photos we didn’t publish in September appeared first on Long Beach Post.
LONG BEACH, CA・4 DAYS AGO
Long Beach Post

Two residents challenged the permit to sell alcohol, saying it was too close to a playground and the ocean, but the City Council voted 7-1 to deny the appeal. The post City will let Junipero Beach concession stand sell alcohol after council blocks appeal appeared first on Long Beach Post.
LONG BEACH, CA・12 HOURS AGO
Long Beach Post

The Coast Guard said they were alerted to the missing diver around 2:10 a.m. Monday. The post Search underway for missing diver near Catalina Island appeared first on Long Beach Post.
LONG BEACH, CA・2 DAYS AGO

A female bystander was hospitalized early Monday morning after being struck by stray gunfire near the Pike in Downtown Long Beach, police said. Hyperlocal news is an essential force in our democracy, but it costs money to keep an organization like this one alive, and we can’t rely on advertiser support alone. That’s why we’re asking readers like you to support our independent, fact-based journalism. We know you like it—that’s why you’re here. Help us keep hyperlocal news alive in Long Beach.
LONG BEACH, CA・2 DAYS AGO
Long Beach Post

California will soon eliminate parking mandates near transit; here’s how that will impact Long Beach

The legislation will remove a significant hurdle in creating urban housing, and seeks to decrease the need for cars in traffic-dense cities like Long Beach. The post California will soon eliminate parking mandates near transit; here’s how that will impact Long Beach appeared first on Long Beach Post.
LONG BEACH, CA・3 DAYS AGO
Long Beach Post

A pedestrian was hit and killed by a vehicle on an off-ramp for the Terminal Island Freeway last night, according to the California Highway Patrol. Hyperlocal news is an essential force in our democracy, but it costs money to keep an organization like this one alive, and we can’t rely on advertiser support alone. That’s why we’re asking readers like you to support our independent, fact-based journalism. We know you like it—that’s why you’re here. Help us keep hyperlocal news alive in Long Beach.
LONG BEACH, CA・13 HOURS AGO

Tacos Lionydas, which usually operates on the corner of Clark and Atherton, had their food and supplies thrown away and their taco cart impounded on Wednesday. The post Tacos Lionydas, a popular East Long Beach taco stand, shut down by health department appeared first on Long Beach Post.
LONG BEACH, CA・6 DAYS AGO
Long Beach Post

With a more spacious home, Heart of Ida’s programs can continue to grow, and the organization can connect with more older adults in need. The post Heart of Ida expands space in Long Beach Senior Center appeared first on Long Beach Post.
LONG BEACH, CA・6 DAYS AGO
Long Beach Post

With the abrupt end of an emergency housing program at a Downtown motel, some of the city’s most vulnerable residents face few options for a permanent home. The post High anxiety at the Days Inn as homeless residents face ‘terrifying’ uncertainties appeared first on Long Beach Post.
LONG BEACH, CA・6 DAYS AGO
Long Beach Post

If you want to help save the lives of shelter cats, put on your fanciest slyboots and come to the CatPAWS Chic Chat Soiree gala next weekend! The post Gala fundraiser helps to make more fairytale endings for rescue cats appeared first on Long Beach Post.
LONG BEACH, CA・5 DAYS AGO
Long Beach Post

Representatives of the Long Beach institutions hope to use the money to improve early exposure to the health care, engineering and computing career fields and to further develop access to education and career pathways for students of color. The post Long Beach region receives about $2.8M to improve education equity appeared first on Long Beach Post.
LONG BEACH, CA・4 DAYS AGO
Long Beach Post