Now more than ever, tough and fair journalism is important. The Tennessee Lookout is your watchdog, telling the stories of politics and policy that affect the people of the Volunteer State. Our investigative reporters and journalists explain what’s happening, why it’s happening, and who it helps or hurts. We expose the relationships between politics, people and policy and we hold the powerful accountable. You can count on us for hard-hitting stories and incisive commentary on health care, hospital closures, mental health and addiction treatment, education, criminal justice reform and environmental issues. We are a nonprofit and all of our content is free for sharing. Tennessee Lookout is part of States Newsroom, a national 501(c)(3) nonprofit supported by grants and a coalition of donors and readers. Tennessee Lookout retains editorial independence. 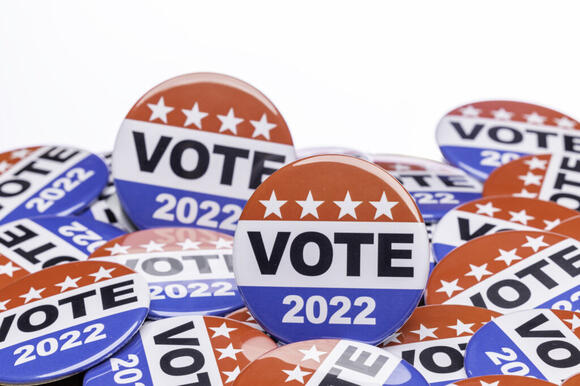 Tennessee has historically been a low voter turnout state and the Aug. 4  primary elections proved no different. Only 17% of registered voters cast a ballot in the state and federal primary elections and the county-level general elections. Even for Tennessee, such a low level of turnout for a midterm primary is unusual.

However, the turnout decline from the last midterm primary was not equal across the state. Some places, like Shelby County, saw a dip of less than 20% while a few counties in Upper East Tennessee had a decline closer to 80%. 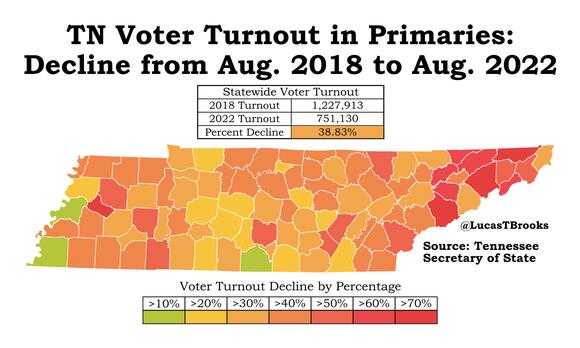 Some trends appear. Turnout declined the most in Upper East Tennessee. Many parts of rural West Tennessee and the Upper Cumberland Plateau steeply declined as well. Part is likely due to a lack of competitive statewide primaries that interest voters enough to encourage turnout. Gov. Bill Lee faced no opposition in the Republican primary and the only place where the Democratic gubernatorial primary appeared to spur turnout was in Shelby County since two of the three candidates were from Memphis.

The competitive Republican primary for the 5th Congressional district may have helped turnout in rural and suburban counties including  Marshall and Maury.  But the race for the 5th apparently created no such boost in the Davidson County portion of the district, in which turnout declined higher than the statewide average. 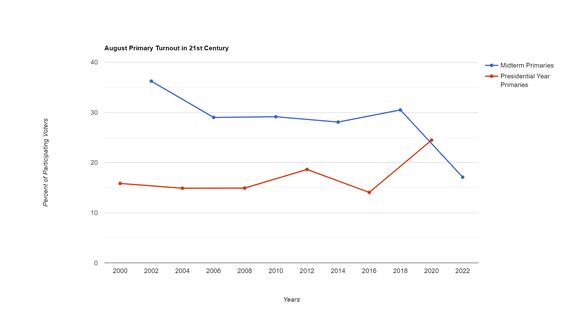 This year’s midterm primary was the first in the 21st century to have fewer than 1 million votes cast, even though the state has added more than 1 million voters to its rolls since 2002. The low turnout rate of 17% is more in line with the expected turnout for a primary during a presidential election year. For the first time, fewer votes were cast in the midterm primary than in the presidential election year primary that preceded it. It bears mentioning that the 2020 August primaries featured two competitive senate primaries and an unusually engaging national political environment.

Tennessee’s struggles with voter turnout are not unique. While 2020 and 2018 did see higher than normal turnout rates nationwide, such voter turnout was spurred by an incredibly controversial and divisive presidential administration. Perhaps the results for the 2022 August primaries is merely an aberration, but it is more likely that voter enthusiasm is returning to its previous levels.

It's come to the point who cares. The Governor Lee don't want to raise min wage to 15 to 20 hr so people can afford to live. He works for big businesses. Who cares! I don't!

Educators are concerned about the quality and quantity of applicants entering the field of education.  Talented adults who want to teach find there are too many barriers to entry into the field as they attempt to address the onerous licensure system. Teachers themselves have often been catalysts for innovative solutions to the many challenges facing […] The post Building a better pipeline by preparing educators appeared first on Tennessee Lookout.
TENNESSEE STATE・9 HOURS AGO
Tennessee Lookout

The House chairman of the Joint Government Operations Subcommittee on Tuesday criticized the authority of a state commission to overrule local school boards that turn down charter school applications. Rep. Kent Calfee, a Kingston Republican who is stepping down from the Legislature this fall, spoke out against the ability of the Tennessee Public Charter School […] The post House chairman knocks charter commission override authority appeared first on Tennessee Lookout.
TENNESSEE STATE・1 DAY AGO

Lawmakers blasted the Department of Correction Monday for making a weak response to a 2020 audit, with one legislator questioning whether the federal courts need to take over Tennessee’s prison system again. Prison system officials contended they had solved nearly every problem raised by the Comptroller’s Office two years ago, but they presented few details […] The post Lawmaker raises specter of federal takeover of Tennessee prison system appeared first on Tennessee Lookout.
TENNESSEE STATE・2 DAYS AGO
Tennessee Lookout

The Shelby County Commission is taking steps to improve maternal mortality rates following Tennessee’s abortion ban — a move that is likely to increase the number of births in the state. On Monday, Shelby County commissioners voted in favor of awarding $201,800 to CHOICES Memphis Center for Reproductive Health, an organization that provides a birth […] The post Shelby County Commission funds midwife program appeared first on Tennessee Lookout.
SHELBY COUNTY, TN・2 DAYS AGO
Tennessee Lookout

Despite paying a $135,000 civil penalty for campaign finance violations, former state Senator and Rutherford County Mayor Bill Ketron landed a plum job this week with MTSU. Ketron, who lost both as a Democrat and Republican to Nancy Allen for the county mayor’s seat in the ’90s before winning a Senate seat, will be the […] The post Stockard on the Stump: MTSU recycles embattled state senator, county mayor appeared first on Tennessee Lookout.
RUTHERFORD COUNTY, TN・6 DAYS AGO

When every pharmacy in Southwest Tennessee refused to fill prescriptions from a McMinnville doctor under probe by federal authorities for peddling opioids to street dealers and addicts, Walgreens barred its pharmacists from rejecting them, records contained in a lawsuit reveal. When Walgreens learned a Dayton, Tenn., prescriber was shelling out opioids and other dangerous drugs […] The post Walgreens ignored warnings about overprescribing opioids, Tennessee suit shows appeared first on Tennessee Lookout.
TENNESSEE STATE・1 DAY AGO
Tennessee Lookout

As if there were any doubt midterm elections are nearing, right-wing politicians have turned up the heat on cultural and social issues to make sure we don’t forget.  Looney-tunes Georgia Congresswoman Marjorie Taylor Green held a Tuesday press conference outside the U.S. Capitol to announce she will lead a congressional movement to criminalize providing gender-affirming […] The post Tennessee GOP outrage over transgender clinic a cynical ploy for votes appeared first on Tennessee Lookout.
TENNESSEE STATE・7 DAYS AGO
Tennessee Lookout

A day after Gov. Bill Lee and state Republican leaders called for an investigation into transgender care at Vanderbilt University Medical Center, Democratic leaders pushed back, saying that “hate” was being used “for political purposes.” “Parents should be able to make decisions in regard to their children’s health. That is something Republicans claim to fight […] The post Democratic leaders push back on calls for Vanderbilt transgender clinic investigation appeared first on Tennessee Lookout.
TENNESSEE STATE・6 DAYS AGO

Fueled by a Twitter report, Republican lawmakers are planning to pass legislation in 2023 to stop Vanderbilt University Medical Center from performing pediatric transgender surgeries. Meanwhile, Gov. Bill Lee requested an investigation, and Attorney General Jonathan Skrmetti’s Office said he will use the “full scope” of his authority to make sure state law is being […] The post Republican lawmakers plan to strip Vanderbilt Hospital of child transgender surgeries appeared first on Tennessee Lookout.
TENNESSEE STATE・7 DAYS AGO
Tennessee Lookout

The nation’s largest Protestant association of Christian schools is joining forces with Tennessee and 19 other Republican states to try to block a Biden administration executive order that seeks to protect LGBTQ students in public schools from discrimination. The Association of Christian Schools International, whose members include 2,000 schools and 60 colleges across the country, […] The post Christian schools association intervenes in suit against U.S. Department of Education appeared first on Tennessee Lookout.
TENNESSEE STATE・6 DAYS AGO
Tennessee Lookout

The parents of three inmates who died behind bars in a span of just four months in 2021 are accusing private prison operator CoreCivic of Tennessee of repeatedly placing profits over safety and failing to police its own guards. “CoreCivic needs to be held accountable, and the (parents) intend to do just that,” attorney Janet […] The post Private prison contractor CoreCivic hit with two new lawsuits over inmate deaths appeared first on Tennessee Lookout.
TENNESSEE STATE・8 DAYS AGO
Tennessee Lookout

WASHINGTON — Conservative Republicans gathered outside the U.S. Capitol on Tuesday to commit to bringing legislation to the floor that would make it a felony to perform gender-affirming care on transgender youth, should the GOP take control of the U.S. House following the November midterm elections.  “How on earth can this be happening in America? […] The post Marjorie Taylor Greene leads GOP drive to criminalize gender-affirming care for transgender youth appeared first on Tennessee Lookout.
GEORGIA STATE・8 DAYS AGO
Tennessee Lookout

A group of legal experts says North Carolina is using a “fraudulent” document from 1818 to make its argument in a gerrymandering case set to be heard by the U.S. Supreme Court this fall. A Politico op-ed written by Ethan Herenstin, counsel for the Brennan Center for Justice at New York University Law, and Brian […] The post North Carolina uses “fraudulent” document in gerrymandering case before high court appeared first on Tennessee Lookout.
U.S. POLITICS・8 DAYS AGO
Tennessee Lookout

State lawmakers are expected to pour more funds into a Tennessee Bureau of Investigation crime lab personnel after a Memphis murder shed light on the fact some rape kits are languishing for eight months to nearly a year unless they get “rush” status from local law enforcement. The Jackson crime lab, which handles Shelby County […] The post Lawmakers promise to seek more TBI crime lab funding in wake of high-profile case appeared first on Tennessee Lookout.
TENNESSEE STATE・9 DAYS AGO
Tennessee Lookout

As Middle Tennessee rapidly runs out of places to dump its trash, one company is eyeing a possible alternative in Maury County, just outside the city limits of Columbia, Tenn.  The proposal by Trinity Business Group would bring a massive set of operations to the rural area: a tire shredding facility, construction and municipal waste […] The post Maury County superfund site eyed as destination for Middle Tennessee trash appeared first on Tennessee Lookout.
MAURY COUNTY, TN・10 DAYS AGO
Tennessee Lookout

WASHINGTON — More than 1,600 book titles across 32 states were banned from public schools during the 2021-2022 school year, with the bulk of the ban requests coming from a handful of right-wing groups pushing for censorship of books that feature LGBTQ+ characters and characters of color, a new report issued Monday said. “What I […] The post An ‘unprecedented flood’ of book bans engulfs U.S. school districts, PEN report says appeared first on Tennessee Lookout.
FLORIDA STATE・9 DAYS AGO

Now more than ever, tough and fair journalism is important. The Tennessee Lookout is your watchdog, telling the stories of politics and policy that affect the people of the Volunteer State. Our investigative reporters and journalists explain what’s happening, why it’s happening, and who it helps or hurts. We expose the relationships between politics, people and policy and we hold the powerful accountable. You can count on us for hard-hitting stories and incisive commentary on health care, hospital closures, mental health and addiction treatment, education, criminal justice reform and environmental issues. We are a nonprofit and all of our content is free for sharing. Tennessee Lookout is part of States Newsroom, a national 501(c)(3) nonprofit supported by grants and a coalition of donors and readers. Tennessee Lookout retains editorial independence.