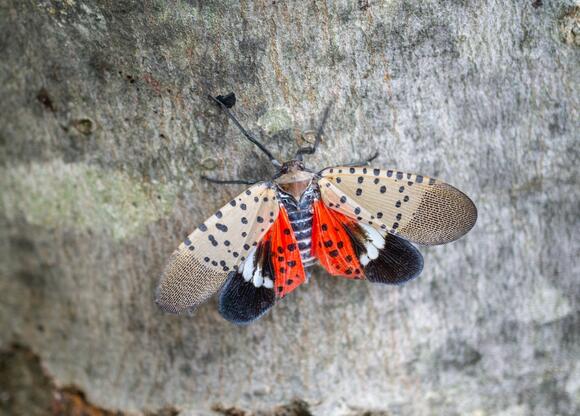 ALBANY, N.Y. ( WTEN ) — Upstate New York wineries and crops are at risk from the spotted lanternfly , which has now reached an infestation level, U.S. Senator Chuck Schumer said on Sunday. If the bug is not contained, it could cost the state millions of dollars.

“Summer is the perfect time to relax outdoors with a nice New York Riesling, but the rapid spread of the invasive spotted lanternfly threatens to suck the life out of our vineyards, agriculture and great outdoor tourism industry,” said Schumer. “We need to stomp out this bug before it spreads, otherwise our farmers and local businesses could face millions in damage and an unmanageable swarm.”

Schumer urged the United States Department of Agriculture to tap federal money from an account he has supported with over $200 million to curb the insect.

“For years now, I have warned about the pest, but now we are demanding action because pockets of Upstate New York are now infested by the bug that wreaks havoc on trees, vineyards and crops,” Schumer said. “This is a multi-million dollar threat to New York’s economy – both tourism and agriculture are now at risk if the spotted lanternfly goes unchecked. But the good news here is that we have federal funds already in place, that I secured, to help New York contain the bug and that we will be pushing for more.”

Other states have also been warning of the threat posed by the spotted lanternfly, and wildlife officials are asking people to kill the bugs if they spot them.

Schumer lauded the work being done currently by USDA and the state to monitor for sightings of the bug and to teach locals the best ways to spot this invasive species.

Throughout the past year, New York has seen decay and the start of infestations of spotted lanternflies in nearly all corners of the state. In 2019, after a series of serious infestations in nearby Pennsylvania, researchers at the Penn State College of Agricultural Sciences alerted that the spotted lanternfly had the potential to cost Pennsylvania’s economy $325 million a year and 2,800 jobs.

These are the names people change the most, Social Security says

Schumer said the spotted lanterfly poses a risk to New York’s agricultural health, too; they feed on the sap of more than 70 plant species, which makes plants vulnerable to illness and attacks from other insects. As mob feeders, they are known to quickly overwhelm vineyards and orchards, killing grape vines and other fruit bearers or making them unusable due to the excessive amounts of “honeydew” they release when feeding, which can lead to mold.

If you have spotted any of the lanternflies, NYS recommends taking pictures and sending information over to spottedlanternfly@agriculture.ny.gov .

ahh, because this insect is a threat to vineyards. Chuck, what about the billions of ash trees that the ash borers destroyed??? or all of the pine trees that are dying??? our woodlands and forest are being decimated by these invasive species. or all of the ticks carrying lyme, that are a direct threat to humans??? but by all means, protect those vineyards. $$$

Are wolves returning to the Adirondacks?

As far as anyone seems to know, it had been a while since anyone had seen a gray wolf in the Adirondack Park, when a Cherry Valley hunter came across one last year. The Ostego County man didn't know that what he had shot was a wolf, and the truth wasn't confirmed until DNA testing came back to the New York State DEC just last month.
ANIMALS・17 HOURS AGO
WWLP

Amazon hiring in Massachusetts ahead of holiday season with $3,000 sign-on bonus

A sign-on bonus ranging from $1,000 to $3,000 is being offered for select locations and positions as Amazon prepares to hire more than 1,600 employees in Massachusetts ahead of the holiday season.
MASSACHUSETTS STATE・19 HOURS AGO
WWLP

Scientists at the U.S. Geological Survey (USGS) are continuing to monitor the drought situation in New England which is expected to continue through autumn.
MASSACHUSETTS STATE・1 DAY AGO
WWLP

Fall Foliage Map: When is peak color in Massachusetts

22News Storm Team Meteorologist Adam Strzempko is working for you with a look at when we can expect to see peak fall color in western Massachusetts.
MASSACHUSETTS STATE・1 DAY AGO

Biden: ‘It’s going to take years’ for Florida to recover

The Department of Conservation and Recreation (DCR) says that anyone planning to go to the top of Mount Greylock will need to bring extra water.
ADAMS, MA・14 HOURS AGO
WWLP

Halloween is just 26 days away, so it is time to start thinking about Halloween costumes.
MASSACHUSETTS STATE・1 DAY AGO
WWLP

Most of the roughly 50 Venezuelan migrants who were flown to Martha's Vineyard last month at the behest of Florida Gov. Ron DeSantis are still being lodged at Joint Base Cape Cod, though Massachusetts is working to come up with better and less temporary solutions.
MASSACHUSETTS STATE・2 DAYS AGO

Resources for Massachusetts households that may struggle with home heating costs

22News provides resources for households that may struggle to keep up with the price surge.
MASSACHUSETTS STATE・16 HOURS AGO
WWLP

22News Storm Team Meteorologist Adam Strzempko is working for you with if the rain we've seen has improved our drought situation at all.
MASSACHUSETTS STATE・21 HOURS AGO

The League of United Latin American Citizens on Wednesday doubled the amount of reward money it is offering for information about a woman at the center of allegations of luring migrants from San Antonio onto planes bound for Martha's Vineyard last month.
SAN ANTONIO, TX・1 DAY AGO
WWLP

Under pressure to get legal sports betting up and running after the Legislature slow-walked the issue for years, the commission is facing a "mammoth scheduling challenge," chairwoman Cathy Judd-Stein said Wednesday.
MASSACHUSETTS STATE・1 DAY AGO
WWLP

Increased oil and gas prices are raising concerns for Western Massachusetts residents, especially when it comes to affording to heat their homes this fall and winter.
MASSACHUSETTS STATE・11 HOURS AGO
WWLP

The November election is about five weeks away and voters will be asked to vote not only for elected officials but on ballot questions.
MASSACHUSETTS STATE・1 DAY AGO

How to spot a potential scam when helping Hurricane Ian victims

Many people are doing anything they can to help the victims after Hurricane Ian impacted millions of people in Florida last week but you should watch out for potential scams.
FLORIDA STATE・2 DAYS AGO
WWLP

The new law whose ultimate fate is in the hands of voters would give undocumented immigrants "new legitimacy" in Massachusetts by allowing them to acquire driver's licenses, and it would also create at least a slight risk of producing government records that could be used to track those in the country without legal status, a new analysis concluded.
MASSACHUSETTS STATE・23 HOURS AGO
WWLP

Where does tax relief stand in Massachusetts?

The Economic Development bill remains in conference committee and lawmakers are staying tight lipped on the status of the bill.
MASSACHUSETTS STATE・12 HOURS AGO