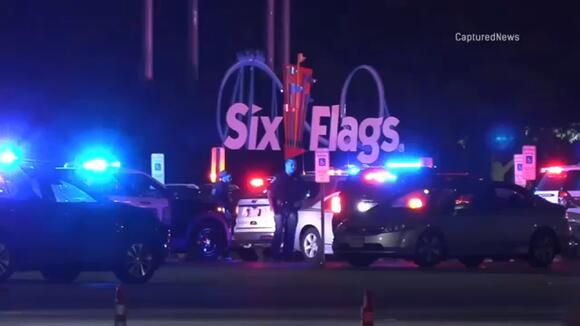 Illinois State Police responded to Six Flags Great America amusement park after reports of a shooting Sunday night. Three people were injured after shots were fired from a single vehicle in the parking lot, according to Six Flags. The vehicle then immediately drove away. Park security and officers from the on-site Gurnee Police Department Substation responded immediately, park officials said. Two people were transported by emergency services for evaluation. A third person declined treatment, the park said. "The park closed early with guests and team members departing under direction of the Gurnee Police Department," Six Flags said in a statement. People can be seen in video huddling together inside the park. Another video shows police lights in the distance.

Police are responding to Six Flags Great America in Gurnee, Illinois, after reports of a shooting.

The amusement park is located in Gurnee, Illinois, approximately 45 miles north of Chicago. Social media reports of an active shooter have been dispelled by the Lake County Sheriff's Office, which is assisting the Gurnee Police Department with the investigation. A spokesperson saying there is no evidence of that at this time. No further details have been provided by police. This is a developing story and more information will be provided when available.

Relatives had season passes and said it was bad. Did not renew this year. Fill in the blanks.

this is happening all the time now. sad. can't take the family anywhere safe it seems

No place is safe in Illinois, folks. Come for the hotdogs and stay because you got shot.

The family of the 3-year-old boy who was allegedly pushed into Lake Michigan Monday said that he passed away Sunday morning.
CHICAGO, IL・10 HOURS AGO
ABC 7 Chicago

A man and woman were killed after their car crashed into a building in the Brighton Park neighborhood Sunday night, Chicago police said.
CHICAGO, IL・15 HOURS AGO
ABC 7 Chicago

Prosecutors said the child's aunt's charges could be upgraded following his death.
CHICAGO, IL・2 HOURS AGO

"I contacted the two officers who helped me previously and said, 'you're never gonna believe this, but my car was stolen again.'"
CHICAGO, IL・6 HOURS AGO
ABC 7 Chicago

The question of how someone could breach security at the Chicago Police Department's Homan Square facility is complicated by the importance of the facility to CPD's citywide operation.
CHICAGO, IL・1 HOUR AGO
ABC 7 Chicago

Aurora police are investigating a shooting that has left one person dead and another in critical condition.
AURORA, IL・1 DAY AGO
ABC 7 Chicago

CPD reminds people to always be aware of their surroundings, call 911 to report suspicious activity, never pursue a fleeing assailant and provide information to police.
CHICAGO, IL・16 HOURS AGO

The man approached the woman and began pulling her towards a van when she was able to escape, police say
CHICAGO, IL・7 HOURS AGO
ABC 7 Chicago

The woman who recorded video of the incident said she went searching for help at the train station, but no one was around.
CHICAGO, IL・2 HOURS AGO
ABC 7 Chicago

Two men were shot, one fatally, on the city's North Side, Chicago police said.
CHICAGO, IL・2 DAYS AGO
ABC 7 Chicago

The Hoka Chicago Half Marathon returns to Jackson Park Sunday and the route will cause some street closures untill Sunday afternoon.
CHICAGO, IL・21 HOURS AGO

Two men from Joliet were killed after what police are calling a targeted shooting at a bar in Grundy County Saturday.
GRUNDY COUNTY, IL・2 DAYS AGO
ABC 7 Chicago

The Major Accidents unit is investigating after a woman was killed and four others were hurt in a DuSable Lake Shore Drive crash, police said.
SOUTH HOLLAND, IL・2 DAYS AGO
ABC 7 Chicago

The teen was walking with a friend on the sidewalk when someone in a black SUV fired shots from inside the vehicle, according to the police.
CHICAGO, IL・2 DAYS AGO
ABC 7 Chicago

A 16-year-old boy has died after he and another teen were critically hurt in a West Side drive-by shooting, authorities said.
CHICAGO, IL・1 DAY AGO
ABC 7 Chicago

A man was fatally stabbed during an argument on the city's Northwest Side, Chicago police said.
CHICAGO, IL・2 DAYS AGO
ABC 7 Chicago

One neighbor's doorbell camera captured what appeared to be a man shooting his family members before barricading himself inside his home and setting it on fire.
OAK FOREST, IL・2 DAYS AGO
ABC 7 Chicago

An online fundraiser is helping to raise money for the victims' funerals as a vigil is being planned for Monday night.
OAK FOREST, IL・47 MINUTES AGO