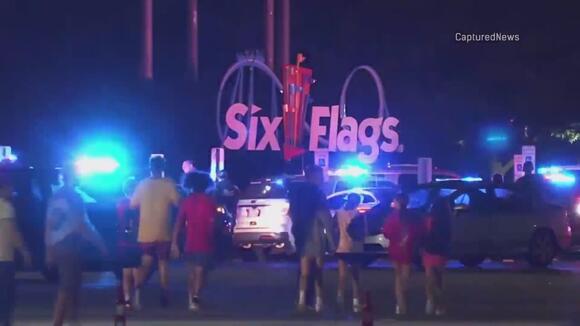 According to a police source, the injuries are believed to be non-life-threatening. No one is in custody.

The amusement park, which closes at 8 p.m., was evacuated.

Three people were injured this evening when shots were fired from a single vehicle in the parking lot. The vehicle immediately drove away. Park security personnel and officers from the on-site Gurnee Police Department Substation responded immediately. Emergency services responded, transporting two persons to the hospital for evaluation. A third person declined treatment.

The park closed early with guests and team members departing under direction of the Gurnee Police Department. Law enforcement is investigating.

WGN News spoke with Laurie Walker and her daughter, Grace, who were inside the park when the shooting incident occurred. Walker said they were waiting in line for the ‘Ricochet’ in the southwest area of the park around 7:50 p.m. when she noticed people running in a panic.

“There is an active shooter, get down, get down,” Walker recalled someone shouting. “We didn’t know what was going on, so we get down.”

Walker and her daughter climbed over two fences to get “out of plain view sight,” where she could call her husband. After hiding out for a short while, Walker says she was able to leave the park.

Authorities told WGN News that law enforcement officials are actively searching the area to ensure everyone is located and accounted for.

This is a developing story. Stay with WGN News for updates.

Six Flags has become completely unsafe over the last few years. A nice place now ruined. We don’t go anymore. Last time a huge fight broke out and nobody did anything. Nobody was even removed from the park.

Some of the strictest gun laws in the country. Bet they still blame the guns.

Banging good times, six flags is not the only ones out to take all your money!

CHICAGO — A 39-year-old man was shot in the city’s Edgewater neighborhood. Chicago police said the man was walking on the 1000 block of West Catalpa Avenue around 12 a.m. early Friday morning when someone in a black sedan fired shots. The man was taken to Illinois Masonic Medical Center in good condition with a […]
CHICAGO, IL・1 DAY AGO
WGN News

"We were definitely able to remove this dangerous offender from the CTA," said Brendan Deenihan, CPD's Chief of Detectives.
COOK COUNTY, IL・1 DAY AGO
WGN News

ZION, Ill. — A 25-year-old man was found dead with gunshot wounds Saturday morning by Zion police officers. Police said they were called to the 2900 block of Gabriel Avenue around 7:14 a.m. for a report of an unresponsive person laying on the ground in a driveway off an alley. When officers arrived, they found […]
ZION, IL・8 HOURS AGO

Body of man pulled from lake in Rogers Park

CHICAGO — The body of a 54-year-old man was found dead along the shore of Hartigan Beach Park Friday morning, police say. The CFD found the man from the water at the 1000 block of West Albion Avenue in Rogers Park around 6:50 a.m. Detectives are conducting a death investigation, pending autopsy results. There was […]
CHICAGO, IL・1 DAY AGO
WGN News

CHICAGO — A community meeting was hosted by local leaders in the wake of several high-profile crimes, including the arrest of Quavon Ewing — the 32-year-old accused of attacking and the attempted kidnapping of three women in the span of just 45 minutes last Sunday. Ewing was later charged with attempted kidnapping and aggravated battery […]
CHICAGO, IL・9 HOURS AGO
WGN News

14-year-old and woman shot in Roseland

CHICAGO — A 14-year-old boy and woman were shot in Roseland Thursday evening. According to police, the two were near the sidewalk on the 500 block of East 104th place around 6:55 p.m. when someone fired shots. The boy was shot in the back and transported to the Comer Children’s Hospital and is reportedly in good […]
CHICAGO, IL・1 DAY AGO
WGN News

3 teens among 4 charged in carjacking, police chase that killed woman

CHICAGO — Three teens and one adult were charged Friday in connection with a carjacking and police chase that resulted in the death of a woman. Police said a 15-year-old male, two 17-year-old males and 22-year-old Enrique Angeles have been charged with multiple felonies. One of the 17-year-old was charged with murder. According to police, […]
CHICAGO, IL・1 DAY AGO

DOWNERS GROVE, Ill. — The Downers Grove Public Library cancelled a drag queen Bingo event hosted for teens due to alleged threats made, and details of the incident were released Thursday. According to Downers Grove police, the library received a letter that included a bullet and a handwritten return address on the envelope that said, […]
DOWNERS GROVE, IL・1 DAY AGO
WGN News

CHICAGO — Chicago police have arrested a person in connection with an attack and robbery on the CTA Red Line. A man was attacked and robbed by two people early Sunday morning a the Red Line train near 95th Street. Police said 30-year-old Solomon Washington of Chicago Heights was arrested Wednesday in connection to the […]
CHICAGO, IL・2 DAYS AGO
WGN News

CHICAGO — A construction worker was was robbed and shot In West Englewood Thursday afternoon. A 42-year-old man was working on a construction site at the 5700 block of South Paulina Street around 12:26 p.m. when an unknown person approached him, displayed a handgun and demanded his belongings, police say. According to officials, the man, […]
CHICAGO, IL・2 DAYS AGO

BATAVIA, Ill. — A 55-year-old woman died after being struck by a car Wednesday night in Geneva. The woman was walking southbound near the 700 block of East State Street, east of Sandolm street around 6:48 p.m. when she was struck by a black Hyundai that was travelling westbound, according to police. Police said the woman […]
GENEVA, IL・2 DAYS AGO
WGN News

Woman dies after being found unresponsive at Wrigleyville bar: police

CHICAGO — A 27-year-old woman died after being found unresponsive at a bar in Wrigleyville Saturday morning, police said. The woman was found unresponsive near the 900 block of West Belmont Avenue around 4:42 a.m. She was transported to Illinois Masonic Hospital where she was pronounced dead. The cause of death is still unknown and no […]
CHICAGO, IL・18 HOURS AGO
WGN News

U of Chicago police issue alert after 5 robberies near campus

CHICAGO — University of Chicago police put out an alert about five off campus robberies that happened in a six-hour span Thursday that all shared similar details. The first incident happened around 11:30 a.m. on the 1200 block of East 53rd Street. A person walking to their car in an off-campus parking lot was approached […]
CHICAGO, IL・1 DAY AGO
WGN News

MARKHAM, Ill.— Two people were killed and one is in critical condition in a four-way car crash that resulted in an explosion Friday night in Markham, police said. According to officials, a person in a Dodge Charger was travelling at high speeds on 159th street near the I-294 Markham overpass, jumping the curb which resulted […]
MARKHAM, IL・21 HOURS AGO
WGN News

Families searching for the perfect place to settle down face a difficult task — finding the city with the best school system, low crime rates, quality health care and community support can leave prospective homebuyers feeling flustered. Enter Fortune researchers, 215,000 data points, and 2,000 cities and towns across the U.S. and you get the […]
CHICAGO, IL・1 DAY AGO
WGN News

EVANSTON, Ill — An Evanston man was charged with robbing two USPS postal carriers. Earlier this week, police issued a warning after two postal workers were robbed. The most recent incident happened just before noon Tuesday in the 2400 block of Nathaniel Avenue. Arriving officers learned a carrier was robbed and assaulted. One day earlier, around […]
EVANSTON, IL・1 DAY AGO
WGN News

From the WGN Archives: A look back at the ‘Tylenol Murders’

CHICAGO — Forty years ago this week, what would become known as the “Tylenol Murders” started to tragically unfold in Chicagoland. Over the span of three days seven people died from poisoning after ingesting cyanide-laced capsules of Extra -Strength Tylenol bought in local drugstores. The case terrified Chicagoans, gripped the nation, and led drug companies […]
CHICAGO, IL・2 DAYS AGO