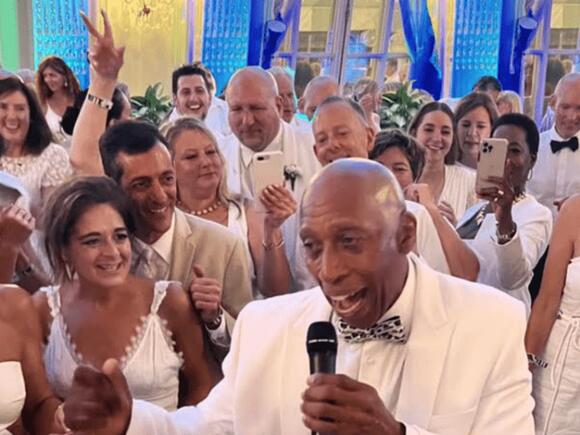 Reaching for the stars to benefit the Jeffrey Osborne Foundation, including the Boys & Girls Club of Newport County among this year’s beneficiaries, the gala’s fundraising campaign exceeded the past record, and reached over $125,000 in total raised, the net proceeds of which will fund the Foundation’s mission to support initiatives and organizations in Rhode Island that keep music and the arts in our public school systems, sustain growth and enrichment programs and provide basic necessities of food, shelter, and a safe haven for families and children in need.

“I want to thank the attendees of the gala, who are a part of the Newport Polo family, for their amazing generosity. I am very proud of what we were able to achieve together,” stated Dan Keating, Newport Polo Founder & President, “and I’m also impressed with how many great dancers we have in our midst!”

Anticipation was at an all-time high for the sold-out affair to fete the New Zealand Polo Team as this year’s guests of honor. Stardust befell the City by the Sea at cocktail hour, beginning with the evening’s first stop for a sunset view and reception on the Newport waterfront from the rooftop of Brenton Hotel, where Honorary Gala Ambassador, Jeffrey Osborne glad-handed the sparkling white clad entourage, before a galactic shift to the main event at Rosecliff, the famed Bellevue Avenue mansion built on silver fortunes to host the greatest parties of the late 1800’s.

“In memory of my brother, Clay Osborne, one of the great jazz singers of RI, whose dream was to provide music scholarships for our youth to help fulfill their dreams, I have committed to continue the work he started, by establishing the Jeffrey Osborne Foundation, which has raised more than $1.5 million dollars since 2012, to fulfill those dreams and to provide basic needs for the youth here in my home state,” explained Osborne during introductions at the gala. “I’m pleased to include the Boys and Girls Club of Newport County among the beneficiaries of this unique and truly special formal event – which you rarely see any more – along with the organizations that the Jeffrey Osborne Foundation supports, including the Boys and Girls Club of Providence, Amos House, St. Mary’s Home for Children, Button Hole, the RI Philharmonic School of Music and the Met School”, added Osborne, “and I can’t thank you enough for this opportunity to make a difference together, with your support.”

Eye candy included glamorous white couture evening gowns in every style and silhouette, in lace, sequin, feathered, sheer or layered, ruffled, fitted or flowing, closely escorted by elegant white suited and jacketed gents and dandies in statement attire, promenading through the estate under the spell of silver’s superior electrical and thermal conductivity!

And it wasn’t just the storied Versailles replica mansion from white precious metal that inspired wonder, there were glittering jewels on parade to stand out in the sea of white, including Sheri Osborne in white gold & diamond necklace and diamond hoop earrings and gala co-chair Agnes Keating in David Yurman gold and diamond starburst earrings and pendant from the Providence Diamond Collection.

A tantalizing collection of curated treasures were on display on the terrace, in contention from bidders in a Silent Auction during the night, which included remote bidders competing this year.

As twilight conceded to the evening’s brightest stars, the sounds of perennial favorite musical ensemble, Decades by DeZyne called the party to order in the grand ballroom to get to the heart of the evening. Newport International Polo Series Founder, Dan Keating, inaugurated the main event with his welcome remarks and introductions including:

For a second consecutive year, Osborne who moved to L.A. as a teen when his musical talent was discovered, has scheduled his concert performances around returning to Newport to personally attend the weekend events, and rewarded this year’s generous attendees with a mini concert of 4 greatest hits in his legendary baritone voice, bringing the house to its feet with his hit singles On the Wings of Love and to the mic for You Should Be Mine, and surrounded him on the dancefloor for Back In Love Again and Stay With Me Tonight, spanning decades of his legendary R&B hits and gold & platinum records.

After-dinner guests arrived in time for a dessert bar, cocktails and a final chance at the silent auction bounty, in between gyrations to hits through the ages on the throbbing dance floor ’til the stroke of midnight, when shooting stars arched to the iconic Skybar, Clarke Cooke House’s VIP stratosphere, for the waterfront’s last dance of the fairytale night.