Man dies in hospital after being arrested in Salt Lake City 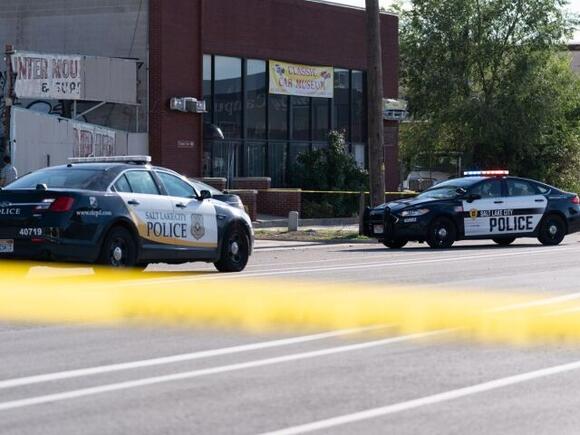 SALT LAKE CITY — Salt Lake City Police say a man died in the hospital Sunday after being taken into custody.

Officers were called to a business near 300 West and 800 South shortly after 3 p.m. on a report of a man attempting to steal from the business and then leaving.

Police responded to the area and found the suspect near 350 W. 700 South, and took him into custody.

While being taken into custody, the man fought with officers, according to SLCPD Sgt. Mark Wian. Two officers reportedly sustained "significant" injuries, but not life-threatening. They were taken to a local hospital to be checked out. The exact nature of their injuries was not immediately available.

Wian said the officers then noticed that the man had become unconscious and unresponsive, and they attempted lifesaving measures including administering naloxone.

Police said he was taken to a local hospital in critical condition, where he died.

Wian said no shots were fired during the incident.

SLCPD initiated its "officer-involved critical incident" protocol, which includes instances when police use potentially deadly force (whether or not the individual survives) and when a suspect dies while in police custody. These instances result in an investigation by an outside police agency.

Body-worn camera footage from the officers involved is expected to be released within 10 business days after the incident.

"I want to reassure Salt Lake City that the women and men of the Salt Lake City Police Department are professionals who have pledged to protect our community. During this incident, two of our city's police officers were hurt. I'm grateful those injuries were not more serious. The officer-involved-critical-incident protocol provides an independent, transparent, and objective process."

This past week, SLCPD released bodycam video from an incident in which a woman died in the hospital weeks after her arrest, and months later, the medical examiner declared her cause of death as homicide.

here we go again SLC Utah . cheap Mike Brown and mayor Aaron mendenhall all that counseling you're doing in the world in Salt Lake City and spending all that money on I don't think it's working for the homeless you just keep killing them

Bountiful teen recovering after being hit by car while in crosswalk

A teenager is in the hospital recovering from multiple injuries including a collapsed lung after he was hit by a car in a crosswalk while riding his bike.
BOUNTIFUL, UT・17 HOURS AGO
FOX 13 News

A five-year-old boy remains hospitalized Thursday, one day after being hit by a pickup truck while riding his bike near his home in Roy.
ROY, UT・12 HOURS AGO
FOX 13 News

On a Southwest flight from San Jose to Salt Lake City Wednesday night, a threatening note that has been deemed as "non-credible" was found on the plane.
SALT LAKE CITY, UT・23 HOURS AGO
FOX 13 News

Charges were filed Wednesday against a man who is accused of shooting and killing his girlfriend in Salt Lake City last week.
SALT LAKE CITY, UT・1 DAY AGO

Five-year-old in critical condition after being hit by truck

A child is in critical but stable condition after being hit by a pick-up truck while riding a bicycle in Roy.
ROY, UT・1 DAY AGO
FOX 13 News

1 killed, another in critical condition after being hit standing on I-15

One person was killed and another is in critical condition after being hit by passing traffic on Interstate 15 in the Ogden area Tuesday.
OGDEN, UT・2 DAYS AGO

A road is closed in Pleasant Grove following a car crash that killed one person and left two others in serious condition.
PLEASANT GROVE, UT・2 DAYS AGO
FOX 13 News

After a social media post circulated online Tuesday morning about a potential gun threat at West High School, officials have said there is no danger.
SALT LAKE CITY, UT・1 DAY AGO
FOX 13 News

A teen was in juvenile court Wednesday after committing a homophobic hate crime in Sandy two months prior.
SANDY, UT・1 DAY AGO
FOX 13 News

A man was arrested last week after thousands of fentanyl pills and hundreds of heroin doses were found in his bags when he arrived at the Salt Lake City International Airport, according to police.
SALT LAKE CITY, UT・3 DAYS AGO

Tooele schools placed on lockout after nearby armed robbery

Three Tooele schools were placed on lockout status after an armed robbery took place in the general area on Tuesday.
TOOELE, UT・2 DAYS AGO
FOX 13 News

Paramore is condemning "violence, homophobia, or bigotry of any kind" after a man was kicked out of their show in Salt Lake City for assaulting multiple women, including an engaged couple.
SALT LAKE CITY, UT・1 DAY AGO
FOX 13 News

A man who police believe fled the United States after murdering a Utah woman in 2015 has been arrested.
WEST VALLEY CITY, UT・4 DAYS AGO
FOX 13 News

A 16-year-old has been arrested in connection to the shooting death of another teen in Salt Lake City earlier this month.
SALT LAKE CITY, UT・6 DAYS AGO
FOX 13 News

A Lehi family is mourning the unexpected loss of their high school son, eighteen-year-old Carter Hult, who passed away on September 17.
LEHI, UT・1 DAY AGO
FOX 13 News

Orem man taken into custody after exchanging gunfire with police

An Orem man was taken into custody Thursday morning after exchanging gunfire with police outside a home.
7 DAYS AGO
FOX 13 News

Yes, the mosquitoes in Utah are worse this year

The mosquitos we’re seeing in our cities aren't breeding in over-watered lawns; the insects are all coming from our wetlands.
ROY, UT・7 HOURS AGO