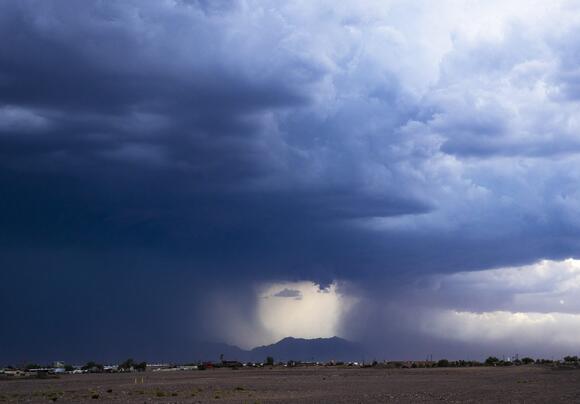 According to the National Weather Service in Phoenix, "extremely slow" storm motion, high moisture levels and scattered weather activity was expected to bring more heavy rainfall into the state.

Residents across Arizona could expect life-threatening flash flooding on Sunday evening, the weather service said. Thunderstorm conditions were also expected to increase through the late afternoon hours, mainly for the northern parts of the state.

Residents in Apache and Navajo counties were advised to stay away from low water crossings, which are common in mountainous terrains, as they can become extremely dangerous when flooded.

The weather service advised people to stay away from all creeks, washes and rivers and to seek alternate routes if they encounter flooded roadways.

The westbound lanes of State Route 238 were closed due to flooding at milepost 38 near Rio Bravo Road, according to the Arizona Department of Transportation.

There was no estimated time to reopen the highway and ADOT advised drivers to expect delays.

Other locations where flash flooding is expected include:

Moisture and storm activity would likely be calmer into the middle of the week, but it was expected to pick up again by next weekend, the weather service said.

In the Phoenix area, about 2,300 Salt River Project customers were experiencing weather-related outages since about 4:30 p.m., said Kathleen Mascareñas, an SRP spokesperson.

More than half of those customers were located in Phoenix, between 15th Avenue and 12th Street and between Roeser Road and South Mountain Avenue, Mascareñas said.

More significant outages occurred in Chandler, Gilbert, Peoria and Tolleson. All services were expected to be restored by 9:45 p.m.

Mascareñas advised people to stay informed about outages and to keep a storm safety kit at home.

"We definitely encourage customers to have a safety kit where they keep first-aid items, medication, a flashlight, water," she said. "With monsoon weather, it's important to be prepared."

Nearly 500 Arizona Public Service customers near Prescott and Kirkland were also affected by outages at about 4:30 p.m. due to storm-related conditions, according to the APS outage viewer .

About 70 more outages were reported in Salome at about 5:30 p.m.

"As the storm passes and it becomes safe field personnel will be dispatched to assess the extent of the damage and restore power," APS said.

Power in Salome was expected to return by 8:10 p.m.

We live at the base of the Hualapai Mountains in Kingman. The main road was like a river a couple days ago. And the wash behind our apartment has filled up twice in the last week.