'He Has Confidence in Me': Rams WR Lance McCutcheon Talks Chemistry With QB Bryce Perkins 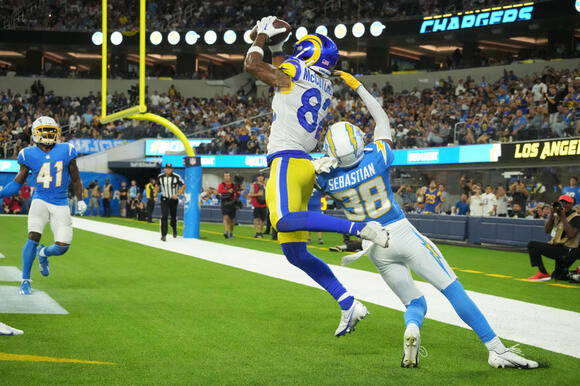 The Los Angeles Rams are certainly not hurting for talent at the receiver position.

They feature arguably the best receiver in the NFL in Cooper Kupp, as well as the offseason addition of Allen Robinson. When Van Jefferson suits up this season for the first time, the Rams' top three is one of the best receiving groups in the NFL.

However, there is no such thing as too much talent at any given position. The preseason is a big opportunity for depth guys to make their name known, which is exactly what receiver Lance McCutcheon did in the Rams' first preseason game against the Los Angeles Chargers.

In his first NFL action, the rookie out of Montana State showed instant chemistry with quarterback Bryce Perkins . McCutcheon would bring in five catches for 87 yards and both of Perkins' touchdown passes, including the game-winning touchdown that put the Rams up 29-22 for good.

The chemistry between McCutcheon and Perkins has been something built between the duo throughout training camp, as McCutcheon has full confidence in Perkins to get him the ball.

"Bryce played a great game and he's been having a great camp," McCutcheon said. "We've built our connection up and chemistry together as camp has gone on."

"It's big having a guy like that back there that is able to put the ball in the general area. He has confidence in me and I have to give him confidence back by making the catch."

While it is ultimately unlikely that McCutcheon sees a lot of playing time early on in his rookie season for the Rams, there is no doubt he made a strong impression in his NFL debut. As the preseason goes on, if McCutcheon continues to flash the potential that he did against the Chargers, he could slowly work his way up the depth chart.

Los Angeles Rams linebacker Bobby Wagner might've had the most unique tackle of his Hall-of-Fame career on Monday night against the San Francisco 49ers.
NFL・2 DAYS AGO
RamDigest

Rams Offense Stumped In Loss to 49ers in San Francisco

The Los Angeles Rams offense did not look like itself on Monday Night
SAN FRANCISCO, CA・2 DAYS AGO
Inside The Knights

ELMIRA, N.Y. (WETM) – It’s time for week five of the Joe Gilbert Watch. The NFL season is moving fast and Horseheads’ own Joe Gilbert continues to battle as the offensive line coach of the Tampa Bay Buccaneers. This week, Tampa Bay will play for the early-season lead in the NFC South as they welcome […]
ATLANTA, GA・34 MINUTES AGO

Only a sophomore, Mater Dei High School (California) running back Jordon Davison has offers from every major college football program in the country, including the USC Trojans. Last weekend, Davison was part of the big recruiting visit for the USC home game vs. Arizona State. ...
LOS ANGELES, CA・30 MINUTES AGO
RamDigest

Los Angeles Rams linebacker Bobby Wagner has over 1,400 career tackles, but one that won't show up in the stat sheet will stick with him - and the recipient - for some time.
NFL・1 DAY AGO
RamDigest

Rams OL Coleman Shelton Ruled OUT vs 49ers With Injury

The Los Angeles Rams are down yet another offensive lineman early on against the San Francisco 49ers
SAN FRANCISCO, CA・2 DAYS AGO

McVay discussed the Rams early offensive struggles and if he believes they can turn things around moving forward.
NFL・11 HOURS AGO
RamDigest

The Los Angeles Rams' Super Bowl defense has featured disappointing finales that have doomed them in the early going.
NFL・1 DAY AGO
RamDigest

Even as he gears up for a pivotal division bout on Monday night with the San Francisco 49ers, Los Angeles Rams coach Sean McVay is putting things into perspective after the injury to Miami Dolphins quarterback Tua Tagovailoa.
NFL・2 DAYS AGO
RamDigest

Los Angeles Rams quarterback Matthew Stafford has been quite generous to the San Francisco 49ers defense in his four meetings against them since arriving in LA.
NFL・1 DAY AGO

In the wake of the dangerous Tua Tagovailoa situation, the Los Angeles Rams' shutdown defender believes that the league's priorities are out of sync.
NFL・2 DAYS AGO
RamDigest

A complete recap of the first half between the Rams and 49ers.
SAN FRANCISCO, CA・2 DAYS AGO
RamDigest

The Rams travel to San Francisco for a Monday Night Football matchup with the division foe 49ers in Week 4.
SAN FRANCISCO, CA・2 DAYS AGO
RamDigest

A consistent Rams run game vs. San Francisco's stout defensive front will be a key to an LA victory.
SAN FRANCISCO, CA・2 DAYS AGO