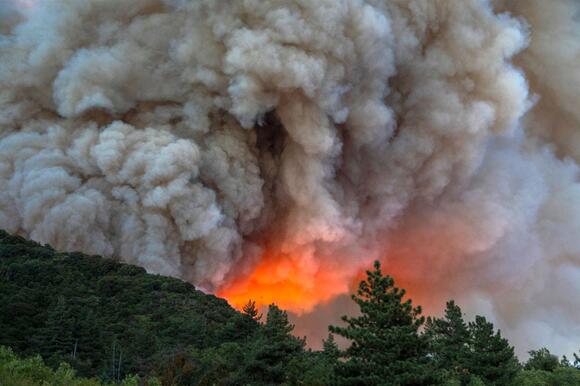 SAN FRANCISCO (KCBS RADIO) – As temperatures rise and smoke filters down from a Northern California wildfire, officials have issued a Spare the Air Alert.

The Bay Area Air Quality Management District on Monday announced a Spare the Air Alert for Tuesday, citing forthcoming high temperatures and smoke from the Six Rivers Lightning Complex burning near the Willow Creek area in Humboldt and Trinity counties.

Air officials forecast moderate air quality throughout much of the region, with eastern Contra Costa County and southern Santa Clara County set to have unhealthy air quality for sensitive groups.

That coincides with the National Weather Service Bay Area issuing an excessive heat warning for those areas on Tuesday, with the day's high temperatures set to surpass 100 degrees.

The Six Rivers Lightning Complex ignited on Aug. 5. It had burned 19,272 acres with 17% containment as of Monday morning, making it the second largest active wildfire in the state.

It could soon be the biggest blaze still burning in the state, however. The 60,392-acre McKinney Fire was 95% contained as of Monday morning. More personnel were assigned to the Six Rivers Lightning Complex (2,045) than the McKinney Fire (1,511) as of that time.

In the part two in a series of special reports from Santa Rosa, KCBS Radio’s Jeffrey Schaub visited with one family who lost most everything in the Tubbs Fire but are grateful for their new home.
SANTA ROSA, CA・10 HOURS AGO
KCBS News Radio

One year after a long-awaited conservation project to expand the habitat for an endangered salmon species in the Santa Cruz Mountains was first implemented, there are signs it’s already paying off.
DAVENPORT, CA・2 DAYS AGO
KCBS News Radio

A wave of volunteers from across the country, including the Bay Area, are flowing to Florida to help with disaster relief in the aftermath of Hurricane Ian.
FLORIDA STATE・2 DAYS AGO

The California State Building in downtown Oakland has been evacuated on Tuesday after a “suspicious package” was received on the premises, according to multiple reports.
SAN FRANCISCO, CA・2 DAYS AGO
KCBS News Radio

The Blue Angels took to the skies from Oakland International Airport on Thursday for test flights ahead of this weekend’s Fleet Week Air Show. One of those pilots is a San Francisco native
SAN FRANCISCO, CA・5 HOURS AGO
KCBS News Radio

Researchers at Stanford say a Silicon Valley fault line most people are unaware of could generate an earthquake as large as the 1989 Loma Prieta Earthquake.
GILROY, CA・3 DAYS AGO
KCBS News Radio

The fire broke out last August and would go on to destroy 600 homes in the town of Grizzly Flats. But the destruction could have been avoided if the Forest Service hadn’t mismanaged its efforts, according to some.
SAN FRANCISCO, CA・3 DAYS AGO

How to approach cruises after Norwegian ends vax requirement

One of the world’s largest cruise lines, Norwegian, has become the first major cruise company to end all of its vaccination requirements. How should this impact your vacation plans?
SAN FRANCISCO, CA・1 DAY AGO
KCBS News Radio

While Alexis Gabe’s family and law enforcement have continued to search for her body, a recent endeavor found remains in Amador County, which have not yet been identified.
AMADOR COUNTY, CA・3 DAYS AGO
KCBS News Radio

According to a Twitter thread posted on Sunday, a new agreement was negotiated to include elements the more than 400 essential city workers had been asking for.
SANTA CRUZ, CA・3 DAYS AGO
KCBS News Radio

While most people know about San Quentin State Prison, they probably haven’t heard of a new program that’s helping those inside jumpstart their careers.
SAN QUENTIN, CA・2 DAYS AGO

Price of gas is above $6 a gallon again in California

The pain at the pump is getting worse, and analysts warn that prices may also break new records soon if they keep increasing at the current pace of 10-15 cents a day.
SACRAMENTO, CA・6 DAYS AGO
KCBS News Radio

Hearing aids will soon be available for over-the-counter purchase at local pharmacies, breaking down existing barriers to care. At 80 years old, 80-90% of people will have hearing loss, however, many will not seek out treatment.
SAN FRANCISCO, CA・4 HOURS AGO
KCBS News Radio

Two Berkeley High School students were killed last weekend when a gunman open fired at a house party in Oakland’s Longfellow Neighborhood. No arrests have been made.
OAKLAND, CA・3 DAYS AGO
KCBS News Radio

Federal officials have launched a criminal probe into PG&E, as part of their ongoing investigation into what ignited the Mosquito Fire, the largest wildfire in California this year.
CALIFORNIA STATE・9 DAYS AGO
KCBS News Radio

Flu and COVID 'twindemic' could strain healthcare system this winter

Are we ready for a “twindemic?” Health experts warn that this winter could be the perfect breeding ground for surging flu and COVID-19 cases.
SAN FRANCISCO, CA・7 DAYS AGO
KCBS News Radio

The Oakland Police Department released a video Monday afternoon in an effort to try to identify people wanted in connection with the mass shooting on an Oakland school campus last week.
OAKLAND, CA・3 DAYS AGO
KCBS News Radio

Since communities of color were disproportionately hit during the COVID-19 pandemic, does that mean those communities are also experiencing higher rates of Long COVID?
SAN FRANCISCO, CA・6 DAYS AGO