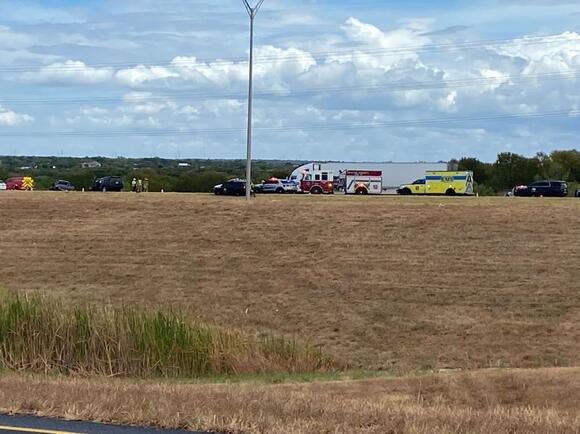 ATCEMS tweeted three patients were involved in the collision between the 5000 and 7500 blocks of SH 130.

Originally, ATCEMS said two patients were pinned in their vehicles and possibly dead, but the official announcement wasn’t made until later.

SH 130 was closed at FM 969 due to the crash but has reopened, according to the Texas Department of Transportation.

A vehicle hit a pole near a northwest Austin school early Monday morning, knocking out power to the campus and nearby neighborhood, according to Austin Energy.
AUSTIN, TX・1 DAY AGO
KXAN

3 injured in I-35 crash Saturday night in north Austin

1 adult transported from rollover wreck on I-35

AUSTIN (KXAN) — Austin-Travis County EMS responded at 2:39 pm to a rollover collision at the 5500 block near Reinli Street on the northbound Interstate 35 highway. ATCEMS tweeted that one adult patient involved in the collision has sustained serious, potentially life-threatening injuries and was transported to Dell Seton Medical Center. EMS is evaluating two […]
AUSTIN, TX・3 DAYS AGO
KXAN

Over 100 pounds of cocaine found during Fayette County traffic stop

The Fayette County Sheriff's Office found over 100 pounds of cocaine inside a hidden compartment of a truck during a traffic stop this weekend.
FAYETTE COUNTY, TX・23 HOURS AGO
KXAN

According to Austin Energy's social media, the cause of the outage is still being investigated.
AUSTIN, TX・4 HOURS AGO
KXAN

The crash involved an Austin Police Department car and another vehicle. It happened on Burnet Road near the Highway 183 overpass.
AUSTIN, TX・3 DAYS AGO
KXAN

What’s the latest with the Confederate monuments in Bastrop County?

Just over two years ago, County Commissioners approved moving the two monuments, with private funding that was raised. However, the monuments still sit on the grounds of the courthouse.
BASTROP COUNTY, TX・19 HOURS AGO

September 2022 one of the driest on record in Austin

September is typically our fourth wettest month of the year with almost 3.5" of rain in an average year in Austin.
AUSTIN, TX・1 DAY AGO
KXAN

Voters in two Central Texas communities will weigh out whether to continue CapMetro services or leave their partnership with the transit authority this November.
LAGO VISTA, TX・23 HOURS AGO
KXAN

Several people in a south Austin neighborhood said their doorbell cameras have caught the same people swiping packages from their porches.
AUSTIN, TX・20 HOURS AGO
KXAN

Water leak cost a local family hundreds of dollars while out of town; what they want you to know

Pflugerville resident Jon Browning explained he typically pays a little over $70 for their water use every month, but in September, just one bill was $439.94.
PFLUGERVILLE, TX・2 DAYS AGO
KXAN

A 17 year old is facing a felony charge of false alarm or report after a fake threat was made against Vista Ridge High School, according to an affidavit.
CEDAR PARK, TX・23 HOURS AGO
KXAN

Parents lined up outside Dobie Middle School in northeast Austin on Tuesday after the campus lost power.
AUSTIN, TX・4 HOURS AGO
KXAN

But there's much more to this competition than just the hairstyle. It benefits a charity that gives back to veterans.
HAYS COUNTY, TX・1 DAY AGO
KXAN

Court documents said between May and July 2021, Eri Gutberto Parra-Lopeza sold over 3,000 tablets of fentanyl to undercover officers in and around the Austin area.
AUSTIN, TX・19 HOURS AGO
KXAN

This is the only scheduled debate between the candidates ahead of election day. They'll meet this Friday in the University of Texas Rio Grande Valley in Edinburg. The debate will last an hour.
AUSTIN, TX・19 HOURS AGO
KXAN