Starbucks’s abortion promises for workers are PR stunts. We want a union contract. 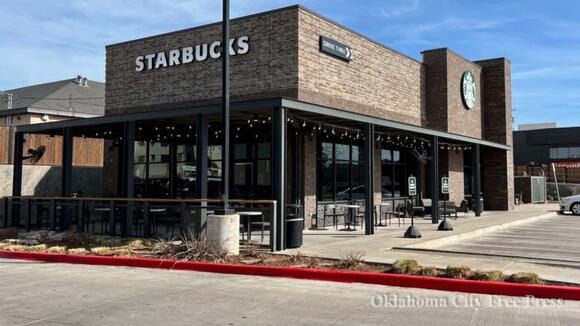 This opinion piece first appeared in Jacobin Magazine. It is by Oklahoma City’s Alisha Humphrey, one of the organizers for the union vote at the 63rd and Grand Starbucks in the OKC metro. They were the first Starbucks crew in Oklahoma to petition for a union vote.

Starbucks is seeking good PR by offering to cover travel costs for abortion and gender-affirming care for workers like me. But its promises come with caveats and can be revoked. We don’t want flimsy promises — we want these benefits in a union contract.

I used to have recurring nightmares of being pregnant and unable to get an abortion. I remember the sickening feeling of those dreams, trapped in a pregnant body I could not escape. Now that Roe v. Wade has been overturned, I can’t shake the thought that my nightmare will be the reality for many — not least in my state of Oklahoma, where the governor has signed the nation’s strictest abortion ban.

In the weeks since the Supreme Court decision, I’ve been inspired to stand up to this injustice by organizing to protect not only myself but all vulnerable people, starting in my workplace of Starbucks. In the face of corporate greed and government indifference, our greatest opportunity for defeating tyranny and ensuring true democracy lies in building a strong, unified, and inclusive labor movement.

In response to the court’s ruling, Starbucks announced new health care benefits, including travel reimbursement for abortion services and gender-affirming procedures for eligible employees. But the announcement was a double-edged sword. Amid a massive wave of Starbucks unionization, the company’s update also noted that “Starbucks cannot make promises or guarantees about any benefits” for employees of unionized stores. This union-busting tactic prompted Starbucks Workers United to file a complaint with the National Labor Relations Board, accusing the company of “threatening employees with loss of benefits” for union organizing.

Following the new benefits update, I contacted our worker resources line on June 29. I asked if my unionizing store in Oklahoma City would be covered by the new benefits announced. After being transferred multiple times, I was told they “had not been advised one way or the other on the topic.” At my store and across the country, Starbucks workers were left confused and wondering if we would be able to access the health care we need.

As their union-busting maneuver drew scrutiny in the press, Starbucks changed course and stated that the benefit will include all eligible workers at unionizing and nonunionizing stores. But like our COVID benefits and protections, which ended long before the pandemic, we have no guarantee that they will be permanent, or that the company will make good on its promises. Nothing is set in stone unless we can make it official by including protections for ourselves in a union contract.

Even after their course-correction, there’s still reason to believe that Starbucks is extending the abortion reimbursement benefit for media attention, not out of genuine care for employees’ well-being. If Starbucks wanted to genuinely express progressive values, why not offer the reimbursement for abortion services to all of its employees? Currently the benefits are only offered to workers who qualify for the Starbucks health care plan, which is inaccessible to many workers due to eligibility requirements. To maintain eligibility, you must work an average of twenty hours a week per three-month period. But workers are not guaranteed to be scheduled twenty hours, leaving our ability to access care in the hands of management.

Likewise, as transgender people’s rights have come under attack in states across the country, Starbucks has sought to present itself as a progressive organization by offering to reimburse employees for travel to receive gender-affirming care. But Neha Cremin, a Starbucks organizer who works at a different store in Oklahoma City, has been open about how Starbucks has subtly leveraged her use of trans benefits to pressure her to stop participating in the unionization effort — even before the announcement of these new benefits. Many trans people choose to work at Starbucks because it’s one of the few companies that offers coverage for trans health care. Neha tearfully shared with me her fears of being fired for unionizing, or even just having her hours reduced. Trans health care benefits also require workers to meet the eligibility quotas to enroll in Starbucks health care.

There is no real protection from discrimination in the workplace for queer and trans workers under federal labor law. In many states, union contracts are these workers’ only means of securing protection. Meanwhile, women in the workplace have been sold the aspirational ideal of “girlboss feminism” as a means to get ahead and achieve equality, but the reality shows that this has been a widespread failure. A few women benefit, while the majority of women are exploited just the same.

As with trans and queer people’s rights, the only systematic way to protect and expand the rights of women in the workplace is to revitalize the labor movement and win inclusive contracts . Of course, it’s not a coincidence that the same states passing antiabortion and anti-trans legislation have already passed anti-labor legislation, including “right to work” laws that make it harder for people to form unions and collectively bargain.

Individual workers have very little power at the workplace and in broader society. Coming together collectively, inside and outside the workplace, is our best bet for protecting ourselves. We can’t rely on corporate benevolence to guarantee our rights, and we don’t want any more media-savvy promises. It’s time for Starbucks to meet us at the bargaining table.

A crane toppled and crashed into the corner of the future home of Oklahoma City TV station News 9 Saturday afternoon. The post Crane crashes into News 9 – Oklahoman building in downtown OKC appeared first on Oklahoma City Free Press.
9 DAYS AGO

There has been a surge in the number of homes used exclusively for short-term rentals, or “homeshares,” affecting housing availability. The post OKC housing availability affected by Airbnb, other homeshares biz appeared first on Oklahoma City Free Press.
OKLAHOMA CITY, OK・15 DAYS AGO

NW Expy to close at Wilshire Wed, Sept 14 from midnight to 5 a.m.