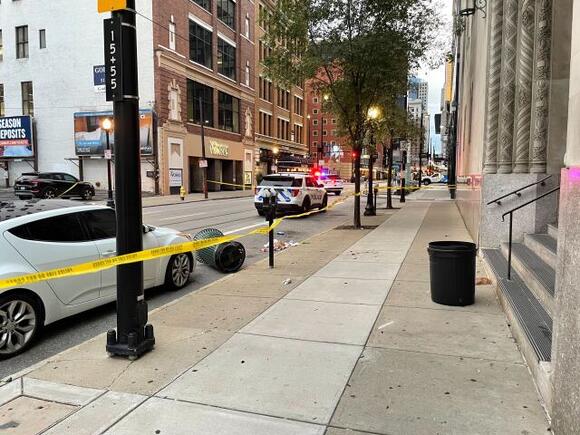 A man is dead and another is in serious condition after an early morning crash in the Central Business District, Cincinnati police said.

45-year-old Adam Sands was driving a 2020 Polaris Slingshot south on Walnut Street with two other passengers — a 42-year-old man and a 37-year-old woman — in the vehicle. While driving, Sands struck a 2019 Ford Fusion operated by a 34-year-old, which was driving west on E 8th Street, police said.

The two passengers in Sands' Slingshot both have serious injuries from the crash and were transported to UC Medical Center. They both remain in serious condition, per CPD.

According to police, Sands was not wearing his seatbelt at the time of the crash.

This crash marks the second fatal crash in Cincinnati involving a Slingshot in 2022. In March, two people were killed on Colerain Avenue after a Slingshot driver lost control, crossed a center line and collided with a pickup truck.

CPD's investigation in the Central Business District crash has found that excessive speed appears to be a factor in the crash, but impairment as a factor is still under investigation.

Watch the Latest Headlines in our 24/7 News Livestream:

Good Morning Tri-State Weekend at 8AM

Another person has died this is the second one this year involving a three wheeled bike cause people want to speed and show off. All people downtown do is speed and run red lights and drive down one way streets sometimes due to impairment but mostly on purpose.

Police said District Three officers responded to 3227 Beekman Street at around 5:30 p.m. for reports of a shooting.
CINCINNATI, OH・23 HOURS AGO
WCPO 9 Cincinnati

Crash in Mt. Airy claims one

Two cars collided when a driver lost control of his vehicle and crossed the centerline. Excessive speed seems to be a factor in the collision.
CINCINNATI, OH・12 HOURS AGO
WCPO 9 Cincinnati

Woman in critical condition after being struck by car in Clifton

The woman was struck by an unknown vehicle on McAlpin Avenue in Clifton around 1:49 a.m. Wednesday. She is currently in critical condition.
CINCINNATI, OH・3 DAYS AGO
WCPO 9 Cincinnati

According to investigators, the woman was hit by a car on McAlpin Avenue just before 2 a.m. Wednesday.
CINCINNATI, OH・3 DAYS AGO

Two inmates escape in Brown County, both back in custody

Two inmates are back in police custody after escaping from the Brown County Jail, according to the Sheriff's Office.
BROWN COUNTY, OH・8 HOURS AGO
WCPO 9 Cincinnati

A 1-year-old girl was killed in a crash involving a pedestrian, according to a report from the Hamilton County Coroner's Office.
HAMILTON COUNTY, OH・3 DAYS AGO
WCPO 9 Cincinnati

Should Cincinnati reconsider speed cameras in response to pedestrian crashes?

While some see the cameras as a controversial way to try and stop speeding, council member Mark Jeffreys said they could be helpful in limiting pedestrian crashes.
CINCINNATI, OH・3 DAYS AGO
WCPO 9 Cincinnati

Two of the four children injured during a West Chester fire last weekend have died, according to a report from the Hamilton County Coroner's Office.
HAMILTON COUNTY, OH・3 DAYS AGO

When officers arrived at the home, they found a lot of blood and dismembered human remains on the first floor.
MIDDLETOWN, OH・3 DAYS AGO
WCPO 9 Cincinnati

Police in Sharonville, Dayton, Springfield, Cleveland, Toledo and Akron all responded to calls of an active shooter inside schools Friday morning. All calls were hoaxes.
SHARONVILLE, OH・1 DAY AGO
WCPO 9 Cincinnati

A 14-year-old boy was arrested on a murder warrant for the shooting death of a 15-year-old boy, Cincinnati police said.
CINCINNATI, OH・4 DAYS AGO
WCPO 9 Cincinnati

Woman charged in August murder of Covington man makes first court appearance. Latoya Dale stood before a judge at the Kenton County Justice Center Thursday and did not enter a formal plea.
1 DAY AGO

Investigators said they responded to the report of a shooting and found a man dead on the steps outside of a home.
HAMILTON COUNTY, OH・4 DAYS AGO
WCPO 9 Cincinnati

Hamilton County's data showed 67% of infant sleep-related deaths were Black babies. More than 60% of infants who died as a result of unsafe sleep had mothers under the age of 30.
HAMILTON COUNTY, OH・2 DAYS AGO
WCPO 9 Cincinnati

The crash took place on I-75 and involved a single rider on the motorcycle who was transported to University Hospital with life-threatening injuries.
FORT MITCHELL, KY・6 DAYS AGO
WCPO 9 Cincinnati

Sergeant Casey Johnson was charged with OVI and vandalism after being involved in a two-car crash. Prior to the crash, Johnson was allegedly involved in an altercation at Ross High School.
HAMILTON, OH・6 DAYS AGO
WCPO 9 Cincinnati

A forensic pathologist from the Hamilton County Coroner's Office is expected to take the stand as the trial of a man accused of murdering eight people in Pike County in 2016 continued Tuesday.
PIKE COUNTY, OH・4 DAYS AGO
WCPO 9 Cincinnati

Top 9 things to do around the Tri-State this weekend

Cool temperatures and fall-like weather is here, but there's still tons around the Tri-State to enjoy.
CINCINNATI, OH・22 HOURS AGO