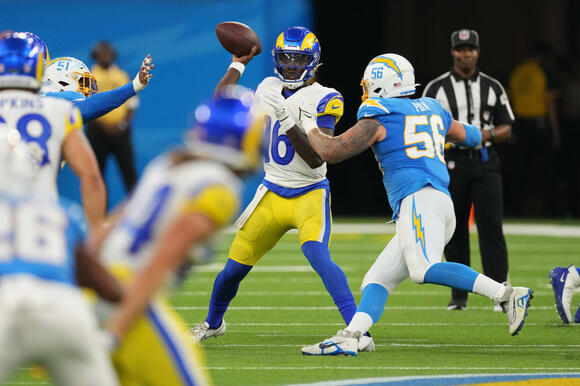 Bryce Perkins showed in Saturday's 29-22 victory against the LA Chargers that he's a more than viable backup quarterback, but do the LA Rams see it that way?

John Wolford may have taken the first-team reps this week with Matthew Stafford sidelined - but Bryce Perkins' performance during their 29-22 preseason-opening win against the LA Chargers might have been enough for him to leapfrog Wolford.

The third-year signal caller was on fire against the Chargers, showing off all of the dual-threat ability he's known for and then some, rushing for a team-high 42-yards, one touchdown , and multiple broken tackles .

But don't think for a second that Perkins is a one-trick pony. He was more than effective through the air, going 10 of 17 for 133-yards, two touchdowns, and zero interceptions. This included a highlight reel-worthy 60-yard dart to wide receiver Lance McCutcheon for a touchdown .

"He's a playmaker," head coach Sean McVay said post-game. "I was just really pleased with Bryce's overall ability to be able to handle all the different situations that came up."

Perkins looked comfortable and accurate, and perhaps most importantly he looked confident in the hot seat.

The question is, does his play warrant being bumped up above Wolford? It might be too soon to tell. But with a short week ahead before the Rams host the Houston Texans on Friday, it's not a long wait to see if Perkins can string together multiple strong performances - and if they feel the need to play Wolford as well as a comparison.

Regardless, Perkins' performance on Saturday was that of a more than viable backup and will surely have general managers league-wide keeping an eye on his progress as a potential trade target.

If Perkins keeps this momentum going, it's hard to imagine he won't be a QB2 somewhere this season.

Los Angeles Rams linebacker Bobby Wagner might've had the most unique tackle of his Hall-of-Fame career on Monday night against the San Francisco 49ers.
NFL・2 DAYS AGO
San Diego Union-Tribune

Despite throwing for 254 yards, Rams quarterback Matthew Stafford tossed a pick-six and lost a fumble en route to a 24-9 loss to the San Francisco 49ers on Monday night.
NFL・43 MINUTES AGO
Yardbarker

Buccaneers OC Byron Leftwich on Cole Beasley retirement: 'It caught me by surprise'

Going into Week 3, the Tampa Bay Buccaneers wide receivers' room was stunningly shorthanded, with Mike Evans serving a one-game suspension and both Chris Godwin and Julio Jones nursing injuries. Longtime slot receiver Cole Beasley was signed to the team's practice squad, ultimately elevated to the active roster and made...
TAMPA, FL・13 MINUTES AGO

Rams Offense Stumped In Loss to 49ers in San Francisco

The Los Angeles Rams offense did not look like itself on Monday Night
SAN FRANCISCO, CA・2 DAYS AGO
RamDigest

Los Angeles Rams linebacker Bobby Wagner has over 1,400 career tackles, but one that won't show up in the stat sheet will stick with him - and the recipient - for some time.
NFL・2 DAYS AGO
RamDigest

Bobby Wagner was arguably the most notable figure for the Los Angeles Rams during their embarrassing loss to the San Francisco 49ers on Monday night.
SAN FRANCISCO, CA・2 HOURS AGO

In the wake of the dangerous Tua Tagovailoa situation, the Los Angeles Rams' shutdown defender believes that the league's priorities are out of sync.
NFL・2 DAYS AGO
RamDigest

Rams OL Coleman Shelton Ruled OUT vs 49ers With Injury

The Los Angeles Rams are down yet another offensive lineman early on against the San Francisco 49ers
SAN FRANCISCO, CA・2 DAYS AGO
RamDigest

The Los Angeles Rams' Super Bowl defense has featured disappointing finales that have doomed them in the early going.
NFL・2 DAYS AGO
RamDigest

WATCH: Rams Pick-Six Issues vs. 49ers Has Been Reoccurring Theme in Past Years

Los Angeles Rams fans might want to look away for this one.
SAN FRANCISCO, CA・1 DAY AGO

Los Angeles Rams quarterback Matthew Stafford has been quite generous to the San Francisco 49ers defense in his four meetings against them since arriving in LA.
NFL・2 DAYS AGO
RamDigest

The veteran wideout signed a three year, $46.5 million contract with the Rams in the offseason.
NFL・2 DAYS AGO
RamDigest

McVay discussed the Rams early offensive struggles and if he believes they can turn things around moving forward.
NFL・1 DAY AGO