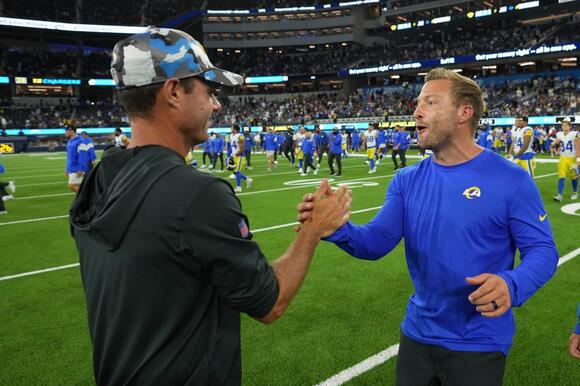 A stellar game for the Rams in their preseason opener saw them take down their crosstown rivals.

Entering the season as the reigning champions and coming off a shorter offseason than other teams, the Rams had little to prove by trotting their starters out. Rather, they would rest several key players in this one, such as quarterback Matthew Stafford, a decision that is likely to carry throughout the rest of the preseason.

While the Rams' stars looked on from the sideline, coach Sean McVay and the Rams would (insert line about final score here)

Now, let's take a look at a few key takeaways from the Rams' preseason opener against the Chargers:

With Stafford not playing in the preseason opener, and likely the preseason overall, it was the Bryce Perkins show for the Rams . He showed flashes of being a serviceable quarterback with his dual-threat ability on full display.

He danced out of two potential sacks to convert a 3rd and 5 while leading the Rams down the field for a touchdown, which was followed on their next drive with a 60-yard strike to receiver Lance McCutcheon to give the Rams a 14-7 lead. He would finish with the game going 10 of 17 for 133 passing yards and two touchdowns while adding 39 rushing yards and a rushing score.

Lance McCutcheon, have yourself a game

It was clear who Perkins' favorite target was, as he consistently targeted rookie receiver Lance McCutcheon out of Montana State. While McCutcheon faces an uphill battle in terms of playing time in a loaded Rams' wide receiver room, Sean McVay has to love what he saw out of the rookie.

He finished the game with 5 receptions for 87 yards and two touchdowns, bringing in both of Perkins' touchdown passes. Averaging an impressive 17.4 yards per reception, McCutcheon showed signs of being a potential steal for the Rams' and a weapon that can be used moving forward.

Defense came up clutch when needed

The Rams' defense in this one had moments of really good play, making life miserable at times for the Chargers' offense. Overall, though, it was not a game to write home about as they allowed the Chargers to put up 312 yards of total offense.

However, when needed, the defense was able to come up clutch. As quarterback Easton Stick was marching the Chargers down the field late in the fourth quarter, it seemed inevitable that they would find the endzone. Enter safety Daniel Isom, who picked off a Stick pass to seal the game, allowing Perkins to take a knee and run out the clock on the Rams' victory .

Former Dallas Cowboys tight end Gavin Escobar has passed away in a tragic rock climbing accident, according to reports. Escobar was one of two climbers found dead on the rockface of a mountainside near Idyllwild in California on Wednesday. He was 31. According to KESQ, a report of "hikers down"...
DALLAS, TX・14 HOURS AGO
iheart.com

----- Miami Dolphins head coach Mike McDaniel said that Tua Tagovailoa was "coherent" and "moving his extremities" before being stretchered off the field during the second quarter of Thursday's (September 29) game against the Cincinnati Bengals, according to Amazon Prime's Kaylee Hartung. ----- Miami Dolphins quarterback Tua Tagovailoa has been...
NFL・14 HOURS AGO
Sports Illustrated

There is nothing but empty seats on the Chase Claypool bandwagon, but let's buy a one-week ticket for this Week 4 matchup versus the Jets.
NFL・27 MINUTES AGO