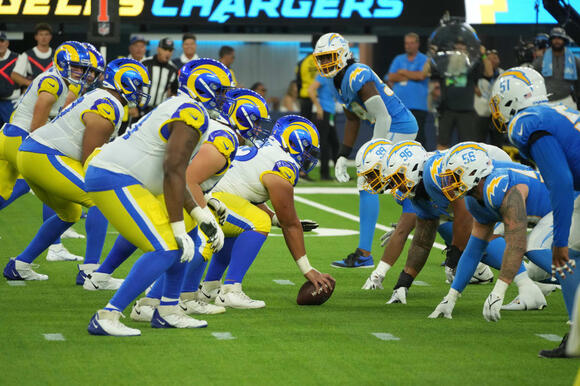 The two LA rivals are all knotted up at halftime.

The Los Angeles Rams are the away team for Saturday's Week 1 preseason matchup with the neighboring Los Angeles Chargers.

But regardless of whose logo is at the center of the field at SoFi Stadium, there's only one defending champion in the building, as coach Sean McVay and the Rams are now officially on the trail toward a repeat with the start of preseason.

Filled with star power on both sides, the Rams are without a handful of starters. On offense, quarterback Matthew Stafford, receivers Cooper Kupp and Allen Robinson, and running back Cam Akers were a few notable inactives, among others.

Bryce Perkins got the start at quarterback for McVay against the Chargers. Last year, in the first three-game preseason in league history, Perkins got three starts and was the only Rams quarterback to play in the final two contests.

Journeyman quarterback Chase Daniel unloaded a bomb to get the scoring started, connecting with receiver Joe Reed for a 41-yard touchdown.

And even without star pass-rushers Joey Bosa and Khalil Mack, the Chargers' d-line got home to Perkins on the Rams' first possession, bringing up rookie punter Cameron Dicker for his first-career boot.

It was more of the same for Dicker on the next possession. But then the Perkins magic happened.

After getting the ball back, Perkins faced a third down and was another failed conversion away from a third-straight punt. Instead, he broke free for an impressive nine-yard run.

The drive ended with running back AJ Rose plunging through the middle for six, making the score 7-7.

But the big plays didn't end there for Perkins and Co. He then found undrafted rookie receiver Lance McCutcheon on a 60-yard touchdown pass that somehow topped the highlight scramble the quarterback pulled off earlier in the quarter.

The Chargers responded with a 10-play, 72-yard drive that saw Daniel toss his second score, this time to receiver Michael Bandy from 16 yards out. The game was now tied 14-14 with 30 seconds remaining.

A game that began slowly for the Rams ended with some firework-filled plays in the second quarter.

Former Dallas Cowboys tight end Gavin Escobar has passed away in a tragic rock climbing accident, according to reports. Escobar was one of two climbers found dead on the rockface of a mountainside near Idyllwild in California on Wednesday. He was 31. According to KESQ, a report of "hikers down"...
DALLAS, TX・9 HOURS AGO
CNN

The Miami Dolphins quarterback Tua Tagovailoa was taken off the field on a stretcher on Thursday during a game against the Cincinnati Bengals, after suffering apparent head and neck injuries -- less than a week after being injured in another game.
CINCINNATI, OH・32 MINUTES AGO
RamDigest

The Los Angeles Rams have refused to let injuries force them to the wrong side of the scoreboard over the last two weeks.
LOS ANGELES, CA・2 DAYS AGO
RamDigest

McVay discussed the dominance of Bosa and the challenge he presents against the Rams' offense.
NFL・9 HOURS AGO

McVay discussed the use of Skowronek at multiple positions and how impactful it is.
LOS ANGELES, CA・2 DAYS AGO