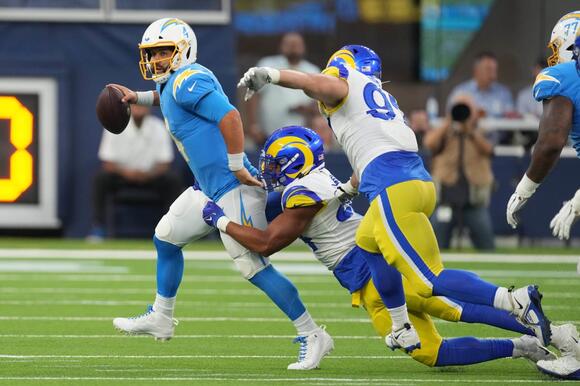 Follow along with RamDigest.com as we keep you up to date on Saturday night's preseason matchup between the Rams and Chargers.

The Los Angeles Rams will enter the season with an even bigger target on their back as they prepare for their Super Bowl defense. They will kick their title defense off with a Week 1 preseason game against the Los Angeles Chargers in what could be a potential Super Bowl preview.

While the Rams kick off their title defense, they will be doing so without most of their starters, opting to keep their guys as fully healthy as possible. Rams fans will likely have to wait until the season opener against the Buffalo Bills to see their starters, including offseason additions linebacker Bobby Wagner and receiver Allen Robinson.

However, there will still be plenty to keep an eye on as the Rams face the Chargers. Starting tight Tyler Higbee will likely not see any action, but the battle for the second spot on the depth chart between Kendall Blanton and Brycen Hopkins will likely continue throughout the preseason.

Second-year receiver Tutu Atwell will also look to make a strong impression in what is likely to be a good amount of playing time. Atwell, who has drawn rave reviews throughout training camp, is looking to contribute wherever he can for the Rams in his second season.

Follow along with RamDigest.com as we keep you up-to-date on each drive and scoring play Saturday night from SoFi Stadium in Los Angeles.

In-game updates will appear below after kickoff...

The Los Angeles Chargers have won the toss and will receive the opening kickoff.

Joshua Kelley came out of the gate hot for the Chargers with a 5-yard carry, 6-yard reception and a 6-yard carry. Coming back in on a 3rd and 6, Kelley would bring in an 11-yard reception to move into Rams' territory.

TOUCHDOWN CHARGERS : Quarterback Chase Daniel connected with receiver Joe Reed on a 41-yard strike to give the Chargers the lead. Dustin Hopkins extra point is good to give put the Chargers up 7-0 with 11:09 left in the first quarter. The drive went 77 yards in 9 plays, taking 3:51 off the clock.

- Rams began their first drive at their own 15.

The Bryce Perkins show is in full effect early, with the quarterback showing off his arm talent as well as his dual threat ability, including a run of 7 yards and a 10-yard completion to running back Jake Funk.

A promising drive stalled out as on 3rd and 7, Bryce Perkins was sacked for a loss of 10 yards. Cameron Dicker would boot a 58-yard punt for a touchback.

- Chargers took over from their own 25 following the touchback.

The Rams' defense came back out and kept the Chargers' offense in check, only allowing a pair of Chase Daniel receptions for 6 yards and two yards, forcing a three and out.

- The Rams will take over at their own 18 following the Chargers' punt.

The Rams picked up a big chunk of yardage on their first play as an Asante Samuel pass interference nets them 24 yards.

Looking for tight end Brycen Hopkins on 3rd and 12, Perkins' pass fell incomplete and the Rams' offense fails to take advantage of the pass interference.

- A 49-yard punt from Dicker will have the Chargers start their drive at their own 14.

A 9-yard sack from defensive lineman Bobby Brown III and near pick six at the hands of cornerback Derion Kendrick see the Chargers go three and out.

- Kick catch interference will see the Rams start at the Chargers 47.

The Rams got a pair of rushes off for 3 and 2 yards by running back Jake Funk to end the first quarter.

Perkins started off the second quarter by dancing out of two potential sacks to rush for 9 yards to convert a 3rd and 5.

Perkins continues to use his legs, reeling off scrambles of 3 and 5 yards to keep the drive alive.

TOUCHDOWN RAMS : Asim Rosep plunges in from 1-yard out to get the Rams on the board. Cameron Dicker put the extra point through to tie the game at 7-7 with 7:44 left in the second quarter. The drive went 47 yards on 13 plays, taking off 8:39 from the clock.

- The Chargers will start their drive at their own 23.

The Rams defense continues to stifle the Chargers' offense following the opening drive as they force yet another three and out.

- The Rams will start their drive at their own 36.

TOUCHDOWN RAMS: Perkins connects with Lance McCutcheon for a 60-yard touchdown pass. Dicker's extra point attempt is good to give the Rams a 14-7 lead with 5:17 left in the second quarter. The drive went 64 yards on 3 plays and took :57 off the clock.

- The Chargers will start their drive at their own 28.

Chase Daniel finds a hole in the Rams' defense for a 22-yard rush to convert on 3rd and 7.

Isaiah Spiller enters for the Chargers at running back and reels off runs of 4, 6 and 4 yards respectively, moving deeper into Rams' territory.

TOUCHDOWN CHARGERS: Daniel finds receiver Michael Bandy for a 16-yard passing touchdown. James McCourt puts the extra point through to tie it 14-14 with :37 left in the second quarter. The drive went 72 yards on 10 plays, taking 4:40 off the clock.

- The Rams start their drive at their own 24.

The Rams elect to run the clock out following 4-yard rush from Trey Ragas, taking this one to halftime.

- The Rams will start their drive at their own 25.

Perkins continues to use his legs, scrambling for 11 yards on a 1st and 10 to get a Rams' first down.

A Perkins interception is wiped off the board due to a Chargers' pass interference call, giving the Rams the ball at the Chargers' 5-yard line.

TOUCHDOWN CHARGERS : Perkins keeps it himself for a 1-yard touchdown run. Perkins connects with McCutcheon on the two-point conversion to give the Rams the 22-14 lead with 8:17 left in the third quarter. The drive went 75 yards on 10 plays, taking 6:43 off the clock.

- The Chargers will start their drive at their own 25.

Fullback Zander Horvath takes a carry for two yards to convert on 4th and 1, keeping the Chargers' drive alive.

Easton Stick with back-to-back completions of 11 and 6 yards to Bandy to put the Chargers into the Red zone.

The Chargers will start the fourth quarter threatening to score with the ball on the Rams' 18-yard line.

TOUCHDOWN CHARGERS : Stick keeps it himself for a three-yard rushing touchdown. Stick two-point conversion attempt to tight end Hunter Kampmoyer ties it 22-22 with 13:02 left in the fourth quarter. The drive was 75 yards on 18 plays, taking 10:15 off the clock.

- The Rams will start their drive at their own 25.

A Perkins falls incomplete but a defensive pass interference moves the ball to the Chargers' 38-yard line.

TOUCHDOWN RAMS : Perkins connects with McCutcheon again for an 11-yard touchdown pass. Dicker's extra point is good, putting the Rams ahead 29-22 with 6:11 left in the fourth quarter. The drive went 75 yards on 11 plays, taking up 6:51 of game clock.

- The Chargers will start their drive at their own 25.

The Rams' defense gets to Stick on 3rd and 4 for a sack, forcing the Chargers into a three and out.

- Following the punt the Rams will start their next drive at their own 25.

The Chargers would answer by forcing a three and out of their own from the Rams.

- The Chargers will start their next drive at their own 16 following a block in the back penalty.

Stick connects with Reed for a crucial eight-yard reception to convert on 3rd and 5, keeping the Chargers' drive alive into the two minute warning.

INTERCEPTION RAMS : Daniel Isom picks off Stick to seal the game for the Rams.

Perkins kneels the ball and the Rams close out the win.

As the Los Angeles Rams prepare to take on the San Francisco 49ers in Week 4 of the 2022 season, Ram Digest highlights three players on whom Rams fans might want to keep watch.
SAN FRANCISCO, CA・1 DAY AGO
RamDigest

How Are Rams Preparing for 'Elite' 49ers Weapon Deebo Samuel?

Morris had plenty of praise for Lewis, who has taken a big step forward in the Rams' defense this season.
LOS ANGELES, CA・2 DAYS AGO
RamDigest

SKYLIGHTS 2022: Here are the games we’re covering for Week 6