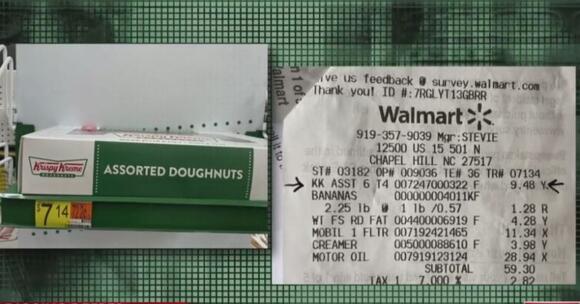 RALEIGH, N.C. (WNCN) — There’s been a huge increase in the number of stores charging the wrong prices at the register according to those who are in charge of checking to make sure you pay the right price.

When you buy an item, you want to make sure you’re paying the price listed on the shelf.

“With prices going up on so many items across the board you certainly don’t want to pay more than you should or have to,” said shopper Chris Baker.

Turns out this store has been repeatedly flagged by the state agency that checks for prices lining up with those on the shelf.

Another inspection took place in February 2021. During that check, the store passed.

In April 2022, the weights and measures division of the North Carolina Agriculture Department received another consumer complaint about that superstore.

The division went back to check prices — and the store failed again. A follow-up inspection in June resulted in yet another failure.

Now, weights and measures officials say the store is scheduled for another reinspection at the end of August.

CBS 17 Consumer Investigator Steve Sbraccia contacted Walmart corporate officials to find out what it is doing to rectify these issues.

In an email, Walmart spokeswoman Ashley Nolan said, “We are testing an enhanced electronic shelf labeling initiative and improved handheld app capabilities to help associates with price confirmation and adjustment when needed.”

But weights and measures says the problem is bigger than just one Walmart store.

“Inflation is causing the prices to go up and staffing problems mean they can’t get around to change the shelf prices as quickly as they need to,” said Chad Parker, the measurement section manager of the North Carolina Agriculture and Consumer Services Department’s Weights and Measures Division.

As evidence of that, Parker said fines for incorrect prices have jumped from an average of $50,000 annually to more than $500,000 in the last year.

The problem is so bad, Parker said his people can’t keep up with it.

“Our workload with failed scans has increased by 1000 percent in the past year,” said Parker. “We don’t have the manpower to keep up with a 1000 percent increase in that area.”

So, you have to be your own advocate.

Keep track of the prices on your receipt. If you find an error bring it to the store’s customer service personnel for a refund and notify the state weights and measures division.

Then I would have to say, the price in the computers at the registers shouldn't change until prices have been confirmed to have be updated on the shelves, period!!!

went to buy an air mattress shelf price was 74.98 at the register 97. why should customers pay for a business' mistake? For Walmart to be a corporate store. they're slacking.

I have found these price glitches in walmart a few times. I call CS and they either issue my funds back or send me an e gift card...

A Florida sheriff's deputy working an overnight shift to provide safety at a construction zone was struck and killed by a worker operating a front end loader who is in the U.S. illegally, officials said Friday.
PINELLAS COUNTY, FL・1 DAY AGO
WSPA 7News

Two days after Rebecca Gillespie was injured after being hit by a falling cell phone, she’s back in the hospital.
OKLAHOMA CITY, OK・1 DAY AGO
WSPA 7News

Killer in the Carolinas: Lingering questions after confession

"She knows I love animals; she knows I love cats," said Jones. "And she told me when she got it that she thought of me. And now, when I look at it, I think of her."
RUTHERFORD COUNTY, NC・2 DAYS AGO

Why there is a billboard advertising California abortion services in SC

About a half mile away from the South Carolina State House in downtown Columbia, there is a billboard promoting abortion services available on the other side of the country.
CALIFORNIA STATE・23 HOURS AGO
WSPA 7News

A wanted woman has been arrested in Louisiana on Thursday following the death of a man in Union County.
UNION COUNTY, SC・2 DAYS AGO
WSPA 7News

SPARTANBURG, S.C. (WSPA) – Whether you want to pick pumpkins or apples or take a hay ride or walk through a corn maze, there are plenty of fall activities for the family. Anderson County Denver Downs Farmstead is located at 1515 Denver Road. It provides a corn maze, pumpkins, music and more. All the fun […]
ANDERSON COUNTY, SC・2 DAYS AGO

Historic house to be preserved and turned into museum

Years of history and stories are woven into the walls and rafters of this Piedmont house.
PIEDMONT, SC・1 DAY AGO
WSPA 7News

Alabama called off the execution of Alan Miller after difficulty accessing the inmate's veins.
ALABAMA STATE・1 DAY AGO
WSPA 7News

Two flights of migrants to Martha’s Vineyard have elicited uproar on the left and among immigration advocates.
FLORIDA STATE・2 DAYS AGO
WSPA 7News

Where to see fall colors in South Carolina

CHARLESTON, S.C. (WCBD)- Thursday marked the Autumnal Equinox–when the sun is directly above the Equator and day and night are of equal length–which signifies the first day of Fall. Fall ushers in chillier temperatures, shorter days, and a phenomenon that is synonymous with the season: the leaves changing color. Beginning in late September, leaves shed […]
TRAVEL・1 DAY AGO

US Supreme Court says Alabama can carry out execution

A divided U.S. Supreme Court said Alabama can proceed Thursday night with the lethal injection of an inmate convicted in a 1999 workplace shooting, vacating two lower court rulings that sided with the condemned man and his request for a different method of execution.
ALABAMA STATE・1 DAY AGO
WSPA 7News

In South Carolina, there is a mental health screening tool right at your finger tips.
MENTAL HEALTH・2 DAYS AGO
WSPA 7News

Two U.S. military veterans who disappeared while fighting Russia with Ukrainian forces have been released after about three months in captivity, relatives said Wednesday.
ALABAMA STATE・3 DAYS AGO
WSPA 7News

Gov. McMaster signs bill aimed at keeping some children out of foster care with strangers