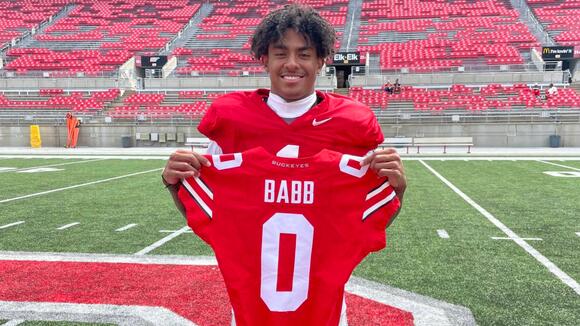 Babb is viewed as the player who best exemplifies the traits of late All-American and national champion Bill Willis.

“It’s an honor to have this number attached to my name,” Babb said. “With it comes the responsibility to lead this team any way I can.”

The Block “O” jersey is awarded annually in honor of the late defensive end Bill Willis , who was an All-American and national champion during his career with the Buckeyes from 1942-44.

His No. 99 was retired in 2007, but the program decided to further honor his legacy by presenting the No. 0 to a player who displays the values he did, including accountability, character and toughness.

Defensive end Jonathon Cooper and offensive lineman Thayer Munford were the first two recipients of the Block “O” jersey, but neither had to overcome the same on-field struggles as Babb to get to this point.

In fact, the St. Louis native missed his entire freshman, redshirt freshman and redshirt junior seasons at Ohio State with separate ACL injuries. But now back to full strength, he’s on track to contribute for the Buckeyes this fall.

“The last five years have been a long journey,” Babb said. “There were times when I was down and had a lot of questions, but God put people in my life who wouldn’t let me give up, and it’s been a blessing. I couldn’t have done this without them.

“I’ve learned that you can’t get through tough times all by yourself. You have to grab onto someone. I hope everyone sees that. I love this team and I can’t wait to go on this journey that’s ahead of us.”

Photo courtesy of The Ohio State Dept. of Athletics.

The Buckeyes face their first road test of the season when they travel to East Lansing on Saturday.
COLUMBUS, OH・3 HOURS AGO
BuckeyesNow

Multiple factors influence betting outcomes, but this notable stat is starting to become a trend regarding Ohio State's ability to cover.
COLUMBUS, OH・10 HOURS AGO
BuckeyesNow

"Something I’ve been working on is just moving on to the next play, getting it out of my head and focusing on the 'next-play mentality.'"
COLUMBUS, OH・38 MINUTES AGO
BuckeyesNow

Here's a behind the scenes look at what's going on with the Spartans football program during their 3-game losing streak.
COLUMBUS, OH・13 HOURS AGO

"Whether you come to Ohio State or not, I have to clear my chest because I had the wrong impression of you."
COLUMBUS, OH・1 DAY AGO
BuckeyesNow

"He hasn’t had some of the big runs that he had last year, but he’s still doing some good things."
COLUMBUS, OH・1 DAY AGO
BuckeyesNow

The Buckeyes have won six straight against the Spartans and haven't lost in East Lansing since 1999.
COLUMBUS, OH・1 DAY AGO
BuckeyesNow

Ohio State Moves Up To No. 2 In SI All-American’s 2023 Recruiting Rankings

The Buckeyes benefitted from Texas and Notre Dame suffering key decommitments in the month.
COLUMBUS, OH・11 HOURS AGO

Johnson has raised more than $10,000 through his foundation to assist veterans, student-athletes and the homeless.
COLUMBUS, OH・2 HOURS AGO