Rams vs. Chargers Preseason: Impactful Rookies, How to Watch 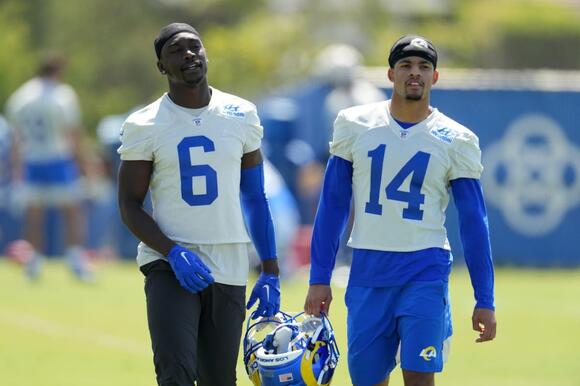 The Rams and Chargers kick off from SoFi Stadium on Saturday in the first of three preseason games for each team as the NFL regular season draws closer.

The Los Angeles Rams' quest for back-to-back Super Bowl wins begins (kind of) on Saturday as they face the in-town rival Chargers for the first preseason game for each team.

The Rams' roster is slightly different from their championship team of a year ago, as free agents and rookies introduce themselves in the locker room and take over for stars from last season like Von Miller, Andrew Whitworth, and Odell Beckham Jr.

The 5-10, 183-pound Durant has caught McVay's attention . "He made some plays even in the spring that stood out where you can see he's a great competitor, even when you watch his film," said McVay. "Similar to what I was mentioning about (Derion Kendrick) the other day. He just got a great play swagger. He's getting more and more comfortable."

Quarterback Matthew Stafford, who underwent an elbow procedure this offseason , will not play.

"I'm just going through something that is irritating at the moment but I'm working through it," Stafford said. "We've got a great plan. I'm feeling stronger every time I come out here and throw.

"I felt like I could make any throw I wanted to today. I’m just trying to be smart when I get those opportunities to make sure I can come out here, cut it loose, turn it loose like I did today and go from there.”

Make sure to follow along with in-game updates as they happen with RamDigest.com .

Want the latest in breaking news and insider information on the Rams? Click Here to sign up for the Ram Digest Newsletter

Rams vs. Cardinals Week 3: How to Watch, Betting Odds

The Rams travel east to meet the division rival Arizona Cardinals at State Farm on Sunday. Here's how to watch and listen, and betting lines.
NFL・1 DAY AGO
RamDigest

Rams Coach Sean McVay spoke to the media on Wednesday afternoon, revealing his thoughts on Matthew Stafford's interceptions, game planning for the Cardinals, Bobby Wagner's impact, and much more.
NFL・2 DAYS AGO
RamDigest

The Rams have dominated the Cardinals since coach Sean McVay took over in 2017.
NFL・2 DAYS AGO