Rams Coach Sean McVay: 'We've Got to Be More Efficient Running the Ball' 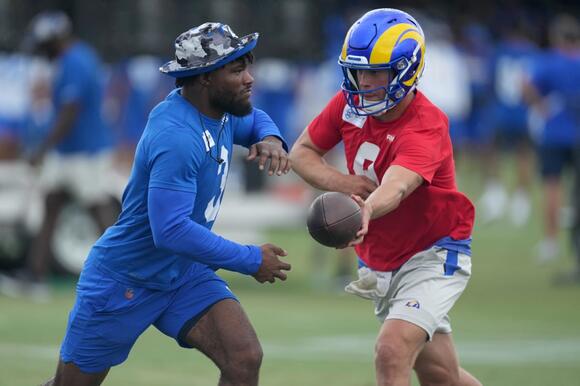 McVay discussed the importance of improving the Rams' run game ahead of the season.

While the Los Angeles Rams were able to claim the Lombardi Trophy after their Super Bowl LVI victory, they did so as a mostly one-dimensional offense for most of the season.

With quarterback Matthew Stafford and superstar receiver Cooper Kupp leading the way, the Rams offense was still one of the best in the league, despite any consistent run game. The Rams would finish the regular season ranked 5th in rushing yards, 28th in rushing touchdowns and 25th in yards per carry.

Simply put, they could not move the ball on the ground. Yes, that worked last season but Rams coach Sean McVay acknowledged how crucial a strong running game is for an offense to be successful in the NFL.

“It’s been a big point of emphasis because we’ve got to be more efficient running the football,” McVay said on SiriusXM NFL Radio recently. “You’d love to be able to create the explosives but I think just the snap-in and snap-out efficiency."

"Obviously, the last game we played, credit to Cincinnati, but really throughout the playoffs – with the exception of the Arizona game – we didn’t run the football very well.

In the Rams' playoff run, even after getting running back Cam Akers back from an Achilles injury that kept him out for most of the regular season, their run game was still not largely productive.

Against Arizona the run game appeared to show signs of life as the Rams rushed for 140 yards in the victory. However, the run game would shore up quickly over their next three playoff games. In their next three games they would rush for just 186 yards on 82 yards, averaging a meager 2.3 yards per carry.

However, the Rams should benefit from a fully healthy Cam Akers entering the season. Beyond whoever lines up in the backfield though, it is crucial that the offensive line also gels and creates running lanes for Akers and the rest of the Rams' running backs.

"Whether it’s Cam Akers, Darrell Henderson, we feel really good about those guys," McVay said. "Then continuing to figure out with our five linemen up front, Tyler Higbee at tight end, Kendall Blanton, Brycen Hopkins, what are the things and concepts we can activate that put them in the right spots."

The passing attack will remain potent for the Rams this season, especially with the addition of receiver Allen Robinson alongside Kupp for Stafford to work with. Even then, the run game picking it up will alleviate as much pressure off of Stafford as possible, and McVay admits that they know improving the run game is essential.

"It’s not lost on us that we didn’t run the football good enough," McVay said. "We’ve got to continue to get better in that area, and then continue to maintain a high level of execution in the pass game also.”

It is unlikely that the Rams' offense just completely falls off a cliff, especially with Stafford at quarterback and a plethora of receiving threats to work with. However, as they look to repeat as Super Bowl champions, adding an efficient run game will take their offense to the next level and make them almost unstoppable.

Thanks to a strong effort from the Los Angeles Rams' offense, a career-high 58 passes from Kyler Murray yielded no touchdowns.
NFL・18 HOURS AGO
RamDigest

Rams vs. Cardinals: Which Uniform Combination Will Los Angeles Wear?

The Los Angeles Rams will be wearing a familiar jersey concept in Sunday's game against the Arizona Cardinals, but with a change in the combination from the last time it was in action.
LOS ANGELES, CA・1 DAY AGO
RamDigest

The Los Angeles Rams nonexistent run game needs to improve against the Cardinals. Can Malcolm Brown help?
NFL・1 DAY AGO

Watch: Rams Release Hype Video Ahead of Matchup vs. Cardinals

The Los Angeles Rams won their second consecutive game after taking care of business against the Arizona Cardinals in Week 3.
NFL・19 HOURS AGO