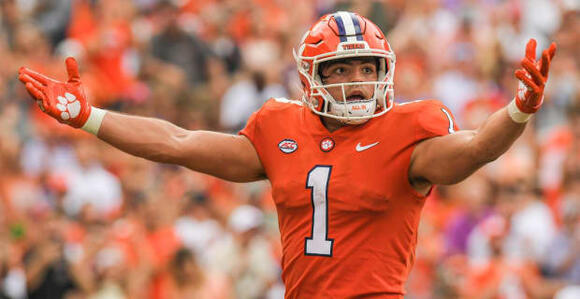 Clemson had a down year last season, but that hasn't kept the school from starting near the top of most preseason top 25 college football rankings.

That is, except for one voter who cast his ballot in the first AP Top 25 poll.

Brett McMurphy of Action Network released his personal preseason ballot, revealing that he didn't include presumptive ACC favorite Clemson in his top 10.

McMurphy ranks Clemson as the No. 11 team in college football coming into the preseason, behind No. 10 Baylor and ahead of No. 12 Oklahoma State.

The other AP Top 25 voters were more generous, naming Clemson as the No. 4 team in college football in the official preseason rankings .

Other teams that came ahead of Clemson in McMurphy's top 25 poll include ACC rivals NC State at No. 9 and notably Miami coming in at No. 4.

Both are on Clemson's schedule this football season and each at home in Memorial Stadium, though the Tigers do travel to Wake Forest and Notre Dame.

Notre Dame clocked in at No. 5, just behind the Tigers.

Clemson finished 10-3 a year ago with losses to eventual College Football Playoff national champion Georgia and on the road to NC State and Pitt, all by a combined 23 points.

It marked the first time in six straight years that Clemson failed to win the ACC or make the playoff.

Do preseason rankings matter? Not to Dabo

Head coach Dabo Swinney isn't a fan of preseason rankings of any kind.

"It’s just something to talk about right now. It doesn’t have anything to do with December or November," he said recently.

"All that will be determined by what happens on the field, kind of like those recruiting rankings. They do that re-rank every year — somebody does it — and very seldom have we not been ranked higher four years later than we were when we signed ’em.

"That’s all based on performance and not potential. I think we’ve got a chance to be a good team, but we’ve got a lot of work to do."

But the early Top 25 is relevant

Swinney may not prefer to give preseason football rankings much credence, but history suggests they do have an effect on which teams make the CFP.

In the 21st century, only two teams that debuted at No. 1 finished as national champions — USC in 2004 under the old BCS system, and Alabama in 2017, the only team in the College Football Playoff era to do it.

But going over recent preseason polls shows that teams that went on to win the national championship have started in one particular spot: all but one — LSU, which started No. 6 in 2019 — debuted in the preseason AP top five.

Good news, in theory, for No. 4 Clemson coming into this season.

Alabama!!! Go get them 👏 if they loses 😤 yes they calls out all top Colleges 😉..I stop watching pros over paid cry babies. I got to keep up with the Colleges they makes football. It should stop here.

A pair of Big 12 rivals meet as the newly ranked Kansas State hosts Texas Tech in college football's Week 5 action on Saturday. Both are coming off statement wins last weekend: Texas Tech, in an overtime victory over Texas; and Kansas State, in its 3rd of the last 4 against Oklahoma. What do the ...
LUBBOCK, TX・2 DAYS AGO
College Football HQ

Texas A&M wide receiver Ainias Smith will miss the rest of the 2022 college football season with a lower body injury he suffered on Saturday. Smith sustained the injury during the No. 17 ranked Aggies' two-point win over No. 20 Arkansas over the weekend. Smith was blocking downfield on a play ...
COLLEGE STATION, TX・2 DAYS AGO
College Football HQ

Week 5 of the college football season is set to kick off with more teams opening up their conference schedule and taking that important first step in the jockey for league standings and playoff consideration. This weekend, that will include five games featuring head-to-head matchups with both teams ...
COLLEGE SPORTS・1 DAY AGO
College Football HQ

When the College Football Playoff rankings will be announced

Rankings make or break teams in college football.  And while the AP Top 25 rankings and Coaches Poll help us understand where the top teams stand up to now, the one that really matters is the official College Football Playoff poll created by the committee. Here's a look at the CFP committee's ...
COLLEGE SPORTS・1 DAY AGO