‘I’d love it to keep going for another 75 years’: Santa Fe Importers celebrates its diamond anniversary

Vincenzo Passanisi immigrated to the United States in 1921 at 18 years old, moving from Sicily to Buffalo, New York, where he opened a market. Chasing the weather of his childhood and to be near relatives, he moved his family of eight across the country in a small car—mostly along Route 66—to Long Beach, where he opened a deli, Santa Fe Importers, in 1947.

For 75 years and under three generations of the Passanisi family, the deli and market at 1401 Santa Fe Ave. has thrived and expanded in what is now Long Beach’s Westside.

“We’re just continuing to try to serve our customers as best we can,” current President Vincent Passanisi, who is named after his grandfather, said. “Give them good value, good food and large portions.”

In the early days of the business, Vincent said the area was residential, as opposed to its industrial and commercial state of today. The neighborhood was home to many immigrants, he said, including Poles, Greeks and Italians.

This was the customer base that helped shape the business and its focus on imported pastas, cheeses, olives and meats.

“Over time, as the neighborhood changed, we evolved,” he said. “We started making sandwiches and meals to go.”

Customer favorites include the meatball sandwich (discounted on Meatball Mondays) and manicotti, which are traditionally stuffed pasta tubes, but Santa Fe Importers makes an old Passanisi recipe that is more crepe-like. 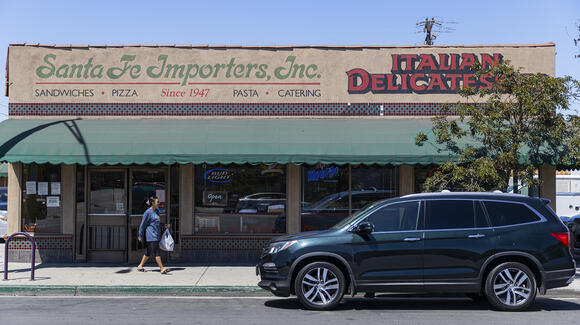 A customer walks out of Santa Fe Importers, which is celebrating its 75th anniversary, Thursday, Aug. 11, 2022. Photo by Brandon Richardson.

As the city grew, the deli and market continued to sell a large variety of Italian groceries, but the business also expanded in the early 1950s to include a manufacturing facility that produces meatballs, salamis and sausages. Santa Fe Importers sells its meats to distributors nationwide, meaning many people are enjoying the Long Beach product without even knowing it.

But the Westside staple also deals directly with local businesses, including Domenico’s in Belmont Shore and Modica’s Deli in Downtown, among others.

Vincenzo operated the business until he died in 1968. His son John took the helm and steered the ship for three decades. During his time as owner, John’s kids, including the young Vincent, helped around the shop during summer and other school breaks.

When it came time for John to retire in the late 1990s, he reached out to his four kids to see who, if any, wanted to take over the family business as the third-generation owner. A high school English teacher in Williamsburg, Virginia, at the time, the younger Vincent answered the call and moved his family of five back to the West Coast.

“I think my wife’s still unhappy that I moved us back,” Vincent joked. “No, Long Beach is cool, it’s a great city. My whole family loves it.”

He now lives just over the San Gabriel River in Seal Beach but said he is always finding new things in Long Beach to enjoy, including a recent Gondola Getaway ride he and his wife took for their 30th wedding anniversary.

Vincent’s sister, Marisa, also joined the company around the same time as vice president of sales and marketing.

Santa Fe Importers further diversified its business in 2006 when it acquired XLNT Foods, one of the oldest Mexican food companies in Southern California, this year celebrating 128 years. The brand’s beef tamales and chili con carne—in their iconic red, white and blue packaging—are sold at grocery stores throughout the region and across the country via an online store . 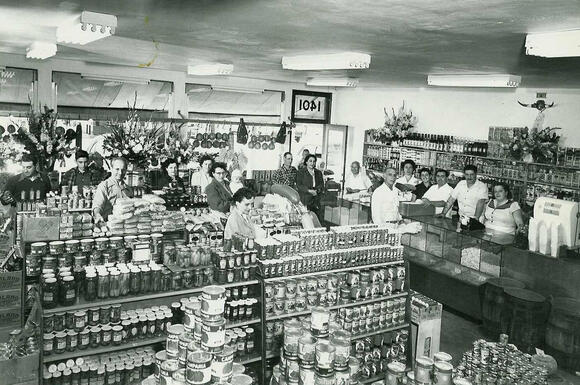 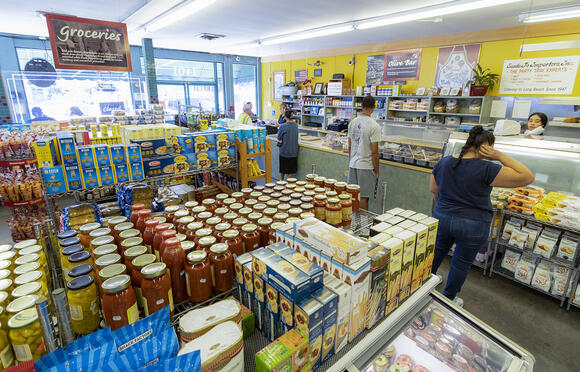 Customers place their orders and are rung up at Santa Fe Importers on the Westside Thursday, Aug. 11, 2022. Photo by Brandon Richardson.

“We opened up the Seal Beach location in 2007 as the economy crashed,” Vincent said. “I’m shocked that we made it through that, but somehow we did.”

For all businesses, the COVID-19 pandemic also was a challenging time, and Santa Fe Importers was no different. The company’s manufacturing business dried up as distributors stopped placing orders and restaurants shuttered for months on end. The deli business also slowed down, though takeout business remained fairly steady in large part due to nearby port operations.

The XNLT arm of the business was Santa Fe Importers’ saving grace, increasing almost fourfold and picking up the slack for the other two areas, Vincent said.

After years of expansion and weathering numerous economic downturns, Santa Fe Importers is thriving once again, Passanisi said, with about 70 employees.

To celebrate its 75th year, the old-school company launched a new website in February and expects to offer online ordering before the end of the year. Santa Fe Importers has anniversary merchandise, including T-shirts, a coffee mug and a hat, for sale on its website and in store. The company also will have giveaways and contests in the coming months.

Adding to a year of celebration, on Aug. 7, the company was honored by the nonprofit Long Beach Heritage as one of the organization’s first 10 Long Beach Legacy Businesses, an honor reserved for long-standing local businesses.

The company’s success has less to do with the family than its loyal customers, Vincent said. Because of that, he said the Santa Fe Importers is dedicated to being an active member of the community through sponsoring sports teams, organizations and events.

Vincent’s favorite tie to the community, however, is hearing personal stories about how someone’s parents brought them to the deli when they were young and now, as adults themselves, bring their own kids to share in that childhood experience.

“Food binds people together, it’s communal. It’s those experiences that keep bringing people back,” Vincent said. “I’d love it to keep going for another 75 years.”

“It depends on my family and what my kids want to do,” he added. “But I’d definitely love to keep this tradition going.”

Prost! Where to celebrate Oktoberfest in Long Beach

You can swing something nice on the sand, or close enough to track it into your home, for less money than the median single-family house price in Long Beach, which is now a bit over $800,000. The post For more affordable beachfront living consider the condo—again appeared first on Long Beach Post.
LONG BEACH, CA・1 DAY AGO
Long Beach Post

With its new farm, Heritage aims to pair fine food and an environmental mission

Heritage Sandwich Shop and its fine-dining companion operate with a zero-waste ethos in mind. So, what does that actually look like? The post With its new farm, Heritage aims to pair fine food and an environmental mission appeared first on Long Beach Post.
LONG BEACH, CA・2 DAYS AGO
Long Beach Post

The first 100 customers will receive a gift card worth anywhere from $5 to $500. The post City’s 4th Grocery Outlet location to open Thursday with giveaways appeared first on Long Beach Post.
LONG BEACH, CA・1 DAY AGO

Millions of dollars have poured into the mayoral race; here’s where it’s coming from

The current race to be mayor of Long Beach is shaping up to be the most expensive in city history. The post Millions of dollars have poured into the mayoral race; here’s where it’s coming from appeared first on Long Beach Post.
LONG BEACH, CA・1 DAY AGO
Long Beach Post

The city did away with one of its last remaining mask mandates today, replacing it with a series of recommendations based on state and CDC guidelines. The post Long Beach lifts mask requirement on public transit, airports appeared first on Long Beach Post.
LONG BEACH, CA・4 DAYS AGO

The Awaida family was well known for their giving nature and selfless volunteer work before a young driver hit and killed them while they walked home on Halloween 2019. The post Community paints mural to honor family killed by drunk driver at Los Cerritos Park appeared first on Long Beach Post.
LONG BEACH, CA・3 DAYS AGO
Long Beach Post

Ian and Qiana Mafnas say complicated regulatory issues have stifled them from opening a restaurant for their popular barbecue, but they're not giving up. The post Axiom Kitchen wants to bring Texas smoked barbecue to Long Beach appeared first on Long Beach Post.
LONG BEACH, CA・6 DAYS AGO
Long Beach Post

The City Council on Tuesday is expected to reject an appeal of the city’s decision to allow an operator at the Junipero Beach concession stand to sell alcohol. The Planning Commission voted in July to grant Saltwater Deck, which has operated the Junipero Beach concession stand since 2021, a conditional use permit to sell beer, wine, champagne and wine-based cocktails.
LONG BEACH, CA・6 HOURS AGO
Long Beach Post

Column: I almost died getting to the city’s ‘open streets’ event on my bike

The Beach Streets event proved once again how many people are just waiting for the chance to ditch their cars; it also shows how dangerous our streets really are any other day when cars reign supreme. The post Column: I almost died getting to the city’s ‘open streets’ event on my bike appeared first on Long Beach Post.
LONG BEACH, CA・7 DAYS AGO

Nothing was taken from the restaurant, and police ultimately classified the crime as vandalism, but business owners say they've been frustrated by the rise in break-ins across Long Beach. The post Smashed door at Lola’s on Retro Row is the latest break-in amid a rise in commercial burglaries appeared first on Long Beach Post.
LONG BEACH, CA・4 DAYS AGO
Long Beach Post

The property sold for nearly $51 million earlier this year. Now, the city's Planning Commission is slated to consider the redevelopment proposal during its Oct. 6 meeting. The post North Long Beach industrial property to be redeveloped into large warehouse appeared first on Long Beach Post.
6 DAYS AGO
Long Beach Post

It is not clear whether Long Beach, which has its own health department, will follow suit. The city still requires masks to be worn in transportation hubs as of the most recent update to its health order in April.  The post LA County to lift mask requirement for indoor transit and airports appeared first on Long Beach Post.
LOS ANGELES COUNTY, CA・5 DAYS AGO
Long Beach Post

Local artists are throwing open their doors to the public, allowing a rare and intimate look at their creative spaces on weekends through the month of October. The post Check out the studios of more than 60 local artists in October with Long Beach Open Studio Tours appeared first on Long Beach Post.
LONG BEACH, CA・8 DAYS AGO
Long Beach Post

Carroll Park is one of the city’s earliest historic districts, and, today, much of the neighborhood remains largely unchanged since its early days. The post A 1910 historic Carroll Park jewel on the market for $1.25 million appeared first on Long Beach Post.
LONG BEACH, CA・8 DAYS AGO
Long Beach Post

The Institute for Justice sent a letter to city officials Monday warning that the direction given by the City Council in August to “strike a balance” between physical restaurants and food trucks in the city could be seen as “protectionism,” which the firm said has been upheld in federal courts as unconstitutional. The post Law firm warns that Long Beach’s new food truck law could be unconstitutional appeared first on Long Beach Post.
LONG BEACH, CA・8 DAYS AGO