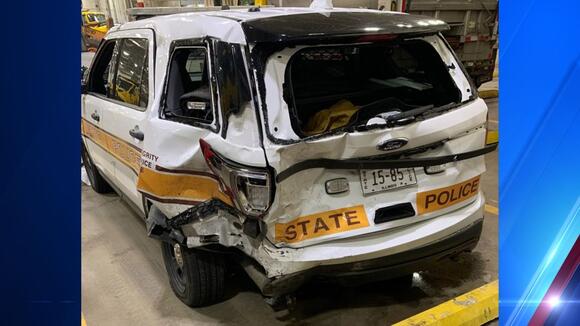 LEMONT, Ill. (WTVO) — For the 15th time this year, an Illinois State Trooper has been involved in a crash while they were pulled over on the side of the road.

Friday afternoon, at 2 p.m., the trooper was on a traffic stop on Interstate 355 with his emergency lights on when a Toyota Tacoma failed to yield and hit the rear driver’s side of the car.

The driver of the car, Evan Johnson, 24, of Tinley Park, and the trooper, were hospitalized with non-life threatening injuries, police said.

“ISP Troopers work hard to protect the motoring public on Illinois roadways.  We need the public to avoid putting their lives and the lives of others at risk by making responsible choices when behind the wheel.  Always pay attention and move over when you approach a stationary vehicle on the side of the road,” stated District 15 Commander, Captain Jason Bradley.

Four troopers have been injured this year in similar crashes, each a violation of the Move Over Law (Scott’s Law), which requires drivers to move into a far lane and slow down around stopped emergency vehicles.

It really doesn't matter if you like the police or disagree with their reason for the stop. The law clearly states you are to yield to emergency vehicles with their lights on. This includes police, fire, EMS, tow trucks, IDOT, etc...

I worked as a Unioin Laborer for over 34 years and know there are laws governing people who speed near or around police vehicles so, are they going to prosecute this person who caused this crash to the full extent of the law or not again?

WOW! The ignorance and stupidity of the only two comments so far is frightening, especially when you consider the commenters can drive!

If you get a call from Illinois State Police, it’s a scam

ROCKFORD, Ill. (WTVO) — Have you received a phone call from the Illinois State Police recently? If so, you’re not the only one. The ISP is warning residents of a phone scam called “spoofing,” in which scammers are making phone calls with their number disguised to look as though it’s coming from police. Police said […]
ILLINOIS STATE・1 DAY AGO
MyStateline.com WTVO WQRF

Colorado motorcyclist who struck moose plans to eat it

Colorado Parks and Wildlife said striking an animal on purpose is tantamount to poaching, but similar to this case, it isn't a crime when it's an accident.
COLORADO STATE・2 DAYS AGO
MyStateline.com WTVO WQRF

Winnebago County Board calls for repeal of Illinois’ SAFE-T Act

ROCKFORD, Ill. (WTVO) — The Winnebago County Board voted in against supporting Illinois controversial SAFE-T Act law, which would eliminate cash bail statewide on January 1st, 2023. The board approved a measure Thursday night, with a 13 to 6 vote, in favor of calling for the law to be repealed in the General Assembly. “We […]
WINNEBAGO COUNTY, IL・1 DAY AGO
MyStateline.com WTVO WQRF

A Missouri farmer has been sentenced to life in prison after he admitted he killed two Wisconsin brothers who disappeared after visiting his farm in July 2019.
SHAWANO COUNTY, WI・1 DAY AGO

PEORIA, Ill. (WTVO) — As the automotive industry makes a shift toward electric vehicles, the Illinois Department of Transportation says it is considering taxing EV charging stations in an effort to offset the projected revenue loss from fuel sales. State gasoline taxes currently fund much of Illinois’ road and bridge projects. According to IDOT Transportation […]
ILLINOIS STATE・1 DAY AGO
MyStateline.com WTVO WQRF

There are areas of dense patchy fog out there this morning so make sure to travel safe. The National Weather Service did issue a Dense Fog Advisory for Rock County in Southern Wisconsin until 9am Saturday morning. Other areas in the Stateline are still seeing a reduction in visibility out there. As of 6:00am Rockford […]
ROCK COUNTY, WI・10 HOURS AGO
MyStateline.com WTVO WQRF

A look back at the ‘Tylenol Murders’ 40 yrs later

CHICAGO – 40 years ago today, what would become known as the “Tylenol Murders” started to tragically unfold in Chicagoland. Over the span of three days seven people died from poisoning after ingesting cyanide-laced capsules of Extra -Strength Tylenol bought in local drugstores. The case terrified Chicagoans, gripped the nation, and led drug companies to […]
CHICAGO, IL・1 DAY AGO
MyStateline.com WTVO WQRF

CHICAGO (AP) – Illinois Gov. J.B. Pritzker warned that his Republican opponent is a far-right politician who would take the state backward while state Sen. Darren Bailey asked voters to consider whether the Democratic incumbent’s first term has improved their lives as the two candidates met for an online forum Friday. The event hosted by […]
ILLINOIS STATE・1 DAY AGO
MyStateline.com WTVO WQRF

Multiple people across six states have been hospitalized after being infected with a strain of listeria that may be linked to contaminated brie and camembert cheeses.
MICHIGAN STATE・1 DAY AGO
MyStateline.com WTVO WQRF

A woman and a former NFL player were found dead near a Riverside County peak after rescue crews responded to reports of injuries, authorities said.
LONG BEACH, CA・1 DAY AGO

Hurricane Ian continues to batter the Florida peninsula Thursday after it was downgraded to a Category 1 system Wednesday evening, according to the National Hurricane Center.
FLORIDA STATE・1 DAY AGO
MyStateline.com WTVO WQRF

Why do flies rub their limbs together?

ROCKFORD, Ill. (WTVO/WQRF)–Belvidere North has cracked the AP State Football Rankings this week in Illinois. Following is where all of our Rockford area teams rate following five weeks of action. Class 7A#8 Hononegah (5-0) Up from ten last week Class 6A#9 Belvidere North (5-0) unranked last week Class 5A#3 Sycamore (5-0) up from fourth last […]
BELVIDERE, IL・3 DAYS AGO
MyStateline.com WTVO WQRF

Hurricane Ian is one of the most powerful storms ever recorded in the U.S. But there have been worse.
FLORIDA STATE・2 DAYS AGO
MyStateline.com WTVO WQRF

Who will be Texas' governor in 2023?
TEXAS STATE・1 DAY AGO
MyStateline.com WTVO WQRF

Homecoming is a Texas tradition as old as time. But what happened in Burkburnett last weekend is a moment that transcends traditions altogether.
BURKBURNETT, TX・23 HOURS AGO