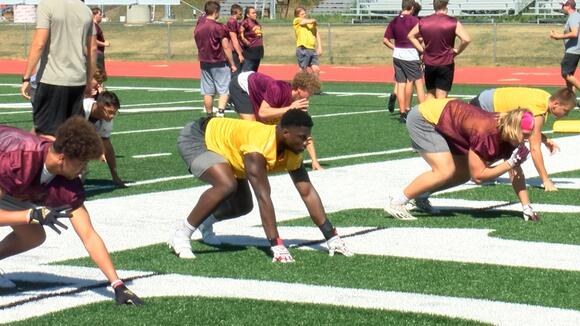 HARRISBURG, S.D. (KELO) – Fresh off their first state championship in ‘AAA’ football, the Harrisburg Tigers enter the 2022 season as the top dogs.

“When you win a state title, the energy is extremely high in your community, extremely high with your program and the kids coming back, they kind of want to build of that and they want to repeat like some schools do. Pierre’s been there and we wouldn’t mind being in their shoes once in a while repeating year in and year out,” Harrisburg Head Coach Brandon White said.

“But these guys understand it’s going to take a lot of hard work and they’re going to have to build their own legacy here this season and they look forward to it.”

All State running back Gavin Ross returns. But he’ll be running behind an entirely new offensive line while star quarterback Jacob Knuth, now a freshman the University of Minnesota, makes room for a new signal caller behind center.

“Dylan Elrod had a fantastic summer. His progression maturity wise, they game is starting to slow down for him so he’s going to play some. We may dabble with some other guys in some different package type stuff, but it’s going to be a fun thing to see the growth of that group and them to battle it out in fall camp,” White stated.

The chance to repeat as champs has provided plenty of motivation; but the recent tragic passing of former Harrisburg offensive lineman Mason Jacobson has given a whole other meaning to the upcoming season.

“To lose somebody like that is very difficult. He loves football so he would want us to be in this exact situation right now moving on in that sense. But his presence will be here all season long,” White said of his former player.

“They’ll be some things that we’re going to add to the stadium to commemorate him and what he did for us at Tiger football.”

The Tigers will open the season on august 26th against Jefferson.

A longtime college women’s basketball coach will be retiring after this upcoming season.
SIOUX FALLS, SD・3 HOURS AGO
KELOLAND

Viewers have a chance to vote this week for the eighth edition of the Viewers' Choice Game of the Week.
SIOUX FALLS, SD・1 DAY AGO

SIOUX FALLS, S.D. (KELO) – Augustana University and the University of Sioux Falls did battle this past Saturday looking to secure the Key to the city. “It’s Division II football at its finest. It’s two traditionally strong programs, it’s two good fan bases, it’s not a far road trip for either group, right? So, it’s […]
SIOUX FALLS, SD・1 DAY AGO
KELOLAND

MITCHELL, S.D. (KELO) – Day one of the boys Class AA state championship is in the books and it’s the Harrisburg Tigers who currently sit at the top with an overall score of (-2). Full team and individual results can be seen below: TEAM RESULTS 1. Harrisburg -2 (286) 2. Pierre T.F. Riggs +6 (294) […]
HARRISBURG, SD・1 DAY AGO
KELOLAND

ABERDEEN, S.D. (KELO) – Four golfers entered the day tied atop the leaderboard at +2, but it would be Tea Area’s Keeton Newborg who would outlast everyone shooting a 74 en route to the Class A individual state title. In the team championship race, the Vermillion Tanagers would coast to victory by 24 strokes over […]
TEA, SD・19 HOURS AGO

Vermillion in control at Class A State golf Tournament

ABERDEEN, S.D. (KELO) – After day one of the Class A boys state golf tournament in Aberdeen, the Vermillion Tanagers own a 16 stroke lead over second place Aberdeen Roncalli. The full team and individual leaderboards from day one can be viewed below: TEAM RESULTS 1. Vermillion +16 304 2. Aberdeen Roncalli +32 320 3. […]
VERMILLION, SD・1 DAY AGO
KELOLAND

Another jam packed slate of football has helped fill the KELOLAND.com top plays of the week. Here's a look at the top five:
HARRISBURG, SD・5 DAYS AGO
KELOLAND

USF holds off Augie comeback, retains the Key to the City

USF held off a late comeback from Augustana on Saturday as the Cougars picked up a 31-24 win, to keep the key at USF.
SIOUX FALLS, SD・3 DAYS AGO
KELOLAND

SportsZone Saturday returns this Saturday and we'll preview a longtime rivalry in Sioux Falls. Augustana and USF will meet for the 28th time and we hear from both teams ahead of the matchup.
SIOUX FALLS, SD・4 DAYS AGO
KELOLAND

The KELOLAND.com Game of the Week returns this Friday with a battle of the top two teams in 11AAA.
SIOUX FALLS, SD・5 DAYS AGO
KELOLAND

High school football players will take to the field on Friday evening across KELOLAND.
SIOUX FALLS, SD・5 DAYS AGO

USF and Augustana to play for Key to the City

The USF and Augustana football teams are both 4-0 this season. The two rivals will now put those undefeated records on the line when they cross paths for the 28th time.
SIOUX FALLS, SD・5 DAYS AGO
KELOLAND

The Augustana football team is off to a perfect 4-0 start this season. Much of their success stems from the second best scoring defense in the Northern Sun Conference, as the Vikings are allowing less than 16 points per game.
SIOUX FALLS, SD・6 DAYS AGO
KELOLAND

The Harrisburg girls soccer team continued its roll with a 6-0 victory over Jefferson on Tuesday, while Sioux Falls Christian pulled out the 1-0 victory over Vermillion.
SIOUX FALLS, SD・7 DAYS AGO
KELOLAND