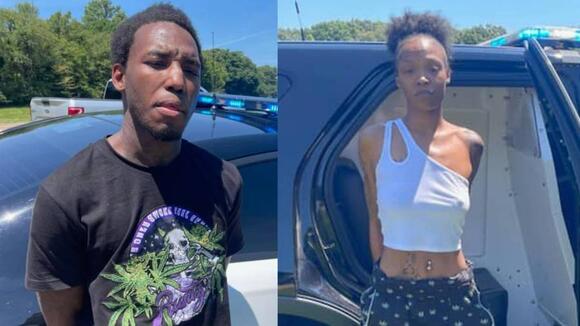 MEMPHIS, Tenn.– A Memphis couple was arrested after a police chase in Senatobia, Mississippi Friday morning.

Senatobia Police said around 11:23 a.m., officers tried to conduct a traffic stop on I-55 at East Main Street, but the driver, identified as 28-year-old Marquavious Moore, refused to stop the vehicle.

Police reportedly chased Moore into DeSoto County until stop sticks were deployed, causing him to lose control of the vehicle.

Moore and his girlfriend 23-year-old Dania White was taken into custody near the Pleasant Hill Road exit.

White was also charged with possession of drug paraphernalia.

More is being held at the Tate County jail. His bond will be set at a later date.

Hernando Police and the DeSoto County Sheriff’s Office also assisted in the arrests.

🤣🤣 They went down South-South and though Memphis rules still applied. No sir, MS gone chase you till the wheels fall off everyone of those squad cars..

send a very strong message to these two, to where they will never forget it and their friends.

MEMPHIS, Tenn. — A man was found stabbed and critically wounded Tuesday morning at a gas station at Mississippi Boulevard and Crump Boulevard, police said. Police believe the stabbing happened in the 500 block of East Alston in South Memphis. Police responded to the call at 5:21 a.m. The victim was taken to Regional One […]
MEMPHIS, TN・15 HOURS AGO
WREG

‘There were evil spirits:’ Woman arrested in string of arsons in SW Memphis

MEMPHIS, Tenn. — Police have arrested the woman they say is responsible for a string of arsons in Southwest Memphis. Delina Collier or “DC” was arrested Monday in the 38109 area, the Memphis Fire Department said. MFD identified Collier, 22, as a person of interest in the arsons last Wednesday. Eight arson fires were reported […]
MEMPHIS, TN・14 HOURS AGO
WREG

MEMPHIS, Tenn.– Memphis Police are looking for suspects after a man was shot and killed in the airport area Sunday. Police say officers responded to a shooting in the 3000 block of Directors Row around 12:15 a.m. The victim, identified as Eugene Keefer, was pronounced dead at the scene. According to police, Keefer was found […]
MEMPHIS, TN・5 HOURS AGO
WREG

Stolen liquor from Buster’s was sold out of South Memphis Apartment, police say

MEMPHIS, Tenn. — Memphis police say alcohol taken from Buster’s Liquor store in East Memphis was being advertised on Facebook and sold out of a South Memphis Apartment. Investigators said a Facebook post showing unopened bottles of liquor for sale led them to the Hill View Village Apartments on Alcy. They said people at the […]
MEMPHIS, TN・1 HOUR AGO
WREG

MEMPHIS, Tenn. —  A preliminary hearing is set for Tuesday for the man accused in a mass shooting across Memphis earlier this month. Right now, Ezekiel Kelly is only facing one count of murder instead of three but, more are expected to come as sources say numerous felony charges are pending against Kelly. Kelly, 19, […]
MEMPHIS, TN・18 HOURS AGO
WREG

CORDOVA, Tenn. — Four people were arrested Sunday outside a Cordova house the Shelby County Department says has been targeted by thieves at least seven times since June. Deputies were called to the house in the 9800 block of Humphrey around 5:30 p.m. after a neighbor spotted two strange vehicles in the driveway and saw […]
SHELBY COUNTY, TN・1 DAY AGO
WREG

MEMPHIS, Tenn.– A woman is in critical condition after a shooting at an apartment complex in Whitehaven. Police responded to the shooting at the Creekside Meadow Apartments on Briarpark Drive at 7:45 p.m. Monday. The victim was transported to Regional One. Police say the suspect wearing a black hoodie fled the scene. This is an […]
MEMPHIS, TN・1 DAY AGO

MEMPHIS, Tenn. — A Collierville Police officer who was run over as he tried to apprehend a shooting suspect Saturday remained in critical condition Monday, police said. However, the officer is showing improvement. “We appreciate everyone keeping him in your thoughts and prayers,” said Major David Townsend with Collierville Police in a Facebook post Monday […]
COLLIERVILLE, TN・1 DAY AGO
WREG

MEMPHIS, Tenn.– Two people have been charged after a man’s car was stolen outside of a barbershop in Cordova earlier this month. Police say, on September 14, the victim was walking to his Dodge Charger the Pollards Barber Parlor on Germantown Parkway when an armed man demanded his car keys at gunpoint. On September 23, […]
MEMPHIS, TN・1 DAY AGO
WREG

Man accused of running over Collierville officer appears in court

MEMPHIS, Tenn.– A Memphis man accused of running over a Collierville police officer with his car was arraigned in court Monday for charges connected to a case, investigators say, happened before the officer was hit. In court, 32-year-old Keith Houston not only faced the judge but turned to face his family member sitting inside the […]
COLLIERVILLE, TN・1 DAY AGO
WREG

MEMPHIS, Tenn.– The Memphis city council is taking steps to explore how to help young people and tackle crime with a new resolution that would look at opening a curfew center in the city, a safe place where young people who are out too late can be taken. Memphis has a curfew law that states […]
MEMPHIS, TN・7 HOURS AGO

MEMPHIS, Tenn.– Memphis Police are looking for a woman who they say attacked workers at Dodge’s Chicken on Elvis Presley Boulevard Sunday night. Surveillance video shows the woman reaching across the counter, hitting one of the workers, and pushing the cash register off the counter. Police say she hit the worker after an argument. They […]
MEMPHIS, TN・1 DAY AGO
WREG

MEMPHIS, Tenn.– An off-duty police officer’s gun and taser were among items stolen during a string of car break-ins outside a Southeast Memphis restaurant. Customers at the Juicy Crab on Winchester were greeted with shattered glass scattered across the parking lot Tuesday. Memphis Police say at least four vehicles were vandalized Monday evening within a 6-minute window. One […]
MEMPHIS, TN・3 HOURS AGO
WREG

3 witnesses a no-show as Ezekiel Kelly appears in court

MEMPHIS, Tenn. — A judge issued subpoenas to three witnesses in the case of Ezekiel Kelly’s shooting rampage across Memphis when they failed to show up to a court hearing Tuesday. Kelly faced a preliminary hearing Tuesday, but he was escorted out and will appear again Oct. 18, after the witnesses needed to move the […]
MEMPHIS, TN・18 HOURS AGO
WREG

MEMPHIS, Tenn. (WREG) – Police in Memphis are looking for the person who stole a pregnant woman’s car while doctors were trying to save her baby’s life. Tamra Sandridge said her daughter, Tia Shipp, drove herself to Baptist East Hospital early Sunday morning because she knew something was wrong. Shipp delivered a 22-week-old boy in the emergency room bathroom.
MEMPHIS, TN・16 HOURS AGO
WREG

MEMPHIS, Tenn. — A Memphis woman is accused of killing her boyfriend following a shooting in Frayser. Police responded to the incident Sunday night at a home in the 3800 block of Lake Park Cove. According to an affidavit, Tarriney Jefferson was arguing with Earnest Prince Jr. about a cell phone before firing shots at […]
MEMPHIS, TN・1 DAY AGO
WREG

Suspect accused of shooting at family during road rage incident

MEMPHIS, Tenn.– An 18-year-old is facing charges after allegedly shooting at a man’s car with his wife and two young sons inside.  The victim, who chooses to remain anonymous, is still shaking after a road rage incident turned violent earlier this month.  “Going down 40, just minding our own business, and this truck just come […]
MEMPHIS, TN・1 DAY AGO
WREG

MEMPHIS, Tenn. — Police say a woman arguing with her boyfriend at a home in Raleigh stabbed him so hard in the stomach it caused “his entrails to fall out of his body.” Diane Cottrell, 62, is charged with attempted second-degree murder. She is in the Shelby County Jail with no bond set. She has […]
MEMPHIS, TN・2 DAYS AGO
WREG

MEMPHIS, Tenn. — A Memphis man is accused of breaking into two businesses in the Edge District Saturday, causing more than $10,000 worth of damage. Police said they found Curtis Green, 33, hiding inside a bathroom at Memphis Made Brewery in the 400 block of Madison Avenue. They said he broke out windows of the […]
MEMPHIS, TN・1 DAY AGO