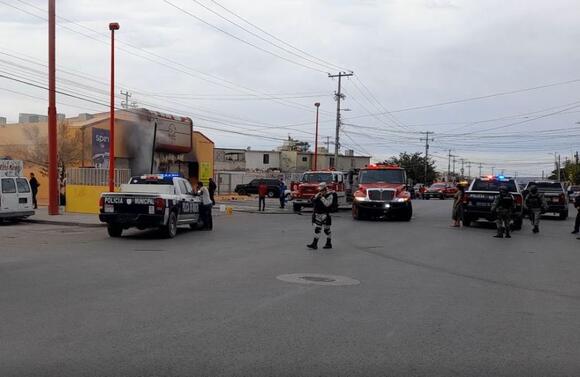 EL PASO, Texas (Border Report) – Javier Esquivel on Thursday night learned of the cartel attacks that claimed 11 lives and set fire to cars and businesses across the border in Juarez. On Friday, he got on his bicycle and set off to visit his mother in Mexico, as usual.

“There is a lot of mistrust, yes. As you can see, there’s little traffic (going to Mexico). But I have my mother and my brothers on the other side,” the Central El Paso resident said as he prepared to cross the Stanton Street Bridge. “I visit them every two weeks. Hopefully, things won’t get any worse.”

El Paso County Judge Ricardo Samaniego said the family, business and cultural ties between El Paso and Juarez are strong. So much so, that even extreme acts of violence won’t deter some from crossing.

“Our economies are interdependent. We have a symbiotic relationship with Ciudad Juarez. I’m not ready to tell people not to go over there but be extremely prudent. Rely on your relatives. Make sure they understand the environment they are going to visit,” Samaniego said.

The county judge said the violence in Juarez affects the entire region, as it makes it more difficult for government officials and business promoters in El Paso to convince companies from elsewhere in the United States to relocate their operations here.

Also, businesses on both sides of the Rio Grande are just coming out of the COVID-19 pandemic that decimated their bottom line. If El Pasoans stop visiting Juarez, businesses that rely on tourism, including medical tourism, will suffer. If the violence keeps Mexicans from making trips to the United States, El Paso businesses will suffer.

“We understand the dangers, but in the world we’re living in, we cannot get to a point that we don’t want to come out of our house. […] I think people know they have to coexist with a situation as you are working to make it better. You just need to be prudent.”

Alejandro, a young entrepreneur from Juarez, said that Mexican border city of 1.5 million people has no more crime than other big cities all over the world. “I have crossed the (international) bridge at 3 a.m. and walked home with no problems. You can be safe as long as you’re careful,” he said. “Sometimes things will be good and sometimes they will turn bad. You have no control over that.”

‘We own the streets’

Mexican authorities responded to Thursday’s drug cartel violence by flooding the streets of Juarez with soldiers and police patrols. That was meant to reassure residents the city was safe.

They also released additional details on some of the 11 victims. They included two women, ages 18 and 54, gunned down inside a convenience store, a 12-year-old child and a 54-year-old man apparently killed inside or next to a pickup truck. The two Cereso 3 inmates killed inside the facility — the act that authorities said sparked the violence — were identified as Kevin Alan Campos Aguilera and Raúl Abraham Sepúlveda Olivas.

Prior to Thursday’s events, Border Report h ad been documenting a steady increase in drug-related killings in Juarez. Some included beheadings, dismemberments and bodies wrapped in blankets left in front of schools and in parks.

Authorities seemingly dismissed these acts as gang-on-gang events not having much of a bearing in the general population. They told reporters at the time that it was them, not the cartels, who were in control of Juarez.

On Friday, after the latest round of violence, they repeated that claim.

A civils rights organization on Monday launched a binational campaign to document abuses against migrants and minority communities in the Southwestern United States and in Mexico.
EL PASO, TX・1 DAY AGO
Border Report

Migrant-related expenses by the City of El Paso are in excess of $4 million as of last Friday, city officials confirmed. Expenses include charter buses, hotel rooms, meals ready to eat and snacks for the migrants as they are bused to destinations outside El Paso.
EL PASO, TX・1 DAY AGO
Border Report

One dead after shooting at Border Patrol Station

EL PASO, Texas (KTSM) — A man who was a detainee has died after being shot at an East El Paso Border Patrol station, according to the FBI.  “FBI El Paso’s Violent Crime Task Force and Evidence Response Team were deployed to the Station. One person was taken into custody and was transported to a local […]
EL PASO, TX・21 HOURS AGO
KTSM

Suspects in migrant shooting death are back in Hudspeth County

Two brothers suspected in the Sept. 27 fatal shooting of a migrant near Sierra Blanca, Texas, are no longer in jail in El Paso.
HUDSPETH COUNTY, TX・19 HOURS AGO

U.S. Ambassador to Mexico Ken Salazar was in Juarez on Tuesday to tour a migrant shelter and attend a reading fair with the wife of the president of Mexico. He was also in El Paso to visit a U.S. Border Patrol’s temporary processing facility near the border wall.
EL PASO, TX・6 DAYS AGO
KTSM

EL PASO, Texas (Border Report) — Rage Against the Machine has canceled its 2023 North American tour, which included stops in El Paso and Las Cruces. Singer Zack De La Rocha injured his leg during a performance in Chicago in July, and the band cited his health as the reason behind the cancellation. In a […]
EL PASO, TX・1 DAY AGO
Border Report

Congresswoman wants DOJ to investigate shooting of migrants in Texas

“I’m calling on the Department of Justice to investigate a possible hate crime […] if we don’t get justice in these cases, I fear we will see more violence against migrants and communities with lots of immigrants." U.S. Rep. Veronica Escobar, D-Texas
SIERRA BLANCA, TX・4 DAYS AGO
Border Report

The Tuesday night shooting of two migrants in a rural West Texas town is setting off an alarm among activists already afraid that frustration with rising immigration rates would lead to violence.
HUDSPETH COUNTY, TX・5 DAYS AGO

El Paso wants to reestablish direct flights to Mexico, something the business community and City Council members say will boost business and tourism and help families reconnect with loved ones across the border.
EL PASO, TX・6 DAYS AGO
Border Report

20,000 Venezuelans have crossed into El Paso since July

The City of El Paso is considering spending an additional $4 million to provide migrants free bus rides to their destination of choice, as more and more Venezuelans without sponsors continue crossing over from Mexico.
EL PASO, TX・8 DAYS AGO
Border Report

Mexican authorities say they are sending soldiers and additional police officers to a town in the state of Zacatecas where six municipal policemen were shot dead Wednesday in broad daylight.
EL PASO, TX・6 DAYS AGO
Border Report

City Council on Tuesday approved spending an additional $4 million for migrant busing, as the number of individuals released from federal immigration custody in El Paso surpasses 800 per day.
EL PASO, TX・7 DAYS AGO

EL PASO, Texas (Border Report) – El Paso health authorities say the use of the potentially deadly drug fentanyl is on the rise and are warning residents not to consume it. “We are starting to see an increase in teens abusing the drug. We must take proactive measures to educate everyone, especially our youth on […]
EL PASO COUNTY, TX・7 DAYS AGO
Border Report

Texas state officials say they have arrested a man in connection with a Wednesday morning shooting in Hudspeth County that left a man with a gunshot wound to the face.
HUDSPETH COUNTY, TX・5 DAYS AGO
Border Report

EL PASO, Texas (Border Report) – Success is about lessons learned, and in the case of Gloria I.  Chavez, 2019 was a defining moment. That is when the newly appointed U.S. Border Patrol El Paso Sector chief agent was assigned to manage a migrant surge the likeness of it not seen in years. Press reports […]
EL PASO, TX・12 DAYS AGO
Border Report

Pugs reunited with migrant owners at end of 3,000-mile trek from Venezuela

"You never know what the Border Patrol is going to encounter at the border. We’re trying to be humane, not only with the people, but also with the animals we encounter.” El Paso Border Patrol Sector Chief Agent Gloria I. Chavez
EL PASO, TX・12 DAYS AGO
Border Report

Mexican cops arrest pair wanted in U.S.; one has murder warrant out of Dallas

Former Mexican President Benito Juarez, whose city across the border from El Paso, Texas, bears his name since 1888, is one of the iconic characters honored by the 12 Travelers Memorial of the Southwest with a bronze statue.
EL PASO, TX・14 DAYS AGO