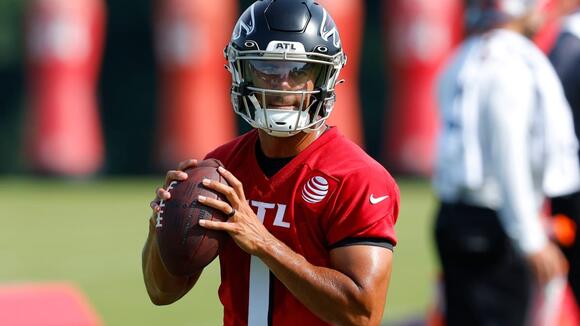 Atlanta's new-look quarterback room is off to a solid start.

The Atlanta Falcons scored a touchdown on their first offensive drive of the preseason, matching a 10-play touchdown drive by the Detroit Lions to kick off the game.

The touchdown was scored by quarterback Marcus Mariota , a free agent addition brought in to fill the Matt Ryan-sized void at the position. Mariota dropped back, face early pressure, rolled left, and scrambled into the endzone.

Mariota's first-drive touchdown highlighted the changing of the guard from Ryan, who had just 12 rushing touchdowns in 14 seasons with the Falcons.

Mariota, 28, has had quite the rollercoaster of an NFL career. Entering the league as a Heisman Trophy winner and the 2015 draft's No. 2 overall selection, he was a day one starter in the league.

After trudging through injuries and spurts of inconsistent play with the Tennessee Titans, Mariota was benched in 2019, his fifth season in the league. He's spent the last two seasons as Derek Carr's backup in Las Vegas.

In Atlanta, Mariota gets to reunite with head coach Arthur Smith , who was Tennessee's offensive coordinator. While things didn't work out too well last time for Mariota, he's off to a strong start with the Falcons, as Smith dubbed him (and Ridder) among the team's most impressive players at OTAs.

Mariota and Smith are off to a quick start together, with Mariota's athleticism on full display early, as Mariota has used his legs to his advantage behind the shaky Falcons offensive line, while also being employed on bootlegs.

With all eyes on the quarterback position, Mariota is off to a sound start in the face of pressure, both on and off the field.

The Atlanta Falcons are preparing to play the Cleveland Browns Sunday. But they might be doing so without star running back Cordarrelle Patterson.
ATLANTA, GA・14 HOURS AGO
Falcon Report

Atlanta Falcons safety Richie Grant arrived with immense external expectations, but that wasn't necessarily the case inside the building, at least as it pertained to his rookie season. With three games under his belt in year two, Grant's development-filled first campaign appears to be paying off.
ATLANTA, GA・2 DAYS AGO
Falcon Report

Atlanta Falcons tight end Kyle Pitts had his best game of the season last week against the Seattle Seahawks. But could the team get even more out of their first-round pick from a year ago?
ATLANTA, GA・2 DAYS AGO
Falcon Report

Falcons Coach Reveals Which Young Players Are 'Stepping Up'

The Atlanta Falcons have one of the youngest rosters in the NFL, but have managed to hold their own through three games. Apart from some of the big names, Falcons coach Arthur Smith singled out six young players who've elevated their game.
ATLANTA, GA・1 DAY AGO

Ahead of Sunday's contest, Atlanta Falcons coach Arthur Smith broke down the Cleveland Browns' offense, from general takeaways to the key players that make the unit run.
CLEVELAND, OH・14 HOURS AGO
Falcon Report

The Atlanta Falcons (1-2) look to add onto their Week 3 win with a home match-up against the Cleveland Browns (2-1).
ATLANTA, GA・11 HOURS AGO
Falcon Report

Atlanta Falcons running back Cordarrelle Patterson recorded a career-high in rushing yards against the Seattle Seahawks on Sunday and has received recognition from the NFL as a result.
ATLANTA, GA・2 DAYS AGO

Falcons Have 'Got to Stop' RB Nick Chubb in Order to Win Sunday vs. Browns

The Atlanta Falcons are expecting to play a physical football game Sunday against Nick Chubb and the Cleveland Browns. Chubb leads the NFL in rushing through three weeks.
ATLANTA, GA・1 DAY AGO