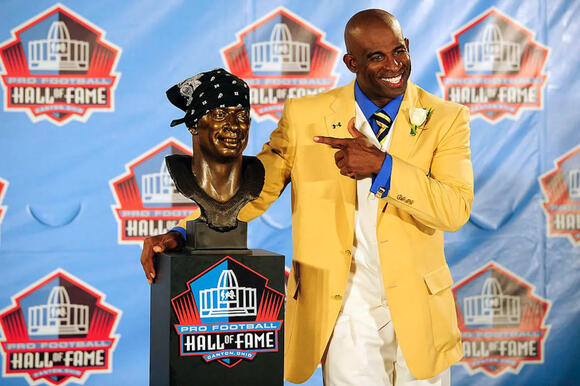 No more Gold Jacket for Sanders?

The Atlanta Falcons have nine players in the Pro Football Hall of Fame, but one of them believes his spot in Canton isn't enough.

Star cornerback Deion Sanders , speaking on behalf of Well Off Media, revealed that he believes the Hall of Fame is beginning to lower their standards for inductees.

There are 362 players enshrined in the Hall of Fame, a number that Sanders is okay with. However, he feels that his individual spot in Canton is deserving of better company - players who were "game changers," not just "good."

Largely viewed as one of the best cornerbacks in league history, Sanders' list of accolades features a Defensive Player of the Year award, and eight Pro Bowl and All-Pro selections. That's just the football side of things.

Sanders played nine seasons in the MLB, including three-plus with the Atlanta Braves. He's the only athlete to appear in both the Super Bowl and World Series.

Now the head coach of top HBCU football program Jackson State, Sanders is still just as involved as ever with game-changing athletes. As far as he's concerned, the Hall of Fame needs changing soon, so that the next generation of stars truly earn their way to Canton.

The star running back missed practice this week with a thigh injury.
CHARLOTTE, NC・27 MINUTES AGO
Falcon Report

Marcus Mariota says that Kyle Pitts and Drake London need to complement each other in the Atlanta Falcons order to be successful.
ATLANTA, GA・1 DAY AGO

Browns vs. Falcons: 5 Questions to Ask Before Sunday's Game

The Cleveland Browns and Atlanta Falcons are making their final preparations for Sunday's game. Jacoby Brissett and Nick Chubb star for the Browns.
CLEVELAND, OH・10 HOURS AGO
BuckeyesNow

The Atlanta Falcons struck gold with the signing of running back Cordarrelle Patterson. From his on-field breakout to off-field presence, the veteran has transformed Atlanta's rushing attack - while staying true to himself.
ATLANTA, GA・14 HOURS AGO
Sports Illustrated

Clemson Shows It’s Still the Standard in the ACC

Plus, No. 1 Georgia survived a serious scare and Bryan Harsin’s time at Auburn may have run out.
CLEMSON, SC・33 MINUTES AGO

Falcons Have 'Got to Stop' RB Nick Chubb in Order to Win Sunday vs. Browns

The Atlanta Falcons are expecting to play a physical football game Sunday against Nick Chubb and the Cleveland Browns. Chubb leads the NFL in rushing through three weeks.
ATLANTA, GA・2 DAYS AGO
Falcon Report

Despite having the NFL's best rushing attack, Atlanta Falcons coach Arthur Smith understands the Browns are not a one-dimensional offensive team.
ATLANTA, GA・16 HOURS AGO