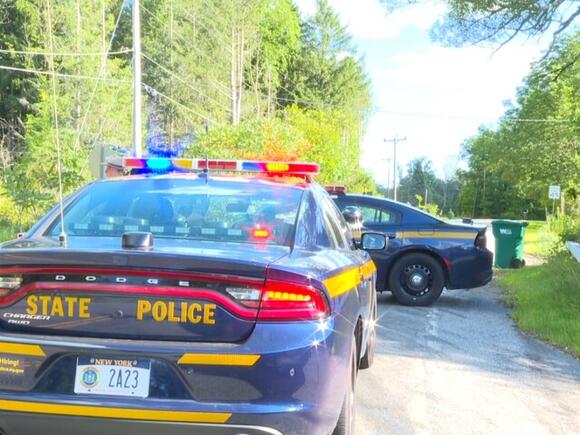 A standoff that occurred in Sardinia Thursday ended when an Erie County Sheriff's deputy shot the suspect.

The sheriff's office said deputies, the SWAT Team, crisis negotiators, bomb technicians, and Air-1 responded to 10349 Savage Road around 1:30 p.m. for the report of a man with a gun who threatened to harm himself and a family member.

During the incident, 37-year-old James Zbytek allegedly pointed a gun at sheriff's personnel multiple times. A deputy engaged and shot Zbytek in the lower leg. Deputies then entered the residence and placed him in custody and rescued an elderly individual with restricted mobility issues.

The sheriff's office said Zbytek was transported to Bertrand Chaffee Hospital via ambulance and later by Mercy Flight to Erie County Medical Center to be treated for his injuries and he remains in sheriff’s custody.

On Monday, the Erie County District Attorney's Office announced Zbytek was arraigned on the following charges:

The judge set bail at $1,500 cash, $15,000 bond, property or partially secured bond and a return court date has not been scheduled. If convicted of the highest charge he faces a maximum sentence of seven years in prison.

Investigators say a vehicle driven by 61-year-old Edward Marzycki of Perry failed to negotiate a curve in the road and collided with a patrol car.
WYOMING COUNTY, NY・1 DAY AGO
WKBW 7 News Buffalo

Police are trying to crack the case of a shooting in Buffalo. Authorities say somebody shot a 39 year old man near the intersection of Minnie Gillette Drive and South Division Street.
BUFFALO, NY・7 HOURS AGO
WKBW 7 News Buffalo

Buffalo man pleads guilty to one count of assault

A student at Kenmore West High School is facing criminal charges after a BB gun was found in his locker this morning.
BUFFALO, NY・2 DAYS AGO
WKBW 7 News Buffalo

All eastbound lanes between exit 49 and exit 48A on the I-90 New York State Thruway were closed on Thursday due to a tractor trailer crash.
DEPEW, NY・2 DAYS AGO
WKBW 7 News Buffalo

Residents who live near a vacant home on Buffalo's West Side say people are overdosing there. They said it took days for one body to be found.
BUFFALO, NY・2 DAYS AGO
WKBW 7 News Buffalo

A Town of Tonawanda business owner is not letting a burglary get in the way of doing business. Jeremy Lupke, owner and master goldsmith at Gem Design Jewelers on Delaware Avenue.
TONAWANDA, NY・4 DAYS AGO
WKBW 7 News Buffalo

A warning from the FBI for you and your family — beware of Sextortion and recently the Town of Hamburg Police Department posted a message on its Facebook page about this issue.
HAMBURG, NY・5 DAYS AGO
WKBW 7 News Buffalo

Push to connect southtowns to ski country by bicycle

The push to finish a recreational bike trail from the southtowns into ski country, getting a big boost. More than 350 bike riders took part in the East Aurora to Ellicottville Charity Bike Ride.
ELLICOTTVILLE, NY・7 HOURS AGO
WKBW 7 News Buffalo

Hurricane Ian officially the "fourth strongest hurricane" to ever make landfall in Florida. Buffalo natives say the damage in Florida is unbelievable and will take a long time to clean up.
BUFFALO, NY・2 DAYS AGO
WKBW 7 News Buffalo

The Every Child Matters annual walk welcomed hundreds to walk from Seneca Square to Niagara Falls. Organizers said this event is to help heal and never for those who endured Residential Schools.
NIAGARA FALLS, NY・1 DAY AGO
WKBW 7 News Buffalo

Human and furry friends are invited to Brazen Brewing on October 1 for their Ales & Tails event benefiting Be Their Voice Rescue.
LANCASTER, NY・3 DAYS AGO
WKBW 7 News Buffalo

Buffalo is serving as the backdrop to a new nationwide initiative to combat hate crime. The U.S. AG's office launched the "United Against Hate" program to make it easier to report hate crimes.
BUFFALO, NY・2 DAYS AGO