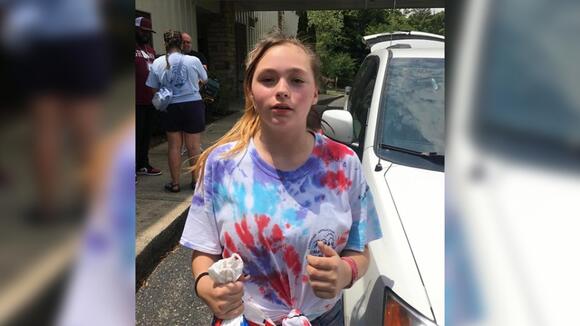 According to the sheriff’s office, deputies and Paintsville EMS responded around 11 a.m. Thursday, Aug. 11 to a “reported assault” in the Van Lear community. Deputies say when they arrived on the scene, they found a man identified as Stacy Collins with what authorities say they believe was a “self-inflicted gunshot wound.” Collins was taken to an area hospital for treatment.

During the investigation, authorities found that Collins’ 12-year-old daughter was missing. Deputies made followed “numerous leads” to find the girl, and then began working with Emergency Management Director Gary McClure to assemble search parties.

The girl’s mother, Summer Leigh Mullins, has confirmed to 13 News that the girl was her daughter, Stacia Leigh Collins.

Deputies say, with public assistance, the girl was found dead Thursday evening in the Miller’s Creek area of Boons Camp. The JCSO says they will not be releasing any further information at this time.

UPDATE (2:09 p.m. on Friday, Aug. 12): The body of a young girl found in Johnson County, Kentucky, has been identified by the girl’s mother.

Summer Leigh Mullins confirmed to 13 News that her daughter, Stacia Leigh Collins, was shot to death and that her body was found Thursday evening.

13 News is on the scene in Kentucky, and we will provide updates as new information becomes available.

JOHNSON COUNTY, KY (WOWK) – Authorities in Johnson County are investigating after a juvenile’s body was discovered on Thursday evening.

According to Johnson County Coroner J.R. Frisby’s Office, a search party found the body of a female juvenile in the Miller’s Creek area of Boons Camp, Kentucky around 5:30 p.m. Thursday, August 11, 2022. Authorities say the juvenile had been deceased for several hours.

Though the body has not yet been identified, search parties had been searching for a missing 12-year-old girl in the area. On Thursday, the Johnson County Sheriff’s Office requested the public’s help in finding 12-year-old Stacia Leigh Collins from Van Lear, Kentucky.

The coroner says the body has been taken to Frankfort for an autopsy. Johnson County Sheriff’s Office is investigating.

Oh my goodness! Please comfort her family Lord Jesus. I thank You for being with all of our kids throughout Your whole creation and I pray You will please cover them with Your hedge of protection against all evil, if its aligned with Your intended plans. In Jesus'Name I humbly pray, Amen.

what about the Father ?? obviously the Father shot his own daughter and then played the suicide game which I don't know if it worked or not because all you people said was that he was found with what appeared to be a self inflicted gun shot wound and transported to the hospital !!

UPDATE: (6:10 p.m. Saturday, Sept. 24, 2022): Authorities have confirmed that a 12-year-old boy who fell into the water near where the Ohio and Guyandotte rivers meet has been found deceased. According to Huntington Fire Chief Fuller, the boy’s body was found just before 6 p.m. Saturday, Sept. 24. His body was taken to the […]
CABELL COUNTY, WV・1 DAY AGO
WOWK 13 News

HUNTINGTON, WV (WOWK) – A Huntington man accused of hitting a 14-year-old while driving under the influence was in court today, Friday, Sept. 23, 2022. Matthew Jenkins is facing several charges related to the crash including DUI Causing Bodily Injury, Leaving the Scene of an Accident, and Obstructing an Officer. The victim, Christopher Andrews, tells […]
HUNTINGTON, WV・2 DAYS AGO
WOWK 13 News

UPDATE: Chapmanville fire chief addressed rumors of wrongdoing back in 2019

LOGAN COUNTY, WV (WOWK) – Chapmanville residents said it wasn’t a surprise that their volunteer fire department is under investigation for misuse of public funds. Back in June 2019, the Chapmanville Town Council was alerted of similar allegations against former Chapmanville Volunteer Fire Department chief Thomas Perry. According to meeting minutes, Perry appeared in front […]
CHAPMANVILLE, WV・1 DAY AGO

HUNTINGTON, WV (WOWK) – At least one person was injured after a vehicle crashed into a gas station this evening. Cabell County 911 dispatchers say the incident happened just before 6 p.m. Saturday, Sept. 24 at the Speedway in the 4300 block of Route 60. According to Cabell County Sheriff Chuck Zerkle, a vehicle driven […]
HUNTINGTON, WV・1 DAY AGO
WOWK 13 News

Haunted tours in the Tri-State

CABELL COUNTY, WV (WOWK) – Cabell County now has the option for residents to text 911 if they are unable to call the number. Cabell County 911 says the newly launched Text-to-911 service is available across all cell phone providers, and allows them to receive text messages from residents during an emergency. Dispatchers and county […]
CABELL COUNTY, WV・2 DAYS AGO
WOWK 13 News

HUNTINGTON, WV (WOWK) – The Huntington community came together this weekend for an event to raise awareness for veterans during Suicide Prevention Month. Representatives from the Hershel “Woody” Williams VA Medical Center were at the event at Ritter Park on Saturday, Sept. 24, to raise awareness and provide help and resources to veterans who are […]
HUNTINGTON, WV・20 HOURS AGO

HUNTINGTON, WV (WOWK) – One family said they’re left finding a new home for their loved one after the Grayson Assisted Living facility in Lavalette closed it’s doors on Wednesday, Sept. 21. Erin Roby said she planned to move her mother into the facility this weekend. “I was very shocked … and of course I […]
LAVALETTE, WV・2 DAYS AGO
WOWK 13 News

Raceland has huge second half showing

Our 13 Sportszone Band of the Week is the Lincoln County marching band, who had a strong showing at Cabell Midland.
LINCOLN COUNTY, WV・2 DAYS AGO
WOWK 13 News

It's week five of the West Virginia high school football season, and this week our 13 Sports Zone Game of the Week was Parkersburg at Cabell Midland.
PARKERSBURG, WV・2 DAYS AGO
WOWK 13 News

Our 13 Sportszone game of the Week is a big MSAC clash.
PARKERSBURG, WV・2 DAYS AGO
WOWK 13 News

Huntington collects three in a row

HUNTINGTON, WV (WOWK) – The Greek Festival returned to Huntington this weekend for its 40th anniversary. The festival took place Saturday, Sept. 24, celebrating Greek culture. The once small event brought out hundreds of people this weekend. Several activities were packed into the festival, including music, Greek dancing, and of course Greek food. “We have […]
HUNTINGTON, WV・18 HOURS AGO

The Herd improve to 5-1-1 on the season. They'll travel to Conway, SC. to face Coastal Carolina Friday.
HUNTINGTON, WV・1 DAY AGO
WOWK 13 News

Word of the Week: the blind side

It's week five of the high school football season, and tonight's Word of the Week was the 'blind side.'
ONA, WV・2 DAYS AGO
WOWK 13 News

The Knights improve to 3-1 and will next host Oak Hill.
ONA, WV・2 DAYS AGO