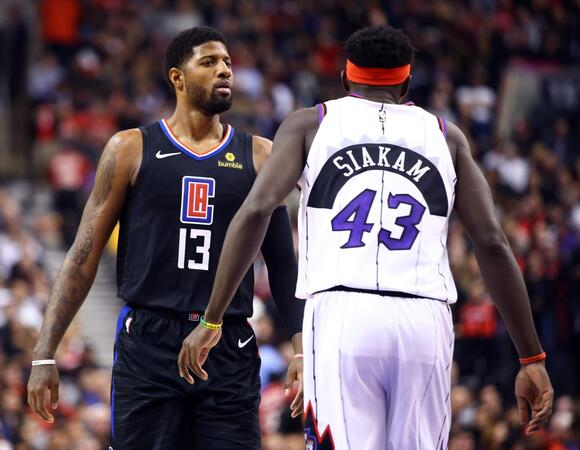 It is that time of the offseason where NBA stars team up for summer workouts and scrimmage games. In a recent Instagram post, LA Clippers star Paul George was seen being guarded by Toronto Raptors star Pascal Siakam:

Paul George and Pascal Siakam have had some good battles since Siakam broke out in the 2018-19 season. Winning most improved player that regular season, Siakam also helped the Raptors to their first championship in franchise history. Coincidentally, that of course came alongside Kawhi Leonard, who then left Toronto to team up with Paul George in Los Angeles with the Clippers.

Since arriving to the Clippers, Paul George has faced Siakam and the Raptors twice, winning both contests. That said, Siakam has outscored George in both matchups, with an even 24 points in each game. With the Raptors often playing an aggressive defense on both Kawhi Leonard and Paul George, others on the Clippers have been forced to step up.

The NBA offseason almost always sees opponents become workout partners, with Los Angeles often being a popular spot for these practice runs. With much of the Raptors squad in Los Angeles for summer runs with skills coach Rico Hines , Clippers star Paul George was able to go against Siakam while the All-Star forward was in town.

Former Cleveland Cavaliers forward Richard Jefferson commented in a series of tweets on the likely suspension of Boston Celtics head coach Ime Udoka for a relationship with a female team staffer. Jefferson’s confusion on the suspension is because the expected length will be a full year when the final decision...
BOSTON, MA・2 DAYS AGO
TMZ.com

The Celtics employee with whom Ime Udoka had an affair helped make all his travel arrangements ... and that job sometimes included organizing travel for his fiancee, Nia Long. Sources connected to the couple and the NBA franchise tell TMZ ... one of the staffer's duties included planning Udoka's team-related travel, and we're told she was also involved in booking travel for Nia to come to Boston or to road games.
BOSTON, MA・13 HOURS AGO
Yardbarker

Whenever anyone talks about the Phoenix Suns, it is the superstars Devin Booker and Chris Paul who often stand out. But the Suns are much more than just Booker and CP3. Boasting some of the best role players, the Suns are a very balanced side. Among one of the most important role players on the team is Jae Crowder.
PHOENIX, AZ・1 DAY AGO
AllClippers