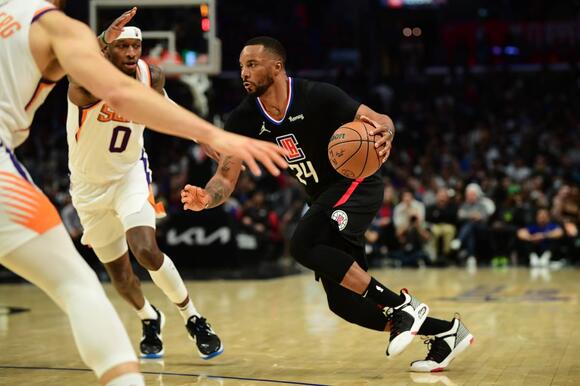 Norman Powell believes in the Clippers

In an exclusive interview with 213 Hoops' David Yapkowitz , Norman Powell revealed his thoughts about the Clippers' ceiling.

“There’s so many different lineups we can throw out there offensively and defensively," Powell said. "Small ball, guys who can shoot, shooting lineups, defensive lineups, run and go defensive lineups, there’s just so many different things the coaches can do, it just depends on how they want to fit it,” Powell said. “We got nine, ten guys that can be starters on other teams and to have them all on one team is really big especially throughout the course of the season. We showed last year that with injuries and things, guys can step up and play big minutes, but if everybody is healthy, it’s a real good shot to have a championship.”

If there's anything good about the injury-filled season the Clippers experienced last year, it's the growth it created in their younger players. Players like Terance Mann, Ivica Zubac, Luke Kennard, and Amir Coffey were all able to get real game-time minutes that influenced winning minutes. This season, all of the pieces need to come together and the Clippers will certainly contend for an NBA Championship if they're healthy.

John Wall made his LA Clippers debut in a pre-season win over the Portland Trail Blazers
LOS ANGELES, CA・2 DAYS AGO
AllClippers

Three players have been removed from their roster.
LOS ANGELES, CA・1 DAY AGO
AllClippers

Two free agents are expected to sign with the Clippers
LOS ANGELES, CA・1 DAY AGO

Now with the Los Angeles Lakers, Patrick Beverley still has a relationship with his LA Clippers teammates
LOS ANGELES, CA・1 HOUR AGO
AllClippers

The LA Clippers are happy to have their star duo back
LOS ANGELES, CA・1 DAY AGO
AllClippers

Kawhi Leonard has improved his body to be better than before.
LOS ANGELES, CA・20 HOURS AGO
AllClippers

Kawhi Leonard Reacts to First Game Back From Injury