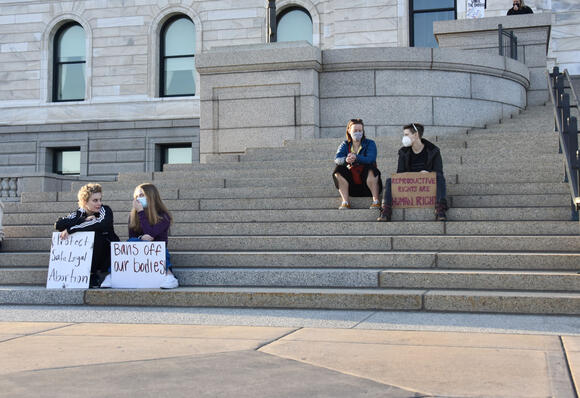 Abortion rights advocates at the Minnesota State Capitol in St. Paul on Tuesday, May 3 in the wake of a leaked Supreme Court draft opinion overturning Roe v. Wade. Photo by Christine Schuster | Bring Me The News.

The bill, which Reynolds signed in 2018, prohibits nearly all abortions in the state at six weeks — however, the law never took effect and was ruled unconstitutional, The Des Moines Register reports.

In an announcement Thursday, Reynolds said the U.S. Supreme Court's reversal of Roe v. Wade brings "new hope and a pathway forward" to challenge the court's injunction on the ban.

“Life and death are determined by a person’s heartbeat, and I believe that includes our unborn children," she stated. "As long as I’m Governor, I will stand up for the sanctity of life and fight to protect the precious and innocent unborn lives.”

In June, the Iowa Supreme Court overruled a 2018 ruling that found the Iowa Constitution protected abortion as a fundamental right.

Abortion restrictions in Iowa could now soon gain the legal footing to be enforced, further increasing demand for the procedure in Minnesota, where clinics are already bracing for an influx in patients due to bans in Wisconsin, South Dakota, and possibly soon North Dakota.

There were 3,761 abortions preformed in Iowa last year, according to data from the Iowa Department of Health.

“Governor Reynolds' move to revive the six-week abortion ban, which is before most pregnancies can be detected, is both dangerous to women’s health and cruel," said Sarah Stoesz, president and CEO of Planned Parenthood North Central States, in a statement Thursday.

"If she is successful, her move will cause harm to Iowans and their families, as we have seen occurring in states such as Texas where a similar ban has taken effect," Stoesz continued. "Governor Reynolds should let people live their own lives without coercion from the state, and should let doctors practice medicine in a manner that protects women’s health and lives."

"This is an outrageous and dangerous attack on Iowa women looking to take away practically all access to abortion in our state," Austen stated. "The law the Governor is seeking to 'revive' blocks abortions at about six weeks, a stage at which many people don't even know they're pregnant—so it's a nearly complete ban on abortion. We will continue to do everything in our power to stop attempts at banning abortion in Iowa."

constitution was written when women were not considered people, we were chattel. constitution should be amended to empower women to control their reproduction and have babies when they are ready. there are already 8 billion people on the planet

"Religious institutions that use government power in support of themselves and force their views on person's of other faiths, or of no faith, undermine our civil rights. Moreover, state support of an established religion tends to make the clergy unresponsive to their own people, and leads to corruption with the religion itself. Erecting the 'wall of separation between church and state,' therefore, is absolutely essential in a free society." Thomas Jefferson

If every time men had sex they risked death, physical disability, social shunning, a life altering interruption of their education or career, and the sudden life long responsibility for another being, I think they'd expect a choice in the matter

Republican candidate for Minnesota governor Scott Jensen has been criticized for repeating a right-wing hoax about cat litter boxes in schools. Video footage of Jensen speaking at a campaign event last week came to the attention of CNN's K-File team, which shows Jensen mention a widely debunked rumor that school districts have been providing litter boxes for students who "identify as a furry."
MINNESOTA STATE・2 DAYS AGO
Bring Me The News

Frontline worker payments: Over a million Minnesotans to get $487.45

Minnesota workers who qualify for "hero pay" relating to the COVID-19 pandemic will see checks arrive starting this week, though the amount they'll be receiving is less than lawmakers had intended. The Office of Gov. Tim Walz confirmed that 1,025,655 frontline workers qualified for the payments passed by the Minnesota...
MINNESOTA STATE・2 DAYS AGO
Bring Me The News

Sweetgreen is now open at the Galleria in Edina in the space formerly occupied by People's Organic. Photo courtesy of sweetgreen. Fast-casual salad chain sweetgreen is officially open in Minnesota. The first of the California-based company's four Twin Cities locations opened at the Galleria in Edina last month. A location...
EDINA, MN・23 HOURS AGO

For the first time in a decade, the Arctic Monkeys will perform in Minnesota. The rockers from Sheffield, England, will play The Armory on Aug. 25, 2023, with the Fontaines D.C. supporting. Tickets will be available to the general public on Friday, Oct. 7 at 10 a.m. You can buy...
MINNESOTA STATE・21 HOURS AGO
Bring Me The News

Very warm for October before abrupt change in Minnesota

Sven Sundgaard's in with the latest Minnesota weather forecast, which will include an abrupt temperature change Wednesday to Thursday and then a shot at the first frost in the Twin Cities on Saturday morning.
MINNESOTA STATE・2 DAYS AGO
Bring Me The News

What the stretching polar vortex means for Minnesota

Histopathology of measles pneumonia, (Giant cell with intracytoplasmic inclusions.) Courtesy of Centers for Disease Control and Prevention. Health officials are warning an unusually high number of measles cases among children in the Twin Cities could signal an oncoming outbreak. The Minnesota Department of Health has recorded 13 cases of measles...
MINNESOTA STATE・6 DAYS AGO

A classic activity to usher in the fall season is visiting a local pumpkin patch, and Minnesota has no shortage of places from which to ... pick. Looking to select your own pumpkin and/or partake in some festive fall activities? Here are six Minnesota pumpkin patches to visit this fall.
LINO LAKES, MN・1 DAY AGO
Bring Me The News

It was the driest September in Twin Cities modern history

September was also a VERY dry month, with the Twin Cities 2.6 inches behind the monthly norm. In fact, in the Twin Cities we’ve only had 0.23 inches of rain the entire month, making it the driest September on record. It’s also the fourth driest June 1 through Sept....
MINNESOTA STATE・5 DAYS AGO
Bring Me The News

How Hurricane Ian is impacting weather in Minnesota

MINNESOTA STATE・5 DAYS AGO
Bring Me The News

The abrupt cancelation of seven concerts by Ringo Starr – including one in Minnesota – was because the Beatles drummer has COVID-19. Starr was due to perform at the Mystic Lake Casino in Prior Lake on Sunday, but ticket-holders were informed late Saturday that the show had been canceled because he was "sick."
PRIOR LAKE, MN・2 DAYS AGO

Only the cold-blooded personification of winter knows, but that doesn't stop meteorologists from attempting to decipher the signs and predict what's in the winter pipeline. The latest attempt comes from AccuWeather, which calls the winter 2022-23 forecast "one of the most complicated and dynamic in recent memory" due to the "triple dip" La Nina, a phenomenon that Bring Me The News meteorologist Sven Sundgaard detailed last month.
MINNESOTA STATE・1 DAY AGO
Bring Me The News

Squirrel to blame for Friday power outage impacting over 5,000 homes

The squirrels are at it again. The Minnesota Valley Electric Cooperative worked to restore electricity Friday morning after a squirrel broke the insulator at the Prior Lake 88 substation, causing over 5,000 members to lose power. MVEC reported all power had been restored about an hour and a half later,...
PRIOR LAKE, MN・5 DAYS AGO
Bring Me The News

Gallery: Cozy island cabin is one of northernmost homes for sale in Minnesota

IHeartMedia announced on Friday the dates for its annual Jingle Ball Tour, and there was a noticeable absence on the schedule. The radio and music giant revealed 11 stops for this year's holiday tour, but the Twin Cities isn't one of them. The 101.3 KDWB Jingle Ball has been held...
MINNEAPOLIS, MN・2 DAYS AGO

A Sartell woman was killed in a crash on Highway 10 southeast of St. Cloud on Tuesday evening, according to the Minnesota State Patrol. Arlene M. Towler, 94, died after the Nissan Altima she was riding passenger in crossed eastbound traffic at the 42nd Street intersection and was stuck by a Volvo semi-truck, according to the crash report.
SARTELL, MN・1 HOUR AGO
Bring Me The News

BCA: Missing 15-year-old from Glencoe might be in the Twin Cities

Treasure Robinson. Courtesy of Minnesota Bureau of Criminal Apprehension. Authorities are asking for the public's help in locating a missing 15-year-old last seen in Glencoe last month. The Minnesota Bureau of Criminal Apprehension said Treasure Robinson might've met someone online and might be in the Twin Cities area. Treasure, who...
GLENCOE, MN・1 DAY AGO
Bring Me The News

A construction worker has died after an incident at a site in St. Paul Wednesday afternoon. The St. Paul Police Department said it was called to a "fatal industrial crash" at a construction site near East 7th Street and Wabasha Avenue North at around 3:30 p.m. The employee, a 61-year-old...
SAINT PAUL, MN・7 DAYS AGO
Bring Me The News

After three summers without Grand Old Day, the beloved St. Paul festival is poised to make a comeback in 2023. The Grand Avenue Business Association recently announced its seeking community members and business representatives to join in reimagining the event for next year. According to GABA, the Reimagine Grand Old...
SAINT PAUL, MN・6 DAYS AGO