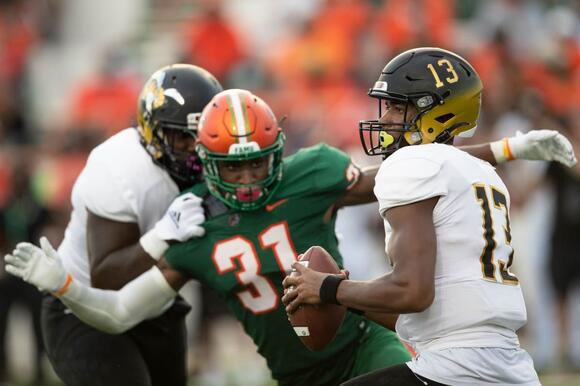 Could the Falcons add the reigning FCS Defensive Player of the Year?

The 2023 NFL Draft is still over eight months away, but scouts around the league are already on the road getting familiar with the top prospects.

For Atlanta Falcons scout Tokunbo Abanikanda , that includes a trip to the Sunshine State. However, he wasn't going to the SEC's University of Florida, nor the ACC's Florida State or Miami.

Instead, his destination was Florida A&M, one of the top HBCU programs in college football.

In an exclusive interview with Falcon Report, Florida A&M Director of Recruiting Devin Rispress revealed that star pass rusher Isaiah Land is "the player most sought after" by NFL scouts.

Teams look at essentially every draftable prospect, so the Falcons were bound to roll through Tallahassee at some point. However, Abanikanda made his visit on the first day of Florida A&M's fall camp, clearly putting an added emphasis on the school.

After arriving on campus at a mere 180 pounds, Land now stands at 6-4, 225 pounds. As a redshirt junior a season ago, he posted 25.5 tackles-for-loss, 19.5 sacks and won the Buck Buchanan Award given to the top defensive player in the FCS.

Land, a Buffalo native, later moved to Atlanta and went to high school less than an hour from Mercedes-Benz Stadium. Past the local allure, Land fits what the Falcons want from their outside linebackers.

"Schematically, he’s a 3-4 edge," remarked Rispress, "that can get after it."

The Falcons ranked last in the NFL in sacks by a significant margin a year ago but added to the room in a big way this offseason, using Day 2 draft picks on pass rushers Arnold Ebiketie and DeAngelo Malone .

The primary calling card of both Ebiketie and Malone is high-level effort, backed up by athleticism and production. Land is much the same.

"(Land) is selfless," Rispress said. "Isaiah is a worker; he’s a guy that has a motor that doesn’t stop on the field and in the weight room. He’s also a great person. Over the summer, Power 5 (conference) schools tried to lure him away, but he wanted to stay and finish with his brothers."

As Rispress alluded to, Land had several offers from major programs this off-season, including Texas, LSU and the reigning national champion Georgia Bulldogs. Land opted for loyalty over royalty and will be running it back with a talented team around him.

After a breakout 2019 season, Davis saw fewer touches in 2020, and 2021 was off to a similar start, so he entered the transfer portal. Initially deciding on former FCS power turned transitional FBS team James Madison, Davis re-entered the portal on July 12 and committed to Florida A&M 10 days later.

While at Pitt, Davis played in a West Coast offense, something Falcons coach Arthur Smith has at times incorporated into his offense. Much like Land, Davis offers a humble, level-headed locker room presence.

"Great kid," said Rispress. "A lot of kids drop down and come in acting bigtime, but not (Davis). He came in, gelled with the guys, put his head down and went to work. I love the kid. He's a talent."

With players like Land and Davis, Florida A&M as a program appears poised to bring the fight once again, starting with a Week 1 contest against the North Carolina Tar Heels.

As Land looks to defend his FCS Defensive Player of the Year award, expect the Falcons to be following along closely, much as they already appear to be.

The Atlanta Falcons' top-five rushing offense has suffered a blow, as Cordarrelle Patterson will miss at least four games. However, Sunday's win over the Cleveland Browns provided a glimpse of what's to come, and it's possible Atlanta's offense doesn't skip a beat.
ATLANTA, GA・27 MINUTES AGO
VolunteerCountry

Cordarrelle Patterson had the best season of his NFL career in 2021, and the versatile veteran running back's success has continued through four games in 2022. However, Patterson has now been placed on injured reserve, according to multiple reports.  Coming into the week four matchup against ...
KNOXVILLE, TN・21 MINUTES AGO
FOX31 Denver

The Denver Broncos lost running back Javonte Williams for the season after he suffered a torn ACL and LCL in the 32-23 loss to the Las Vegas Raiders Sunday, according to ESPN sources.
DENVER, CO・26 MINUTES AGO
Falcon Report

Despite having the NFL's best rushing attack, Atlanta Falcons coach Arthur Smith understands the Browns are not a one-dimensional offensive team.
ATLANTA, GA・2 DAYS AGO

Two game-winning interceptions in just as many weeks for the Atlanta Falcons defensive unit.
ATLANTA, GA・20 HOURS AGO
Falcon Report

The Atlanta Falcons have had four games come down to the final minutes, the last two of which have gone in their favor. Here are three takeaways from the Falcons' 23-20 victory over the Cleveland Browns.
ATLANTA, GA・19 HOURS AGO
Falcon Report

The Atlanta Falcons struck gold with the signing of running back Cordarrelle Patterson. From his on-field breakout to off-field presence, the veteran has transformed Atlanta's rushing attack - while staying true to himself.
ATLANTA, GA・2 DAYS AGO
Falcon Report

The Atlanta Falcons needed a jolt of life on offense, and second-year running back Caleb Huntley provided just that in his first series of the game.
ATLANTA, GA・22 HOURS AGO

The Atlanta Falcons have now run for over 200 yards twice in just four weeks after not surpassing the 150-yard mark in any game last season.
ATLANTA, GA・7 HOURS AGO
Falcon Report

Ahead of Sunday's contest, Atlanta Falcons coach Arthur Smith broke down the Cleveland Browns' offense, from general takeaways to the key players that make the unit run.
CLEVELAND, OH・2 DAYS AGO
Falcon Report

Browns vs. Falcons Halftime Update: A Tale of Two Quarters in Atlanta

The Atlanta Falcons and Cleveland Browns are deadlocked through two quarters in Mercedes-Benz Stadium. Here's a rundown of all the action.
ATLANTA, GA・23 HOURS AGO
Falcon Report

The Atlanta Falcons running game proved to much for the Cleveland Browns on Sunday, finishing with 202 total yards on 35 carries, including a 10-play, 75 yard touchdown drive late in the third quarter.
ATLANTA, GA・3 HOURS AGO